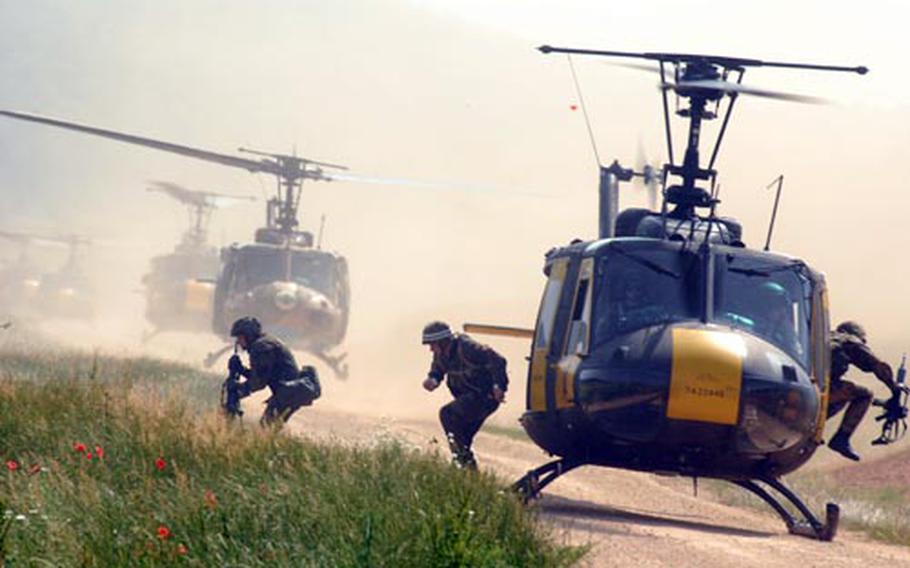 It was only a training exercise at Hohenfels&#8217; Joint Multinational Readiness Center on Wednesday, but it was a taste of the future for the German troops.

German officials said Tuesday that they would send an additional 1,000 troops to Afghanistan, bringing Germany&#8217;s total number of troops there to 4,500. The move has to be approved by the German parliament.

Next month Germany, which has so far held its troops back from combat roles, will take over responsibility for a quick-reaction force in Afghanistan &#8212; a mission that requires combat troops to quickly respond to security threats in the country, Beer said.

"The Germans [in the QRF] will have to do [air assault] operations like this," he added, as he prepared to board a U.S. Huey helicopter at Hohenfels.

Beer, a veteran of several missions to Kosovo and Bosnia and Herzegovina, said the German army recently created a special air assault unit &#8212; Jaeger Regiment 1 &#8212; and it is upgrading from Hueys to newer NH90 Eurocopters.

"The advantage of air assault is, it is fast. On the other hand, it is pretty loud and there is not much concealment," he said.

Americans involved in the air assault training, from JMRC&#8217;s Falcon Observer Controller Team, had plenty of combat knowledge to pass on to the German troops, mostly from Logistics Battalion 472 and reservists from Holzheim.

One of the 472nd soldiers, 1st Lt. Tobius Schmidt, said not every unit has the chance to use helicopters on operations, and it&#8217;s a rare opportunity for a logistics unit, which normally trains with only land vehicles.

Black Hawk pilot and Falcon officer in charge Maj. Karl Wojkun, 32, of Fairfax, Va., said he&#8217;d flown multiple air assault missions in Afghanistan. "I&#8217;ve resupplied soldiers who had not been resupplied in many days and who had been in contact [with the enemy]. It is rewarding to get them their own food and water or resupply them on the battlefield so they can do their job," he said, adding that putting down in a "hot LZ," a landing zone under fire, is a surreal experience.

"You can see people shooting at you, especially with night-vision goggles, and objects appear larger but it is very quiet. You see it happen and your training kicks in. You don&#8217;t hear anything unless it is a loud explosion and then you can feel the concussion waves," he said.

The keys to a successful air assault include coordination, planning and timing, Wojkun said.

The German-American training exercise, which involved about 100 U.S. and German personnel, was aimed at providing camaraderie and training in common tasks, he said.

It was also a chance for the Falcons, who spent most of their time training aviation units at JMRC, to practice air assault skills they used at other duty stations, he said.