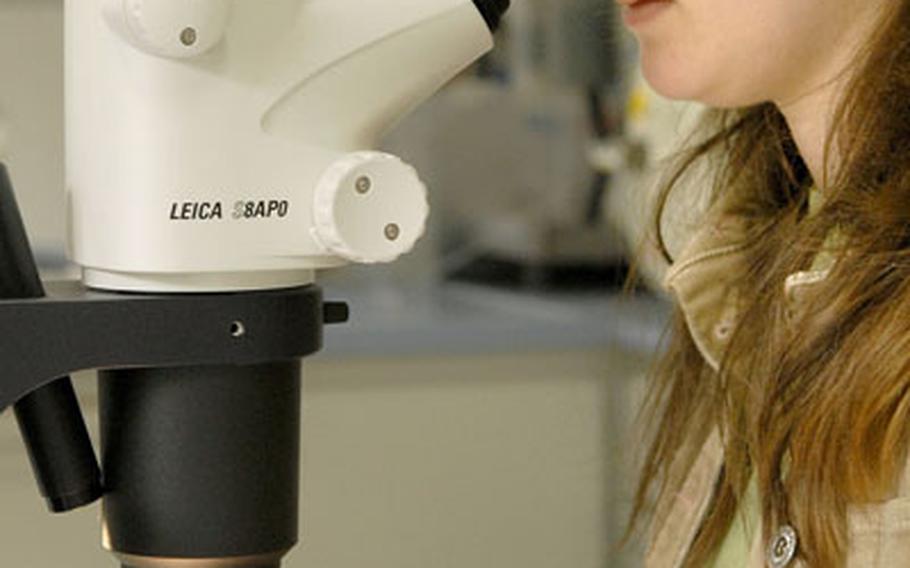 Lab technician Nancy Scott looks at a tick sent in by a health clinic in Mannheim for identification Monday at the Entomological Sciences Division at Landstuhl Regional Medical Center. (Ben Bloker / S&S)

Lab technician Nancy Scott looks at a tick sent in by a health clinic in Mannheim for identification Monday at the Entomological Sciences Division at Landstuhl Regional Medical Center. (Ben Bloker / S&S) This particular tick was identified as an Ixodes Ricinus, which is very common. (Ben Bloker / S&S) 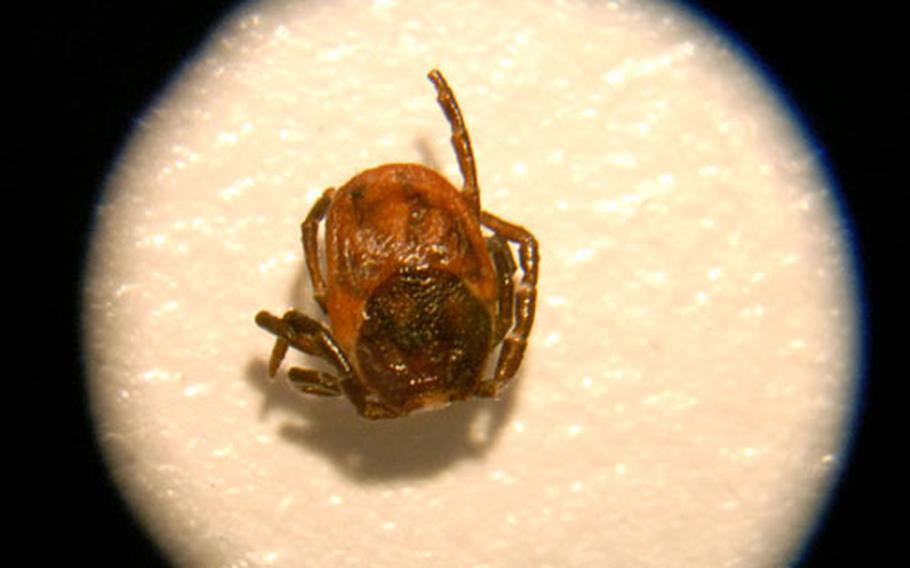 A view through a microscope shows a Ixodes Ricinus, a very common type of tick found across Europe. (Ben Bloker / S&S)

United States medical officials are warning that an elevated tick population in southern Germany could put hikers and pets at greater risk to the disease-carrying arachnids.

Ticks can transmit serious illnesses such as Lyme disease and encephalitis.

A larger than normal number of tick larvae and nymphs, as well as female egg-bearing ticks are expected to have survived the dry, mild winter.

Ticks are six- or eight-legged parasites that range in size from a pencil-point to a lentil. They climb from grass and brush onto unwitting hosts &#8212; animals and sometimes humans &#8212; then attach to the host and begin feeding off its blood, sometimes taking several days to get a full belly.

&#8220;Then they&#8217;ll fall off and you&#8217;ll find them laying around or crawling very slowly,&#8221; said Dr. Leonhard Engel of the Center for Health Promotion and Preventative Medicine at Landstuhl Regional Medical Center.

Engel said only a small percentage of ticks carry the diseases, and their quick removal will lessen someone&#8217;s odds of becoming ill. &#8220;It&#8217;s strongly dependent on how long the tick is feeding on you,&#8221; Engel said. &#8220;If removed very quickly after attaching itself, the risk is very, very low.

In the six southernmost German states, which is where U.S. bases are located, 6,244 cases of Lyme disease were reported in 2007, Engel said.

A total of 546 cases of tick-borne encephalitis were reported for all of Germany.

2. Use permethrin-treated uniforms or clothes before going into the woods. Permethrin can be bought in many German pharmacies. Tuck boots into pant-tops and roll down sleeves.

4. Check yourself for ticks after being in wooded and overgrown areas.

5. Put flea collars on your dogs or apply repellants such anti-tick and anti-flea drops. After romps outdoors, check dogs for ticks, especially around the head and neck where it would be most vulnerable.

6. To properly remove a tick, use fine-tipped tweezers to firmly grasp the tick&#8217;s head as close to the skin as possible and pull up in a smooth, steady motion. Then clean the area with soap and water and apply an antiseptic. Avoid jerking motions or pinching off the head, as this could cause secondary infections.