U.S. hands key base back to Iraqis 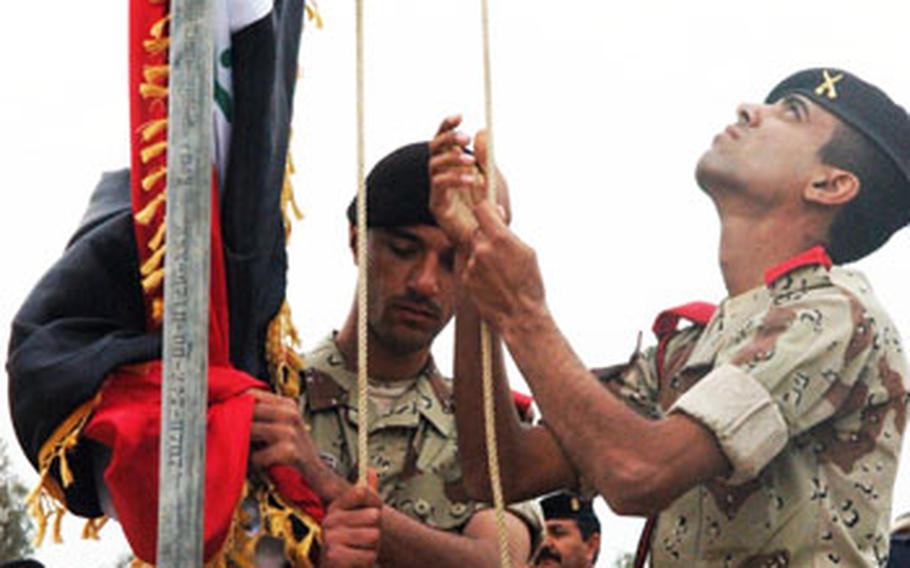 Iraqi military cadets raise the Iraqi flag during the handover of Forward Operating Base Rustamiyah to Iraqi hands on Tuesday. ()

Iraqi military cadets raise the Iraqi flag during the handover of Forward Operating Base Rustamiyah to Iraqi hands on Tuesday. () BAGHDAD &#8212; The U.S. military handed back a key base in southeast Baghdad to the Iraqis on Tuesday, marking a major step toward fulfilling the security agreement that went into effect this year.

The Americans turned over Forward Operating Base Rustamiyah, a seven-acre site that has been home to thousands of U.S. troops throughout the war. The security agreement mandates that U.S. combat troops be out of all major Iraqi cities by June 30, and officials said the base handover was a key for that process in Baghdad.

"This morning the American mission at al-Rustamiyah comes to an end," the Multi-National Division&#8211;Baghdad commander, Maj. Gen. Daniel P. Bolger, said at the ceremony Tuesday morning, on grounds that were home to housing trailers not two months ago.

Also known as Camp Cuervo after Pfc. Rey Cuervo, killed here in December 2003, the base is home to Iraq&#8217;s military academy. U.S. forces essentially gave back the U.S. half of the base Tuesday.

"Pfc. Cuervo paid for today," Bolger said. "So did 4,187 Americans and thousands of brave Iraqis."

In remarks full of praise for Iraq&#8217;s military and its history, Iraqi Maj. Gen. Hussein Jassim said the military officer institutions on Rustamiyah would work to be free of sectarian tendencies, calling the soldiers, officers and civilians who will work there "a basket of Iraqi roses."

"We are serving the Iraq we are proud of," he said.

A day before the pomp and circumstance surrounding the Rustamiyah handover, the base was already in the Iraqi army&#8217;s hands as of Monday afternoon.

During a frills-free signing between Army Maj. Ken Letcher of the 82nd Brigade Support Battalion and the garrison support commander, Col. Jassim Mohamed Jaber, the base was transferred to Iraqi control.

But before Jaber picked up a pen to sign the inventory lists, there was the matter of about 10 air-conditioning units. Jaber said he was promised about 247 units, but the lists showed about 237.

Letcher, so tantalizingly close to signing over the FOB &#8212; a project the battalion spent months coordinating &#8212; wasn&#8217;t going to let 10 air conditioners hiccup the transfer of these seven acres.

With air-conditioning units assured, Letcher and Jaber signed over the base.

"You are now the proud owner of 176 buildings," Letcher said.

It was a poignant moment for Jaber as well, who said he attended the military and joint staff colleges here decades ago. Jaber said it was time for the U.S. to give Rustamiyah back and that the improved security situation justified the move.

"They didn&#8217;t just set all these schedules," he said through a translator. "They are based on circumstances."

When asked if the Iraqi forces are ready to go on their own, he demurred.

"I am not authorized to speak about that," he said.

To close an FOB

There were a lot of long days leading up to Tuesday for the 82nd BSB. Think of all the random amenities on a large base, all those trailers, all that equipment, seen and unseen. Six battalions lived here just a few months ago. Most of that left with the Americans. Unit after unit called this installation home over the past six years.

Twenty million dollars&#8217; worth of government property managed by KBR was removed, items such as shower and latrine trailers, water purification systems and Morale, Welfare and Recreation items. Nearly 8,000 sections of blast wall were moved to various bases and even into the city for elections earlier this year. Most of the material was moved in the past six weeks. As such, many of the soldiers left behind made do with lessening services as March 31 neared.

There were tanks, Bradleys and all types of trucks parked bumper to bumper on roads throughout the base at different times over the past six weeks, waiting to roll out to their next station or back home, Letcher said.

The 1st Battalion, 66th Armor Regiment in March was the final unit to leave.

"All day. That was the work hours," said Spc. Jacqua Griffin of Birmingham, Ala.

Some things will remain. The dining hall, perimeter blast walls and, of course, those air conditioners. Generators will be left at certain points as well, Letcher said.

There were some disagreements initially among the Iraqis about what the Americans would be taking with them, he said.

"They wanted everything," Letcher said. "They wanted the computers, desk lamps, water tanks. As I tried to explain, the U.S. government paid for this equipment. But it was something they always asked about."

The last few days here had a surreal, last-day-of-school feel, with much of the base deserted of people and amenities.

During a post-ceremony luncheon at the American-built chow hall Tuesday, Iraqis smoked freely amid Iraqi military banners and food.

Standing outside the chow hall Monday night, Spc. Chris Garcia said it was weird to see the base &#8212; one he spent time at during his last deployment &#8212; so desolate.

"It&#8217;s definitely changing," said Garcia, of Edgewood, N.M., noting the lack of blast walls and the open feel of the place. "It makes you worry about getting hit by mortars. There&#8217;s nowhere to hide."

Garcia said it&#8217;s a good thing the base is being handed over.

FOB Rustamiyah in southeast Baghdad is the largest base handed over to the Iraqis to date. A look at this seven-acre site and what U.S. forces have removed since Jan. 1:

More than 3,000 military and civilian personnel.

7,880 government-owned items maintained by contractors, such as water purification systems, housing trailers and Morale, Welfare and Recreation items, all totaling about $20 million.