U.S. gets go ahead for Dal Molin construction 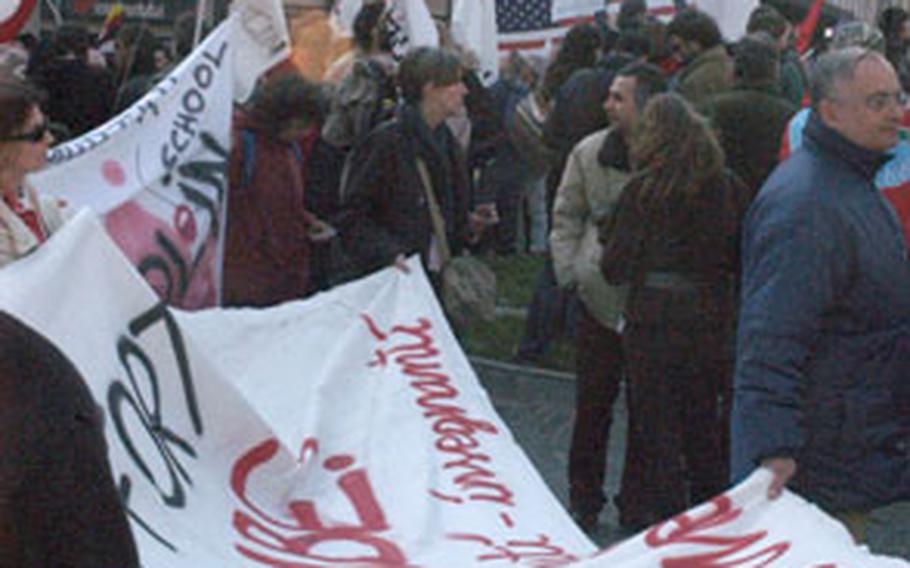 Protesters mill about in a square last February before taking part in a march around Vicenza, Italy, protesting against the U.S. use of the Dal Molin airfield and Italian and American foreign policies. (Kent Harris / S&S)

VICENZA, Italy &#8212; The Southern European Task Force (Airborne) has received all the necessary permissions it needs to begin construction on Dal Molin airfield, according to Maj. Ryan Dillon, a public affairs officer for SETAF.

&#8220;The next step is to identify the contractor,&#8221; Dillon said Wednesday. The Navy, in charge of all military construction projects in Italy, is currently doing just that. The winning bid is expected to be announced before summer.

U.S. use of the airfield, located on the northwest outskirts of the city, continues to draw protesters. Some are opposed to any U.S. military expansion in Vicenza (or elsewhere in Italy), while others have cited specific problems with the site or its impact on residents.

But Paolo Costa, the Italian government&#8217;s commissioner for the project, said the U.S. goal to begin using the airfield in 2011 for barracks and office space &#8212; destroying the current runway in the process &#8212; won&#8217;t be curtailed by Rome.

Costa, a member of the European Parliament since 1999, knows a little about urban planning.

He serves as chairman of the European Parliament&#8217;s regional policy, transport and tourism committee, served as Italy&#8217;s public works minister from 1996 to 1998 and taught economics and urban planning at Ca&#8217; Foscari University for two decades.

He was appointed commissioner for the project in June.

Costa calls his role &#8220;a facilitator&#8221; between the Army and the local population as well as between the U.S. and a notoriously ponderous bureaucracy.

Despite some misgivings voiced by members of the center-left government after it took power in Italy last year, Costa said letting the U.S. consolidate the 173rd in Italy &#8220;was more a question of where, not if.&#8221;

Other sites were under consideration when it appeared a majority of the population of Vicenza was against the project, though he declined to name them in a recent interview on Caserma Ederle.

But Costa, essentially given authority on Dal Molin issues when he was appointed, said the plan approved in December by a joint civilian/military commission addresses several local concerns.

Moving the site to the west end of the airfield provides better traffic flow, reduces the amount of &#8220;green space&#8221; that will be consumed and essentially has the U.S. moving into a space that the Italian air force is vacating.

He said he believes some Italians in Vicenza and elsewhere will continue to oppose the project &#8220;for many different reasons.&#8221;

But he said he has talked to many individuals and groups and believes a majority of the province&#8217;s population supports the expansion.

About 2,000 troops currently based in Germany eventually will move to Vicenza to consolidate the brigade.

In addition to barracks and offices, the site is expected to house athletic facilities and small support facilities. The majority of base support operations will remain at Caserma Ederle.