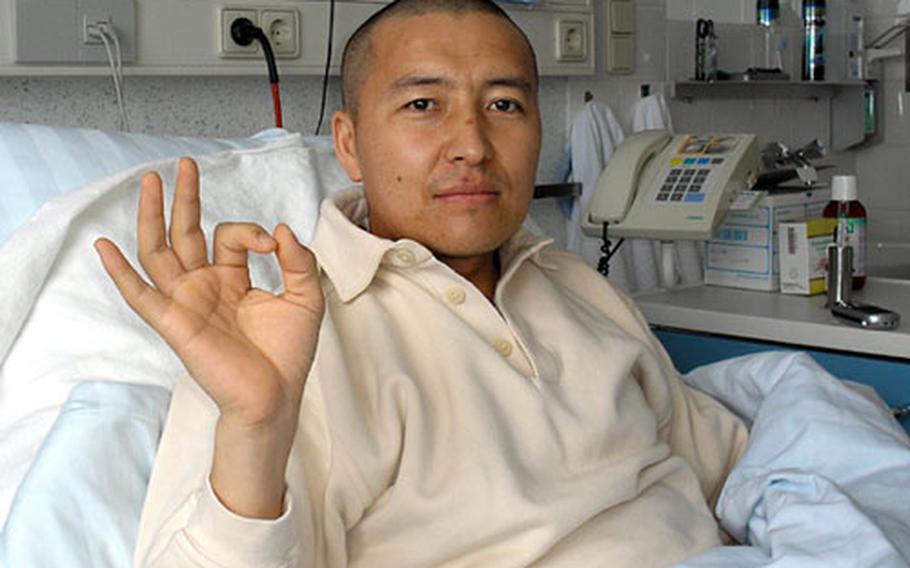 Artur Jeenaliev would have died soon, and he still might.

The young soldier was 3,000 miles from home in March when he was diagnosed with a deadly cancer. But instead of being sent back to Kyrgyzstan, where the treatment he needs does not exist, U.S. and German defense officials have figured out a way to keep him in Germany for possible life-saving treatment.

Jeenaliev is now at a Berlin hospital, his bills paid for now, awaiting a bone marrow transplant on Wednesday.

Jeenaliev was one of about 150 students from 33 nations brought to Garmisch, Germany, for the latest round of classes at the George C. Marshall European Center for Security Studies.

About four weeks into the 12-week session, Jeenaliev started to suffer nose bleeds and weakness. Within a few days he was suffering from shortness of breath. Rose, the center&#8217;s director, soon learned that his student had acute myeloid leukemia, a fast-moving blood cancer that can kill within a few months. Jeenaliev urgently needed chemotherapy and a bone marrow transplant. The chemotherapy was available in Kyrgyzstan, but the transplant was not.

Jeenaliev, a 32-year-old newly promoted lieutenant colonel, is a member of the Kyrgyz Border Guard. He&#8217;s typical of the men and women the Marshall Center trains: a smart guy from a small, former Soviet bloc country, whom the U.S. and Germany want on their side for the long haul.

&#8220;They (Kyrgyz Border Guard) are an elite unit in the battle on terrorism and narcotics trafficking. They are a very key partner,&#8221; said Chris O&#8217;Connor, a student affairs specialist at the center.

On May 12, for example, four of Jeenaliev&#8217;s colleagues were among 14 people killed during an attack on Kyrgyzstan-Tajikistan border posts.

Faced with helping the cancer-riddled, Russian-speaking soldier, Rose and others soon moved to keep Jeenaliev in Germany for treatment. Horst Schmalfeld, the center&#8217;s deputy director, found a retired doctor from Hamburg, Martin Friedrichs, who makes house calls out of charity to former Soviet bloc nations.

Schmalfeld and Rose then successfully persuaded the Stephan Morsch Foundation of Birkenfeld, Germany, to underwrite up to $150,000 toward Jeenaliev&#8217;s medical bills. The German army flew Jeenaliev on a medical plane from Munich to Berlin for treatment.

Friedrichs and an anonymous donor paid for Jeenaliev&#8217;s wife and sister to fly to Germany.

In addition to Jeenaliev&#8217;s recovery, Schmalfeld said he hoped people who support Jeenaliev would donate to the Morsch foundation.