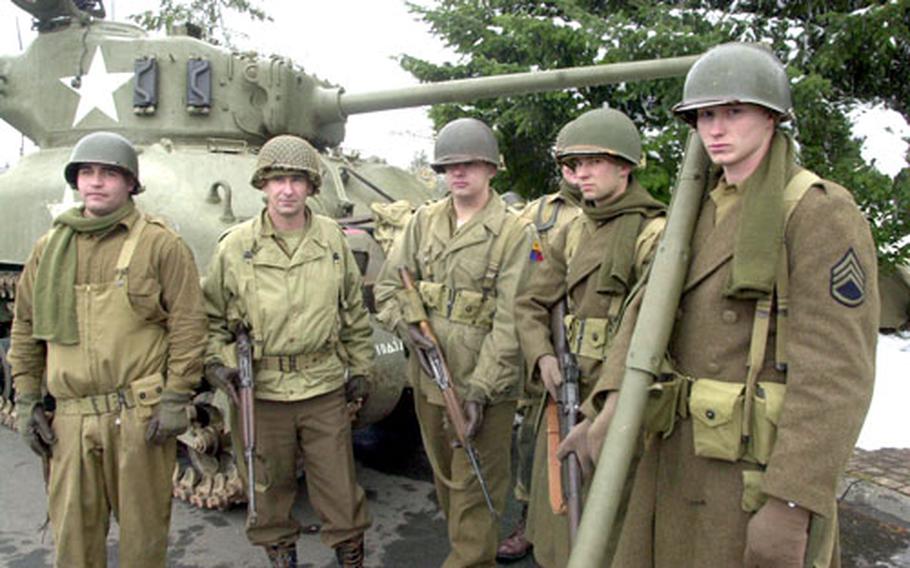 Members of Baumholder’s Phantom Regiment stood together in the parking lot of the base post exchange on Veterans Day in 2004. From left to right are Command Sgt. Major Joseph Hall, Pfc. Edward Thrasher, Sgt 1st Class Kevin DeVos (partially in view) and Spc. Matthew Amaral. All the uniforms and weapons are courtesy of Hall. (Terry Boyd / S&S file photo)

The German group will re-create a military encampment in a field at H.D. Smith Barracks, said DeVos, assigned to S-1, or administration and personnel, for the 2nd Brigade, 1st Armored Division.

DeVos also hopes to get current German soldiers from the German army, as well as re-enactors representing Great Britain and other U.S. World War II Allies, with about 150 re-enactors participating.

The weekend is free and open to the public, and attendees will see some of the rarest equipment and uniforms from a bygone era, DeVos said. &#8220;We&#8217;re bringing in extremely rare vehicles you&#8217;d never see in the United States,&#8221; he added.

World War II vehicles on display will include a German half-track, an American half-track, motorcycles and a K&#252;belwagen, Germany&#8217;s version of the military jeep.

A huge collection of tanks, artillery and other equipment are on display at the 1st AD&#8217;s official museum, which will be open for the event.

Attendees will be able to watch a demonstration of a combat simulator.July 1

Engagement skills demonstrations from 9 a.m. to noon. A re-enactors&#8217; collectibles-and-equipment swap meet will be held at about the same time.Re-enactor combat action demonstrations with blank ammunition at Baumholder&#8217;s military operations on urbanized terrain, or MOUT, site from 2 to 5 p.m.A &#8220;night combat operations patrol,&#8221; although it will not include firing blanks.July 2

Church services by a U.S. re-enactment chaplain (in English and German).A convoy with &#8220;troops&#8221; through the post from 11 to 11:45 a.m.A combat demonstration at noon. All eras will be represented up to the current U.S. Army M2A3 Bradley tank.The only thing missing from World War II will be some of the period&#8217;s more infamous symbols, DeVos said.

Although the post is exempt, the weekend will observe German law, which forbids the display of swastikas and other symbols of Adolf Hitler&#8217;s Third Reich and National Socialist Party, or Nazis, he said. So the &#8220;Viking Division&#8221; will represent the Waffen SS, Hitler&#8217;s elite troops.

Every other element will be as authentic as possible, DeVos said.