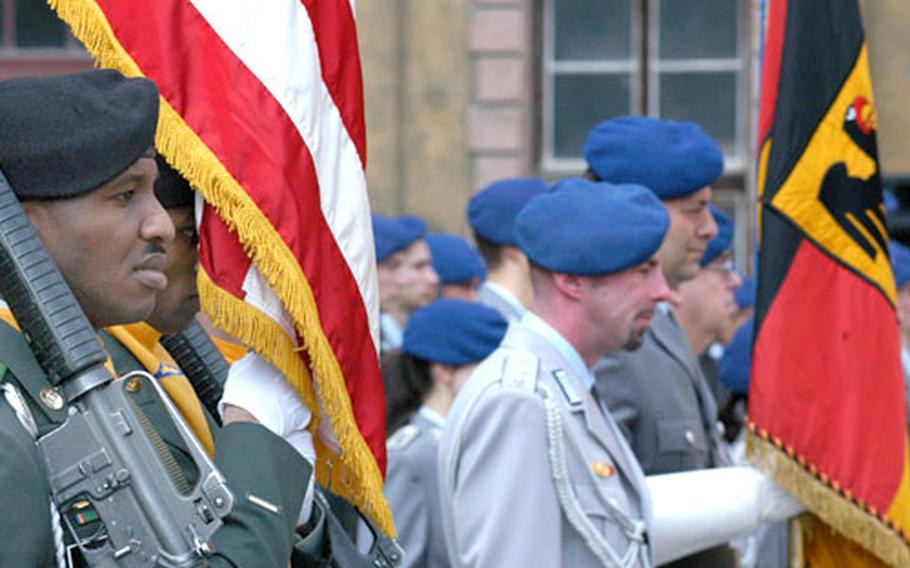 Staff Sgt. Broderick Allen from Company B, 7th Army Training Command, left, stands with the American color guard next to a group of German soldiers at a ceremony commemorating the 60th anniversary of the battle for Weissenfels at the end of World War II. (Ben Murray / S&S)

WEISSENFELS, Germany &#8212; A pair of minute-by-minute time lines handed out Wednesday at the 60th anniversary of the U.S. Army&#8217;s defeat of Nazi forces in Weissenfels provided telling evidence to changes in German-American relations here, and elsewhere in the country.

The first, a bare-bones account of the 69th Infantry Division&#8217;s capture of the town in April 1945 chronicled the Americans&#8217; assault, an offensive that cost them 15 lives over four days.

The second time line was a detailed list of events for this week&#8217;s commemoration of the battle at the German army&#8217;s former headquarters in the town, the Neu Augustusburg castle.

The commemoration provided a rare chance to put the spotlight on one of the small towns that went through an all-too-common experience in Europe 60 years ago as Allied forces marched east, pushing back Nazi divisions during the final weeks of World War II, said Fletcher Burton, the U.S. Consulate representative to the region.

The town was occupied by Soviet forces when the Allies occupied Germany after the war, and remained part of East Germany until German unification in 1990.

On Wednesday, Fletcher and several German military and civilian representatives addressed the crowd of about 200 people in the castle and dedicated a new memorial to those on both sides who fell during the battle for the town.

The U.S. 7th Army Training Command provided a color guard, and a bugler played taps during the ceremony.

The event is one of many 60th anniversary events being held across Europe, culminating May 7-9 with a gathering of international leaders in Moscow.

Several local veterans of the war attended, but an American group of vets from the 69th ID had committed to attend a similar event in a different town Wednesday, Weissenfels officials said.