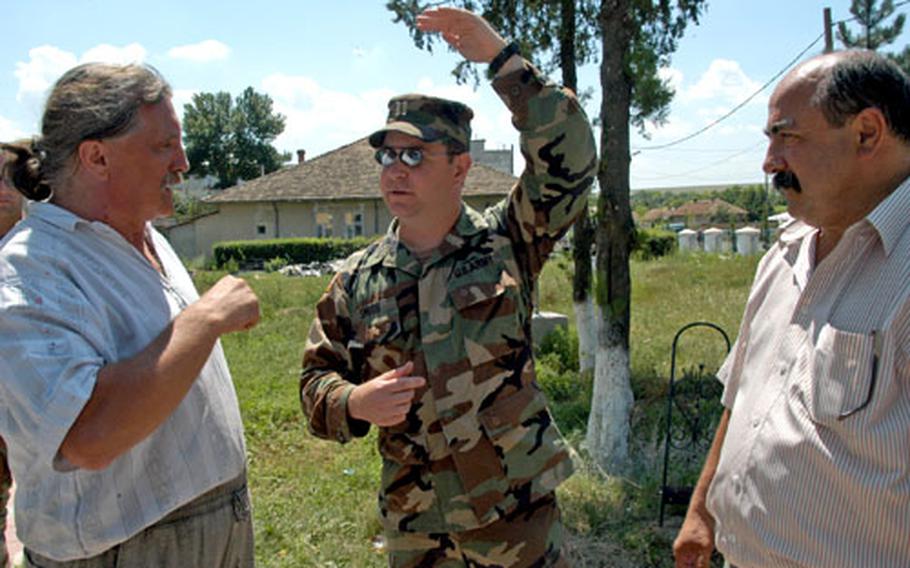 Capt. Todd Smith, of the Texas National Guard’s 36th Infantry Division, explains to Mayor Soare Ion of Cogealac, Romania, right, and local painter Ioan Borloveanu that any decision to build a U.S. base in Romania would occur at a higher level of command. (Russ Rizzo / S&S)

COGEALAC, Romania &#8212; Outside a 70-year-old church in this small town of 4,000 people, a painter embraces a Texas National Guardsman and offers an assurance.

&#8220;The Romanian army is one that you can rely on,&#8221; said Ioan Borloveanu, a Cogealac resident painting the walls of one of the town&#8217;s two churches. Borloveanu has just inquired about the possibility of the U.S. Army building a base near his hometown and is eager to show his support to Capt. Todd Smith, of the Texas National Guard&#8217;s 36th Infantry Division.

A similar scene has played out in a dozen other small towns around the Babadag Training Area, where the 1st Armored Division is heading the largest joint training exercise between the U.S. and Romanian militaries ever held on Romanian soil.

Behind the scenes of the two-week training exercise, the U.S. military is staging a public relations effort to win support of future exercises and gauge how tolerant villagers are to the idea of a more expansive training area that could make the rumble of airplanes overhead and Bradley fighting vehicles on the ground a more frequent occurrence.

Smith and a team of four civil affairs specialists from the Wisconsin National Guard have descended on towns within a roughly 115-square-mile area, talking with mayors, policemen and people on the street to find out if they would welcome an increased U.S. military presence in the area.

With few exceptions, they have found that people are eager to see more American training nearby, Smith said. Young people seem eager to have Americans nearby out of curiosity, while business people and politicians see the economic benefit, Smith said.

One of the biggest impacts of a permanent U.S. presence here would be the jobs created by a training base, Smith said. About 300 locals were brought in to work for this year&#8217;s exercise, called ROMEX &#8217;05, and were paid four times the normal Romanian salary, Smith said.

The top concern among people has been that a presence of U.S. troops in the country will make them a target of terrorism, Smith said. But those concerns have been few and far between, he said.

The construction project helps develop a perception among townspeople that &#8220;the Army didn&#8217;t just come here to tear up the land and leave,&#8221; Beaty said.

By and far, Smith&#8217;s experience has mirrored his visit to Cogealac, he said, where the town&#8217;s mayor invited his team for lunch one day last week. At the end of the four-hour lunch, complete with traditional dishes including a cornmeal dish called mamaliga, minced meat wrapped in cabbage leaves and grilled meat, the mayor lavished Smith with praise for the American Army.

Wearing brown leather boots and a wide smile under his thick mustache, Ion said that a U.S. Army base near his town would be as exciting for his people as &#8220;Americans landing on the moon.&#8221;

He implored Smith to persuade the Army to return to Romania.