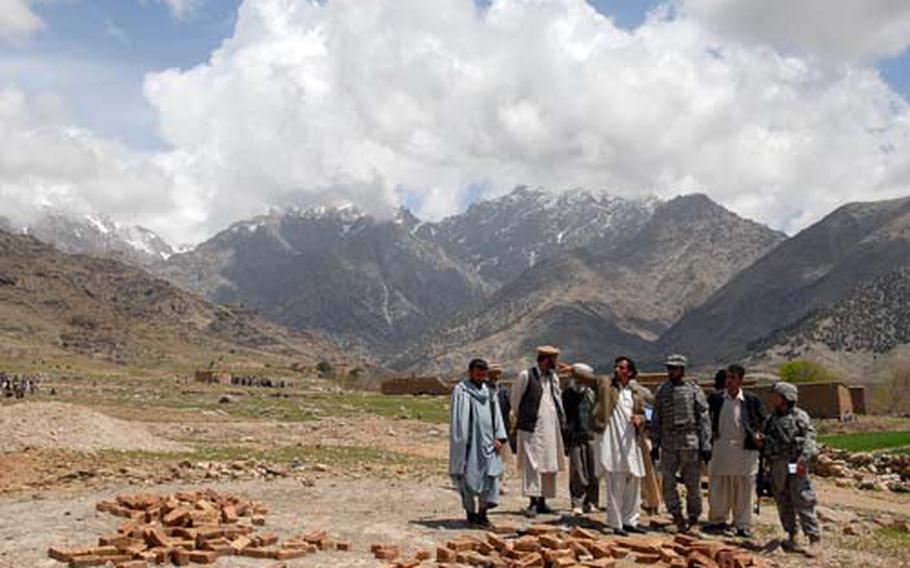 Provincial reconstruction team members check on a school project April 20 in Kapisa province. U.S. soldiers in Kapisa are pushing such projects forward to win over the populace and extend the Afghan government’s influence. (James Warden / S&S)

Provincial reconstruction team members check on a school project April 20 in Kapisa province. U.S. soldiers in Kapisa are pushing such projects forward to win over the populace and extend the Afghan government’s influence. (James Warden / S&S) 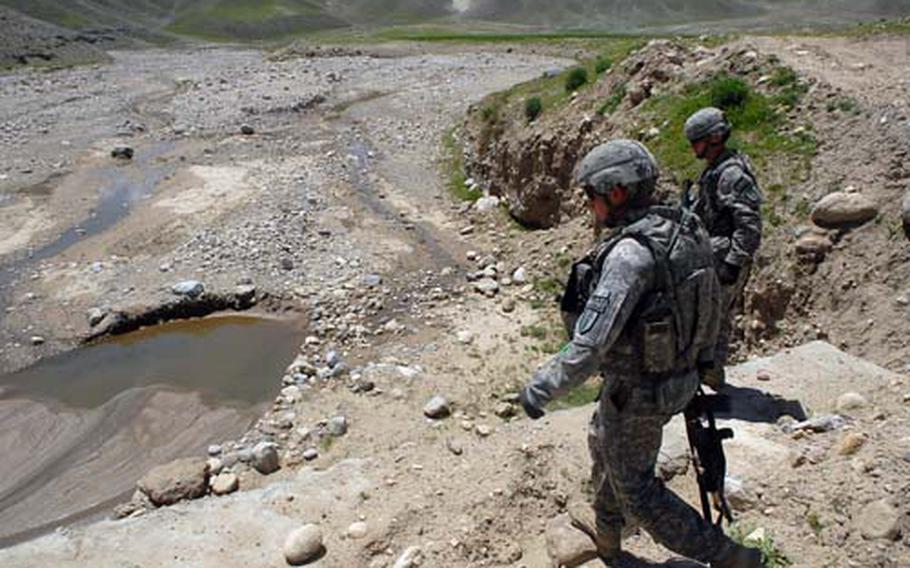 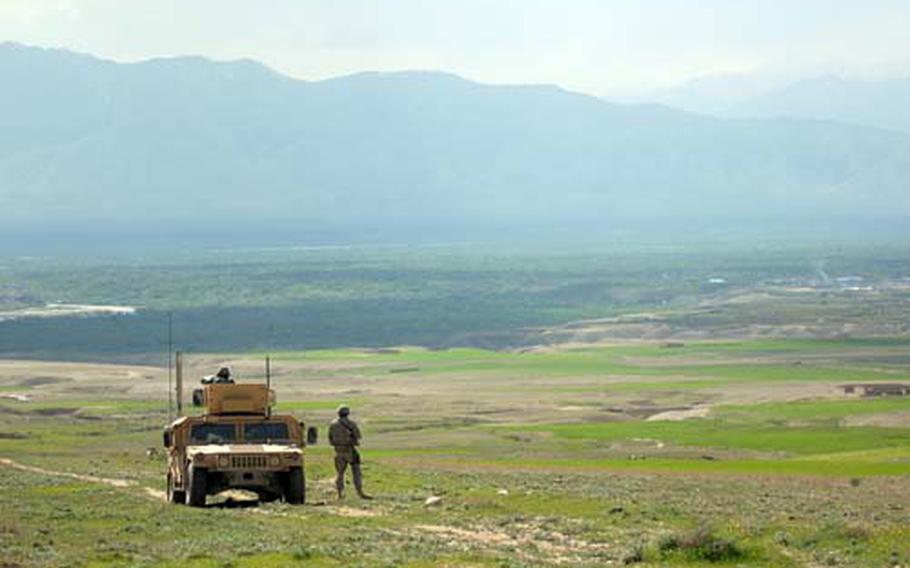 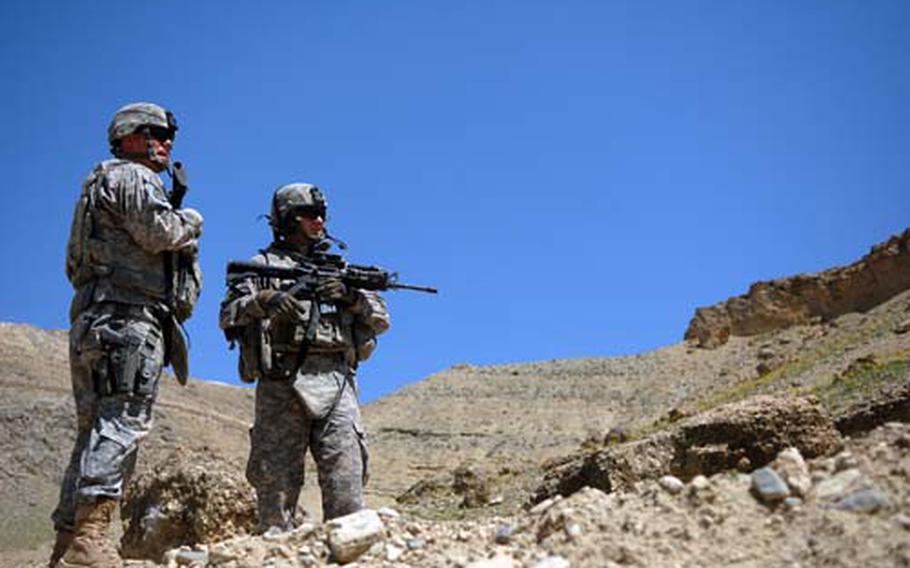 Permissive" is a word you hear a lot in Task Force Warrior&#8217;s area of operation.

The four provinces that the brigade-level unit controls &#8212; Bamyan, Kapisa, Panjshir and Parwan &#8212; have some of the more varied security environments in Afghanistan. Leaders describe each of them on a scale ranging from permissive to nonpermissive &#8212; safe and unsafe, respectively. Generally, the environment becomes more hostile as it moves from Bamyan in the west to Kapisa in the east.

The distinction is an important one. The permissiveness of the environment dictates what coalition forces can do and how they can do it. The battalion commander responsible for Parwan best captured the dynamics of how the operating environment affects the counterinsurgency strategy.

"In some places, you secure to develop. In others, you develop to secure," said Lt. Col. Buck Dellinger.

Panjshir, the easternmost province, is the exception to the geographic pattern. It&#8217;s populated with people friendly to the United States. The valley can also be entered from the south only at the "Lion&#8217;s Gate," which Afghan forces have been careful to secure much as militias in this legendary valley held off the Taliban before the United States arrived.

Bamyan, too, is relatively peaceful. It suffers mainly from criminal activity centered on trying to profit from the area&#8217;s natural resources, such as government coal mines, said Col. Stephen Jeselink, the Task Force Warrior deputy commander.

Poor roads have made it extremely difficult to develop the province, but a multimillion-dollar regional road network should accelerate reconstruction. Col. Scott Spellmon, the task force commander, described a conversation with Bamyan&#8217;s governor that illustrated the extreme need for this new network. When he asked the governor what she needed, her priorities were roads, roads and, of course, roads.

American leaders are pushing both Bamyan and Panjshir to take on more responsibility for development, Jeselink said. The goal is to minimize the military&#8217;s role in development and emphasize other government agencies and nonprofits &#8212; more akin to peacetime development efforts like those in Africa, than the military-led efforts for which Afghanistan is known.

As it stands, the United States already has minimal forces in the provinces. Bamyan has 142, while Panjshir has 70.

Kapisa, the least secure province of the bunch, also shows clear signs of progress. Insurgents have been concentrated in the eastern valleys, far off the road that parallels the western bank of the province&#8217;s main river.

The French unit that once oversaw the area largely abandoned the valley after suffering severe casualties. The situation was so bad that the provincial reconstruction team couldn&#8217;t venture in to provide the development so crucial for counterinsurgency.

Task Force Tiger, a new French unit, fought back into the area with Afghan forces starting in March 14, creating three new bases from which they could settle in and hold the area. It was pacification at the tip of the spear.

"We went in with overwhelming force ... and essentially &#8212; through kinetic means &#8212; convinced them to choose other employment or they were going to die," Jeselink said.

The process seems to have worked. Alasay district elders asked for two days to convince enemy fighters to get out or turn over their weapons. More than 50 fighters sought reconciliation with the Afghan government, which was successfully negotiated over about a week. The former insurgents pledged allegiance to the government.

Afghan tribes tend to be less hierarchical than Arab tribes, and reconciliations are made individually instead of tribal leaders bringing over their fighters en masse. Consequently, the reconciled Afghan fighters are a far cry from the "Sons of Iraq" reconciliation movement that some American leaders are trying to duplicate here. But fighting has since died down, and coalition forces have had little contact with insurgents in recent operations.

"When you can conduct your operations without shooting any bullets, it&#8217;s a good criteria of success," said Col. Nicolas Le Nen, the French commander.

There are reports that the militants moved into other parts of Kapisa, but Jeselink said units have so far not seen much activity to support those claims.

"Until we get in there and see, you just never know," he said.

The key result of the offensive was that it paved the way for coalition forces to help the Afghan government start building a presence in the area. Kapisa&#8217;s governor visited the district for the first time in a year and a half. He fired the subgovernor who was in charge of the district &#8212; a decision the governor probably didn&#8217;t have the legal power to make, but which has so far passed without criticism from Kabul or Alasay elders.

"Our main goal is to persuade the people that we can help them," Le Nen said. "We are not here to kill the bad guys. We are here to prevent the bad guys from refusing development."

But leaders are looking increasingly beyond individual projects to government processes that expand the reach of the Afghan government throughout the region. The task force will soon get its first extra State Department employee as part of the so-called "diplomat surge" that President Barack Obama proposed to boost diplomatic efforts in Afghanistan. Jeselink envisions civilian economics or tourism advisers to help the governors in ways his soldiers can&#8217;t.

"We&#8217;re trying to show that this region is primed for development," Jeselink said. "Their capabilities are endless."