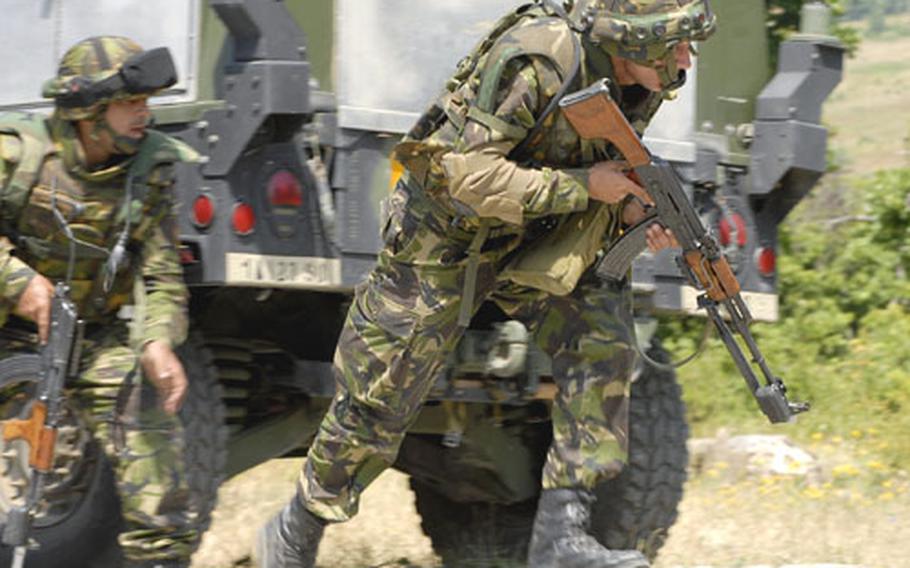 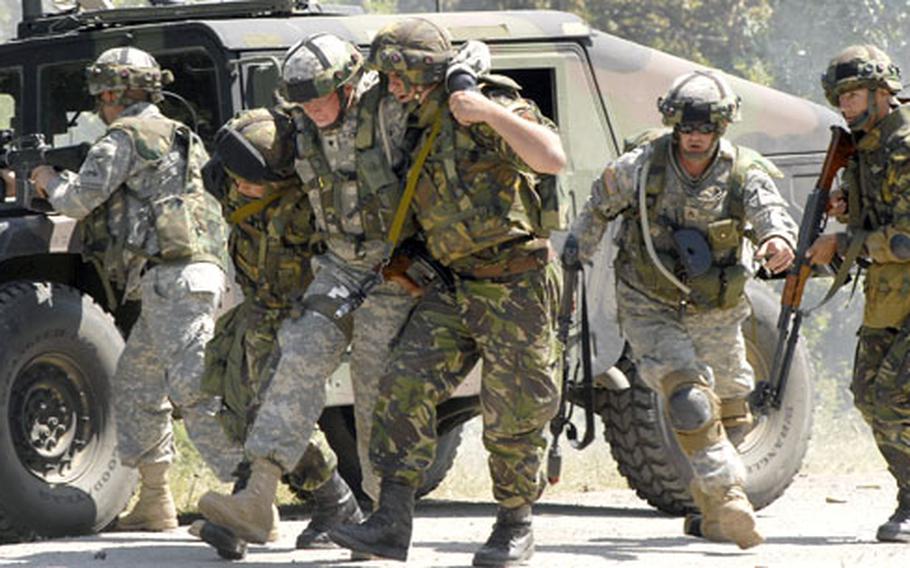 A squad of soldiers attempts to evacuate a "wounded" colleague to safety from the attack area of a convoy ambush training exercise held at the Novo Selo Training Area, Bulgaria. (Gary L. Kieffer / U.S. Army)

NOVO SELO TRAINING AREA, Bulgaria &#8212; It could have been Iraq or Afghanistan.

The roads were old and crumbly, the landscape barren. Short buildings made of chipped bricks had no windows.

But soldiers with flags from U.S., Bulgaria and Romania on their shoulders, fighting side by side?

It might happen someday if they fight together under the NATO flag.

In an exercise called Immediate Response 2006, U.S. troops joined troops from Bulgaria and Romania, both of whom are newer members of the NATO alliance. This week, the soldiers were shelled by fake roadside bombs, and went after enemy fighters while working around innocent civilians.

For Sgt. Kelly Konkus and others from 1st Battalion, 94th Field Artillery Regiment, based in Idar-Oberstein, Germany, it amounted to cross training. &#8220;Being an artillery unit, we don&#8217;t get to do infantry tactics, or flying in a helicopter and getting dropped on a [landing zone],&#8221; Konkus said. &#8220;We&#8217;d normally be the ones laying down fire and clearing the path.&#8221;

Inside the Humvees at the exercise, there might be an American behind the wheel, a Romanian in the turret, and a Bulgarian commanding the vehicle.

At the staff level, however, during a real war, officers from different nations could find themselves sitting around the same planning table. U.S. and Romanian officers already have, in Afghanistan, as part of NATO forces.

Some trained together last summer during the ROMEX 05 exercise in Romania.

&#8220;If we have to work and fight together again, we know each other and have trained with each other; we are friends,&#8221; said Capt. Cristian Reducu of Romania&#8217;s 26th Infantry Brigade.

Romania and Bulgaria have recently agreed to share some of their military bases with U.S. forces for training over the next 10 years. Troops from the nations will be seeing a lot of each other.

Soldiers from Bulgaria&#8217;s 61st Mechanized Infantry Brigade aspire to join the fight, said Col. Petar Petrov, the brigade&#8217;s chief of staff. Some of his nation&#8217;s troops have already fought with forces from western Europe. Soldiers from Petrov&#8217;s brigade have not.