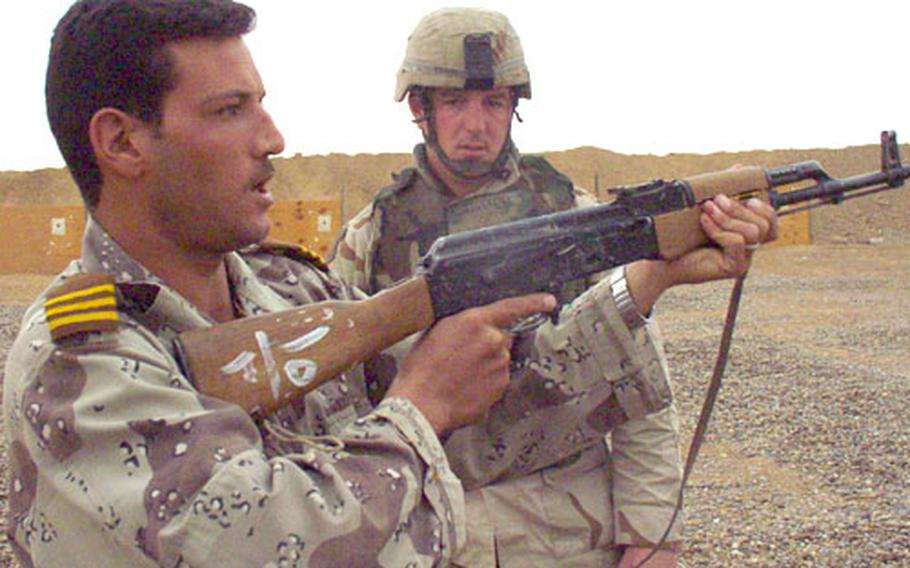 Sgt. 1st Class Jacob Stockdill, 30, of the 1st Squadron, 4th Cavalry Regiment, talks with an Iraqi trainee he is working with near Ad Duluiyah, Iraq, in November. (Steve Liewer / S&S)

Sgt. 1st Class Jacob Stockdill, 30, of the 1st Squadron, 4th Cavalry Regiment, talks with an Iraqi trainee he is working with near Ad Duluiyah, Iraq, in November. (Steve Liewer / S&S) 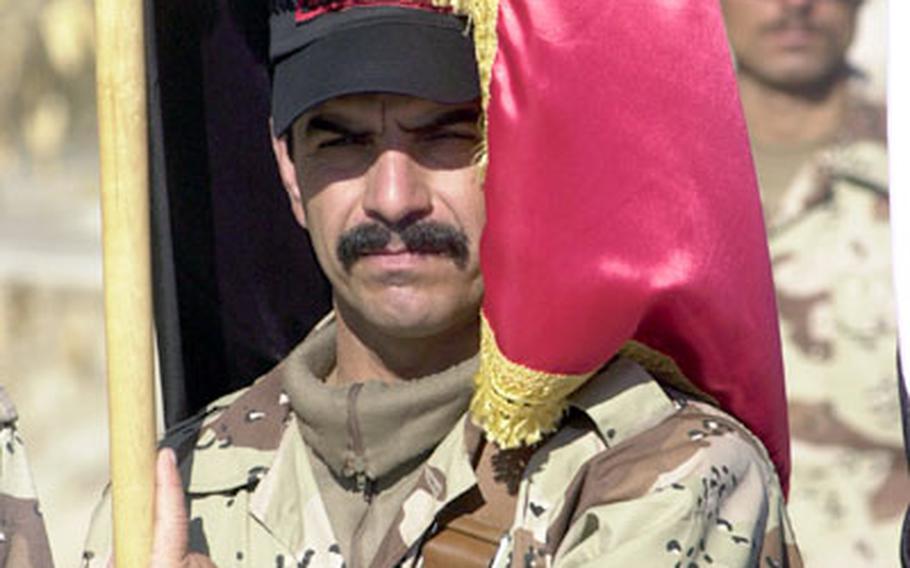 An Iraqi recruit wrapped himself in the new colors of the 4th Iraqi Division last month during a graduation ceremony. (Terry Boyd / S&S) 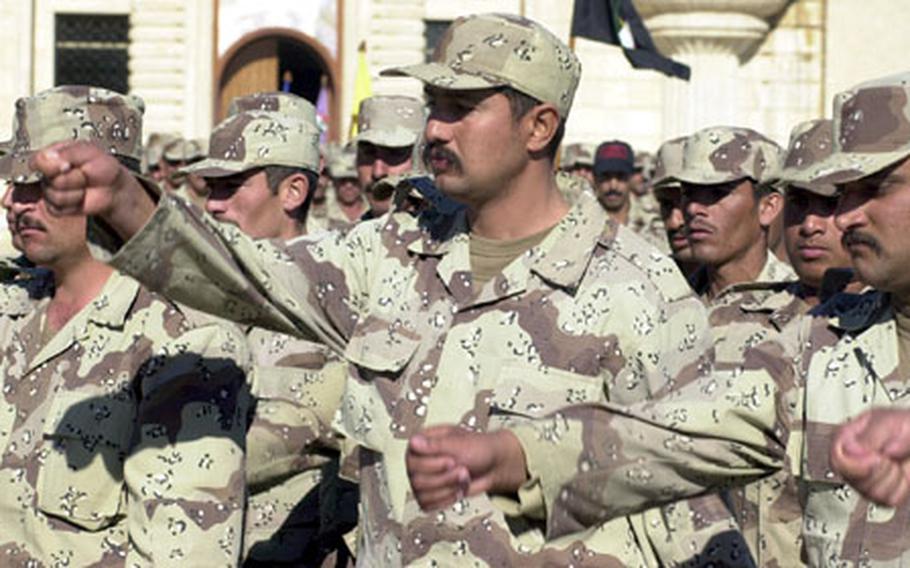 Graduating Iraqi troops showed a lot of energy, but not much polish during a graduation ceremony in January. It remains to be seen, say American officers and trainers, if they transform Iraqi country boys into an effective fighting force. (Terry Boyd / S&S) 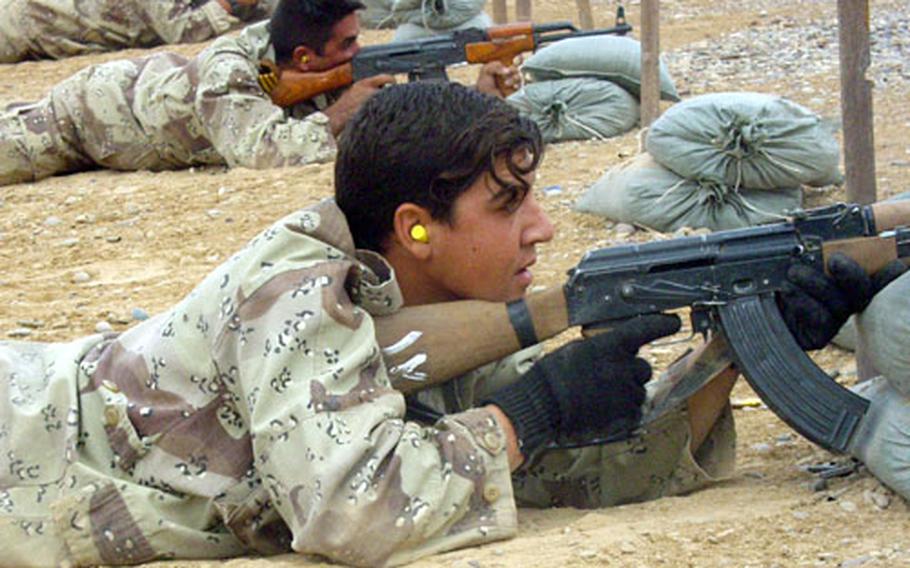 Walid, a recruit from the 203rd Iraqi National Guard Battalion, practices his marksmanship drills at a base near Ad Duluiyah, Iraq, under the guidance of instructors from the 1st Infantry Division&#39;s 1st Squadron, 4th Cavalry Regiment. (Steve Liewer / S&S)

The sooner that fledgling army can take care of itself and protect its country, the sooner U.S. troops can go home, military leaders said.

But don&#8217;t pack your bags yet. U.S. trainers say American soldiers could be in Iraq for the next decade, a sobering assessment of a fragmented, though rapidly evolving, effort.

It will be years before the new army will have the skills or the leadership to lift the security burden off U.S. troops, trainers said. But the situation is improving.

The Iraqi soldiers who graduated from The Island last month were some of the best U.S. trainers have seen, said Brown and Sgt. 1st Class Kenneth Taylor, who also worked as a trainer.

Some combat techniques, such as how to lay down suppressing fire or cover fire, are also taught.

But unlike at U.S. Army boot camp, U.S. trainers at The Island devote much of their time trying to undo ethnic and religious tensions, the residue of Saddam&#8217;s corrupt, divide-and-rule culture.

Trainers throw together Sunnis, Shiites and Kurds, and it takes recruits time to get comfortable with one another.

In addition, trainers try to teach things such as rules of engagements, civil rights, laws of war and ethics.

The Island is one of perhaps a dozen training operations across Iraq, but programs are not standardized.

Recruits &#8212; many uneducated men from rural areas &#8212; often are told training would last two weeks instead of four, and that they can go home in the afternoons, Brown said.

Trainers worry soldiers motivated by money, not pride in the country, &#8220;may not give 100 percent effort in training which &#8230; may cost them their lives in combat,&#8221; Brown added.

Plus, the recruits who do turn into &#8220;super, squared-away soldiers&#8221; end up in Iraqi units with no real noncommissioned officer corps and no chain of command &#8212; an environment that sometimes punishes rather than encourages initiative, Brown said.

Despite all the start-up glitches, the trainers agree they&#8217;re seeing steady progress.

There are plans for advanced NCO training comparable to Primary Leadership Development Course. But there is nothing similar to large-scale field exercises such as the National Training Center at Fort Irwin, Calif.

Much is left up to American units who coach and mentor the Iraq soldiers as they integrate into units fighting alongside U.S. troops.

With limited time resources and training infrastructure, trainers at The Island have to settle for producing &#8220;the best soldiers we can,&#8221; Brown said. That&#8217;s not merely the new policy mandate out of Washington, trainers say.