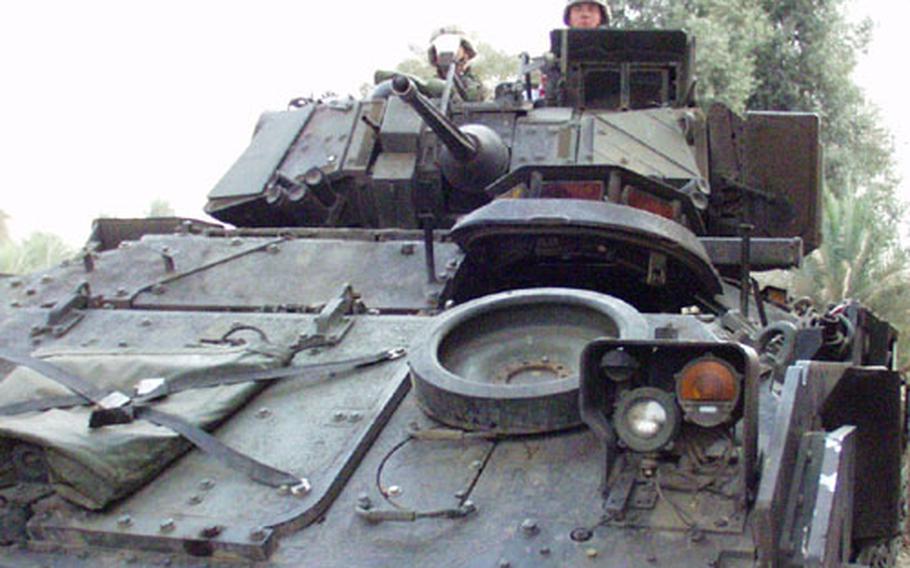 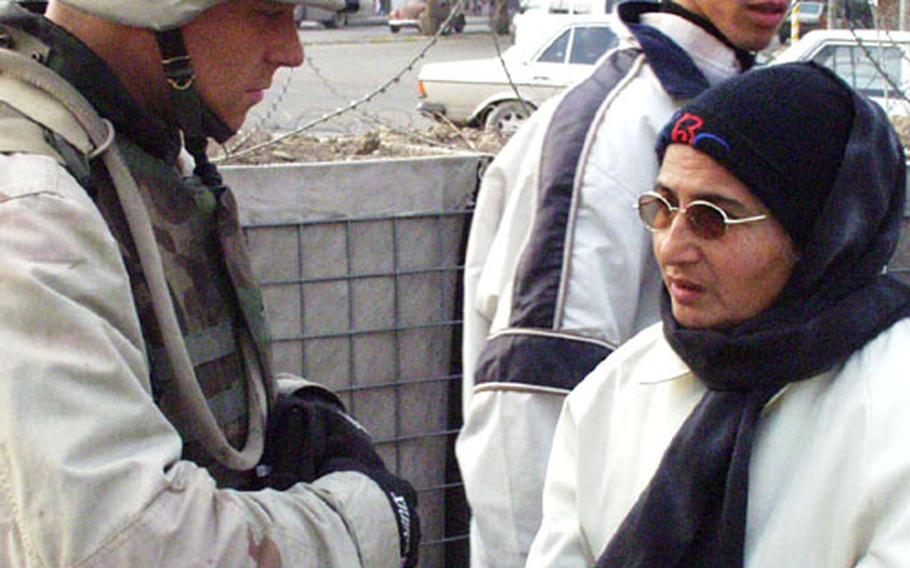 Spc. Mike Sellers speaks to a woman about a complaint on life in Iraq. Sellers, who frequently guards the entrance to the U.S.-led coalition’s facilities in Baghdad, has witnessed several protests. (Ward Sanderson / S&S)

Is free speech with exceptions free? Then again, those who would promote religious violence against infidels or a return of the Saddam days would likely gag or shoot anyone who disagrees. Free speech would be out the window.

It&#8217;s a delicate blueprint America follows as it tries to construct a popularly chosen &#8212; but definitely not fundamentalist, definitely not Baathist &#8212; order in Iraq.

&#8220;We have to strike a balance between the protection of free speech and the protection of a free press in the new Iraq, and the protection against incitement of violence against the coalition or against fellow Iraqis,&#8221; said Dan Senor, spokesman for the U.S.-led coalition. &#8220;And so that is the determination we must make. For instance, if there is a newspaper that&#8217;s inciting violence, about where does one draw the line, where does one cross the line and begin to incite violence and turn the clock back on Iraq?&#8221;

The line might be murky when it comes to religious activism &#8212; though some allegedly pious music selling here in loads clearly calls for death to Yanks. That&#8217;s illegal, mufti-motivated or not. And the coalition certainly gives a clear definition of the banned speech that is purely political. Public pining for Saddam, like Hitler before him, is completely off-limits.

&#8220;To the overwhelming majority of Iraqis, the Baath party represents a few things: torture chambers, rape rooms, mass graves, chemical attacks,&#8221; Senor said. &#8220;It is very important for the Iraqi people to know that Saddam Hussein and his evil regime and the Baath party are gone and they are not coming back. And anyone that would seek to use the messages and the images and the symbols of the Baath party to indicate anything else will not be tolerated during this reconstruction.&#8221;

For soldiers on the ground, deciding what is and is not allowed speech comes down to what a boss says.

Pfc. Jason Ogris, sitting behind the controls of a Bradley fighting vehicle at the coalition base access known as Assassin&#8217;s Gate, said he doesn&#8217;t normally understand what the Iraqis are protesting when he&#8217;s on guard duty. He can&#8217;t read the signs. So he relies on commanders to tell him whether a protest is of violent intent.

Spc. Mike Sellers, another 1st Armored Division soldier, said he&#8217;s seen about 20 protests numbering from about 50 people to thousands. In the past, they denounced the Americans or called for the return of Saddam. Now, protesters mostly call for back pay, new jobs or direct elections.

But protesters and soldiers can still clash.

The troops will typically identify the leader and tell that person to order protesters to back away from the gate.

If that doesn&#8217;t work, soldiers will arrest and detain the leader for the day. Wielding both megaphone and muzzle may be a contortion act, but it&#8217;s not a new routine.

While the parallel may be true of Baathists, it applies less to Islamists.

Germany had ample experience with democracy prior to Hitler. Even so, the postwar transition wasn&#8217;t instant. A peace treaty wasn&#8217;t signed until 1952; West Germany didn&#8217;t enjoy full sovereignty until 1955.

A day in December

In Iraq now, as in Germany then, democracy isn&#8217;t emerging fit and tanned without scrapes and tumbles.

On Dec. 17, students at Amriya High School in Baghdad threw rocks at U.S. armor after soldiers detained 10 of their friends from the campus. Two soldiers reportedly returned the sentiment by firing over the students&#8217; heads.

The students were detained after they had attended a pro-Saddam rally the previous day.

Protesting in favor of Saddam while invoking the spirit of democracy may seem a contradiction. But one 15-year-old, who gave his name only as Mohammed, said it was more about the frustrations of daily life. Many of the parents of students at Amriya owed their jobs to Saddam.

A reporter saw soldiers take Mohammed, Ibrahim Ahmed, 14, and another boy, throw their books into the street, and roughly search them. The boys begged the soldiers to leave them alone. The soldiers laughed.

When troops left with several students, remaining students and the soldiers traded rocks and rounds.

Principal Baker Fathel insisted that a U.S. commander promised that he merely wanted to speak with the students.

&#8220;He promised me that the Iraqi police will control everything and no one will be arrested and no force will enter except the Iraqi police. And they showed me some pictures of the day of the demonstration, and they wanted to talk with those students and nothing more. What can I do to prevent the U.S. soldiers from taking the students from the classrooms, and how could I know that the U.S. commander is a big liar?&#8221;

Students, however, charged Fathel with helping the Americans bust them.

When the Amriya incident was brought up at a news conference, coalition spokesman Senor reiterated that pro-Baath-party speech is simply not allowed.

As for those detained, Ibrahim said they were thrown into a cell with a group of students arrested the day before. Ibrahim said he and the others were released later the same evening following determined, but admittedly polite, interrogation.

Ibrahim said he waited anxiously for two hours before troops interviewed him for about 30 minutes.

&#8220;They started to talk with us so nice and give us some food and the translator told us, &#8216;All of you will leave soon.&#8217;...They asked me and the others the same questions: Where do you live? Where did your father work before and after the war? Is your father a Baathist? Do you have any relatives who are Ba&#8217;athists?&#8221;

He said soldiers and the school principal rode home with them. Each students&#8217; father was warned not to let this sort of thing happen again.

These days, Ahmed said, the free speech practiced by his friends typically ends at the topic of that day in December.