U.S. forces struggle to save the suburbs 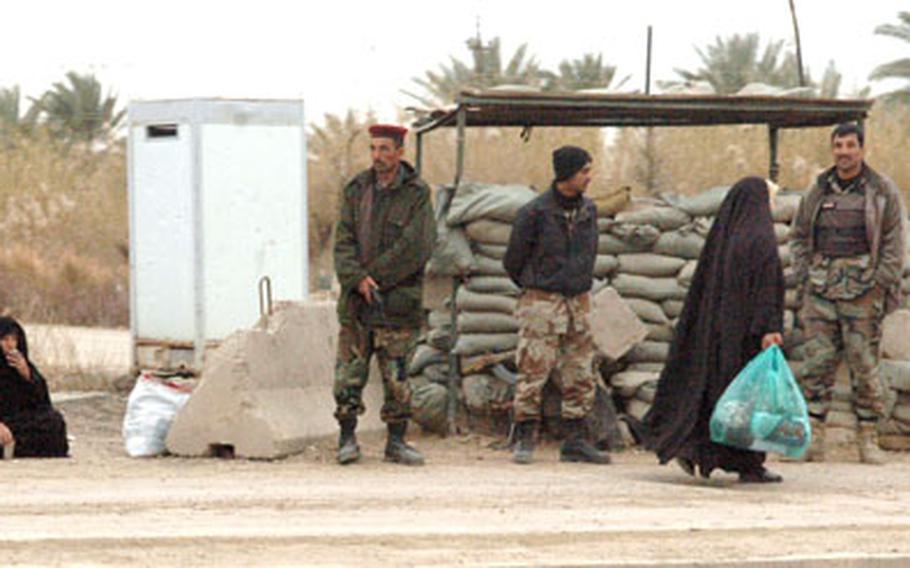 A checkpoint along the main road from Baghdad to Salman Pak is manned by Iraqi national police, whom the local Sunnis accuse of colluding with Shiite militias to rob, kidnap and even kill them. (Lisa Burgess / S&S)

A checkpoint along the main road from Baghdad to Salman Pak is manned by Iraqi national police, whom the local Sunnis accuse of colluding with Shiite militias to rob, kidnap and even kill them. (Lisa Burgess / S&S) Every time members of the Destroyer Team roll out of Camp Rustamiyah&#8217;s gates, they know it may be their day for &#8220;contact&#8221; &#8212; anything from taking a few insurgent potshots to getting hit by a roadside bomb.

Over the past few weeks, contact has ranged from one to five incidents per day, according to Capt. Carson Davis, 32, intelligence officer for 3rd Squadron, 61st Cavalry Regiment, 2nd Infantry Division. The Destroyers, and the units they control, are facing one of the most complex fights in Iraq today. They are working to counter a bewildering, and in some cases strengthening, mix of deadly players.

With military forces, both U.S. and Iraqi, focused on getting Shiite militias under control in Baghdad, the militias are looking for other strongholds where it&#8217;s easier to operate. The Madaein district, particularly Salman Pak, is a natural place for such a shift, the officers said.

The influx of Shiite militias, in turn, attracts more Sunni insurgents, who want their own control of the district, the officers said.

To help prevent a wholesale infiltration of insurgents as the pressure increases in Baghdad, locals have asked the Iraqi government to send in a brigade of the Iraqi army. The Iraqi government has yet to decide whether to assign the troops to this increasingly restive region.

The 3-61 is responsible for the area outside of Baghdad known as Madaein, which is something like a county. The squadron&#8217;s area of operations is huge: about 1,000 square kilometers, with a population of more than 845,000 Iraqis, according to Maj. Bruce Vitor, 35, executive officer for the 3-61.

The biggest population areas in Madaein are the Shiite cities of Narwan and Jisr Diyala, and Salman Pak, a former Sunni stronghold about 15 miles southeast of Baghdad. It is this Shiite/Sunni mix, as well as the region&#8217;s proximity to Baghdad, that make the area so volatile.

The playing field starts in the far south, increasingly the turf of &#8220;foreign fighters who are trying to expand their control from south to north,&#8221; Vitor said. Those fighters sometimes align for the sake of convenience with Iraqi Sunni militias.

Certain portions of the 3-61&#8217;s area are crisscrossed with Sunni militia &#8220;rat lines&#8221; &#8212; back roads that insurgents use to get weapons and other necessary equipment into and around Baghdad, according to 3-61 officers. The Sunni militias also like to try to hit the coalition, because of religious principles and because the U.S. troops interfere with their efforts to overthrow the Shiites.

The Shiite militias, meanwhile &#8212; many with ties to Muqtada al-Sadr&#8217;s Mahdi Army &#8212; are another factor, particularly in Salman Pak, where, according to local complaints, the national police are allowing them to set up false checkpoints to kidnap and kill Sunnis.

Then there are the local tribesmen who are jockeying for an advantage.

They may not be attacking the coalition directly, but they know who&#8217;s doing it, 3-61 officers said, and do nothing to stop it &#8212; out of fear, loyalty or because they are being paid off.

Finally, caught in the middle are the people of the Madaein who want nothing to do with any of the above, but many of whom are now virtual prisoners in their own homes, regardless of their sectarian backgrounds.

&#8220;The Sunnis fear the [Iraqi] national police and checkpoints&#8221; while the Shiites fear Sunni militia members, according to Davis, of Cody, Wyo.