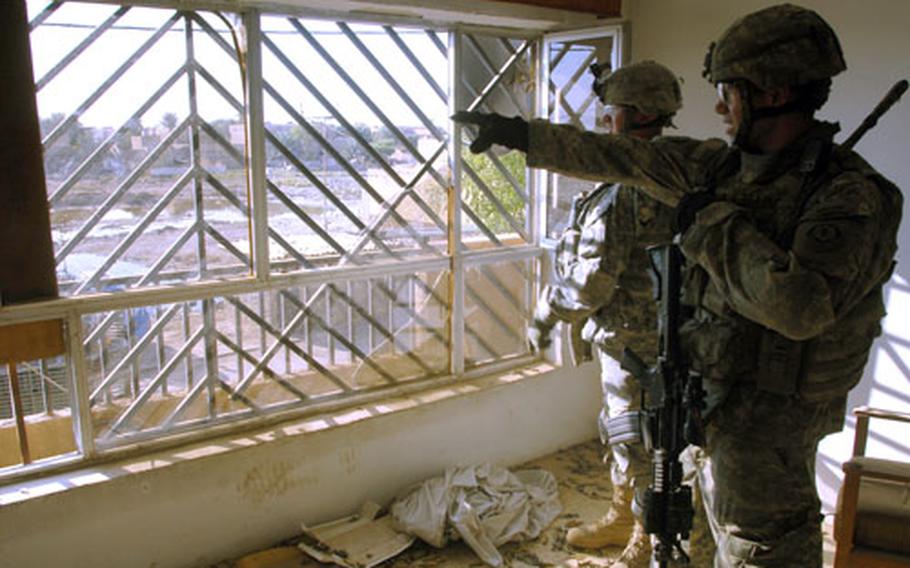 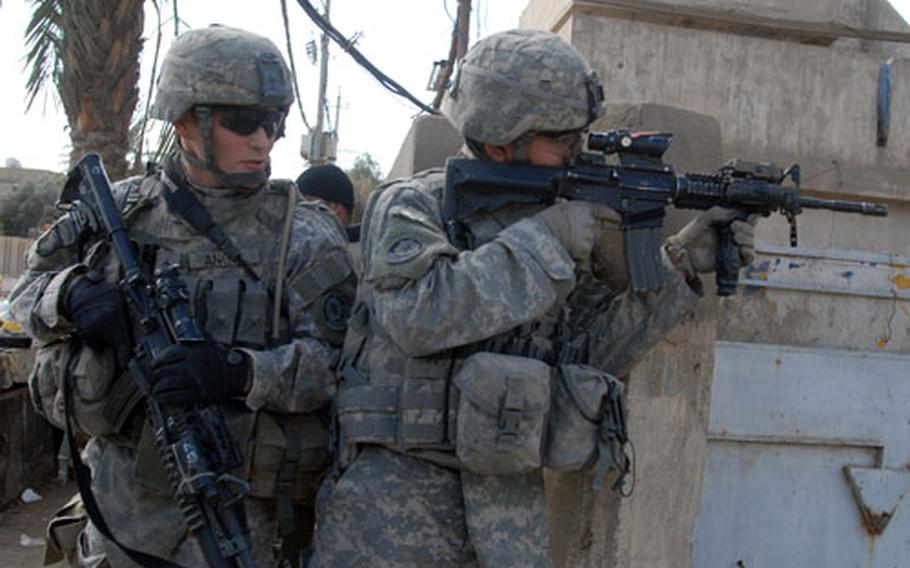 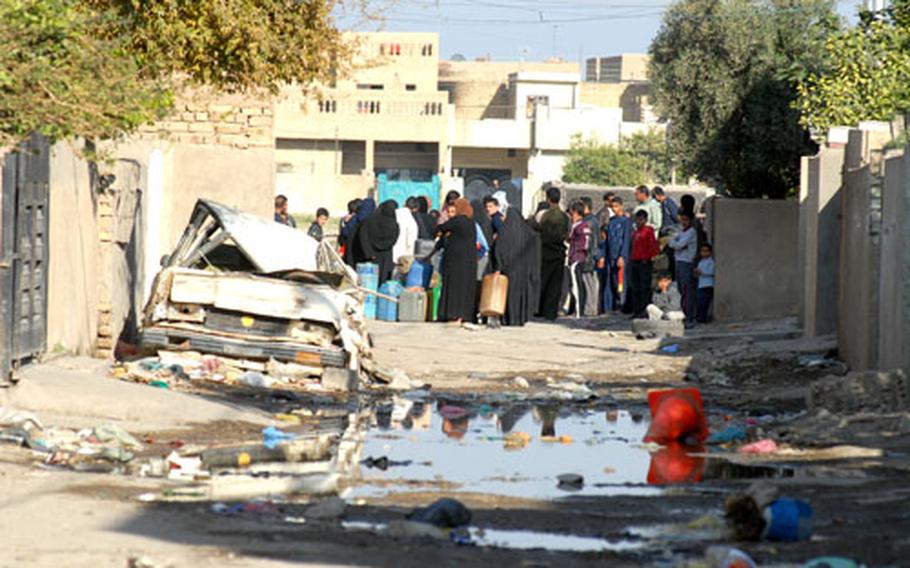 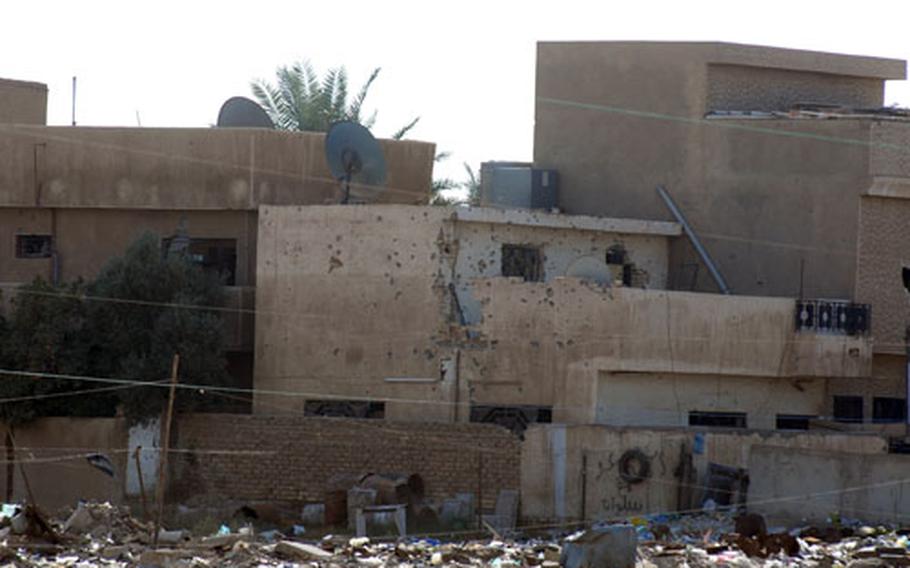 Many buildings in Hadar are scarred by warfare that took place in September when soldiers from 3rd Squadron, 2nd Cavalry (Stryker) Regiment cleared the area of insurgents. () 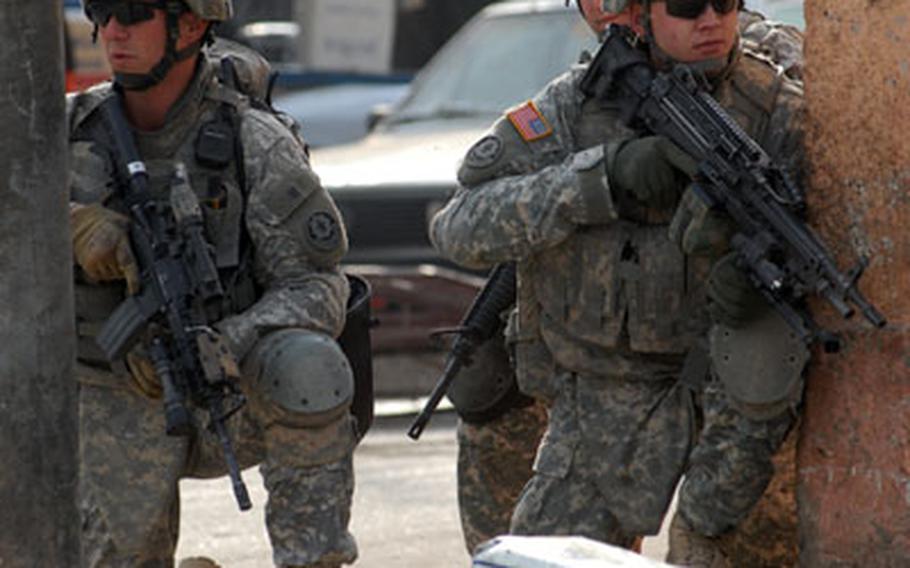 BAGHDAD &#8212; The streets of southern Baghdad where 3rd Squadron, 2nd Cavalry (Stryker) Regiment fought through September to root out a nest of al-Qaida in Iraq fighters were quiet Tuesday.

In the Hadar neighborhood, near the epicenter of the violence, a couple of young Iraqi men sat outside a small shop frowning at soldiers from the squadron&#8217;s 2nd Platoon, Company G. The Americans, on their way to another mission outside Baghdad, were taking a last look at the place where one of their toughest battles happened, on Sept. 16.

&#8220;This street seemed a lot longer that day and a lot wider,&#8221; recalled Staff Sgt. Jared Utter, 34, of Columbia, S.C., who took cover on a nearby rooftop when the enemy opened up with machine-gun fire on his platoon.

&#8220;Time slowed down,&#8221; recalled Sgt. Angel Fernando, 25, of Marietta, Ga., an expert sniper who gunned down a fleeing insurgent during the fight.

The battle was one of many fought by 3rd Squadron, which bore the brunt of heavy fighting by the regiment, losing six soldiers killed in action in three months in Iraq.

The squadron&#8217;s mission was to remove al-Qaida from Hadar, a task that involved clearing hundreds of houses in an area that insurgents had fortified with numerous explosive devices and where many chose to make their last stand.

Soldiers, who cleared the neighborhood in a pincer movement from the north and south, recalled nights sleeping in wrecked rooms, getting so thirsty they drank cups of dirty liquid offered by locals and blowing down walls so they could move from house to house without exposing themselves to fire in the street.

Spc. Scott Fuller, 32, of Fort Walton Beach, Fla., said he pushed down from the north with Company G, clearing about 14 blocks of mostly empty houses.

All was quiet until a deep buried bomb went off 10 yards in front of his Stryker armored personnel carrier, raining shrapnel and concrete on his head as he peered out of a roof hatch.

Utter found a giant cache of artillery shells, rocket-propelled grenades and other weapons in one house as his squad pushed through. The 3rd Squadron soldiers still find weapons in the neighborhood and blew up two bombs found in empty yards on Tuesday.

Utter said he and another soldier avoided having their heads blown off after peeking over a wall, just before a bomb detonated, showering them with ball bearings.

&#8220;We were laughing about it and then they opened up with machine guns and small arms. We huddled up against a wall while they hammered us. Bullets were zinging right over our heads and going through the walls and kicking up dirt around us,&#8221; he said.

In the same fight, Spc. Jay Jacobs was knocked unconscious by a blast that left him with a fractured cheek and shrapnel wounds to his face and neck. His teammates pulled him into a house and he was medically evacuated while Sgt. Robert Ayres (who was killed in action on Sept. 29) fired an AT4 anti-tank weapon at the enemy, recalled 2nd Platoon leader 1st Lt. Eric Owens, 28, of Richmond, Va.

Two days later, Company G&#8217;s 4th Platoon was clearing a nearby street when heavy machine-gun fire erupted around them.

Platoon leader 1st Lt. Andrew Teague, 24,of Glen Ellyn, Ill., said soldiers put as much fire as they could into an insurgent position, but the enemy kept shooting until an Apache helicopter slammed a Hellfire missile into the building.

The house hit by the airstrike still has a gaping tear in it, as do many buildings in the neighborhood, while others are pockmarked with bullet holes.

Soldiers from the 4th Platoon was supposed to watch an intersection, but they couldn&#8217;t get close because the building next to it was merely a skeleton and didn&#8217;t provide cover, Teague said.

&#8220;I walked up to the intersection and could see wires coming from the ground and all of a sudden a [bomb] went off, knocking us over,&#8221; he said.

Insurgents moved from building to building, taking shots at the platoon, which was inside a partially built brick house. Spc. Aaron Walker was hit in the neck by a ricochet and the platoon called for an evacuation. But when they dropped smoke to obscure the rescue, head-high grass around the house caught fire and medics had to rush through the flames to get Walker to a field ambulance, Teague said. Walker later died of his wounds.

On Sept. 26, 3rd Platoon, Company H was in Hadar&#8217;s market street. Shops were closed and soldiers expected an attack that they&#8217;d been warned about.

Sgt. Keith Thompson, 36, from Miami, Fla., said he shot at an insurgent approaching the market but wasn&#8217;t sure if he hit him.

&#8220;The next thing the insurgents did was send children into the street as spotters. That was something I didn&#8217;t expect to see,&#8221; Thompson added.

After numerous engagements, including a 72-hour operation &#8212; Wolfpack Avalanche &#8212; to clear the entire neighborhood, al-Qaida has been soundly beaten in Hadar, soldiers said. These days, any insurgents there keep a low profile, avoiding the Americans and bowing to pressure from locals who want them out of the area, soldiers said.

Hadar&#8217;s market is a hive of activity, with shoppers browsing dozens of shops, mechanics fixing cars and motorcycles on the footpath and children following the soldiers to beg for sweets. The 3rd Squadron soldiers said they were sad to leave, but glad they&#8217;d made a difference in this troubled part of Iraq.