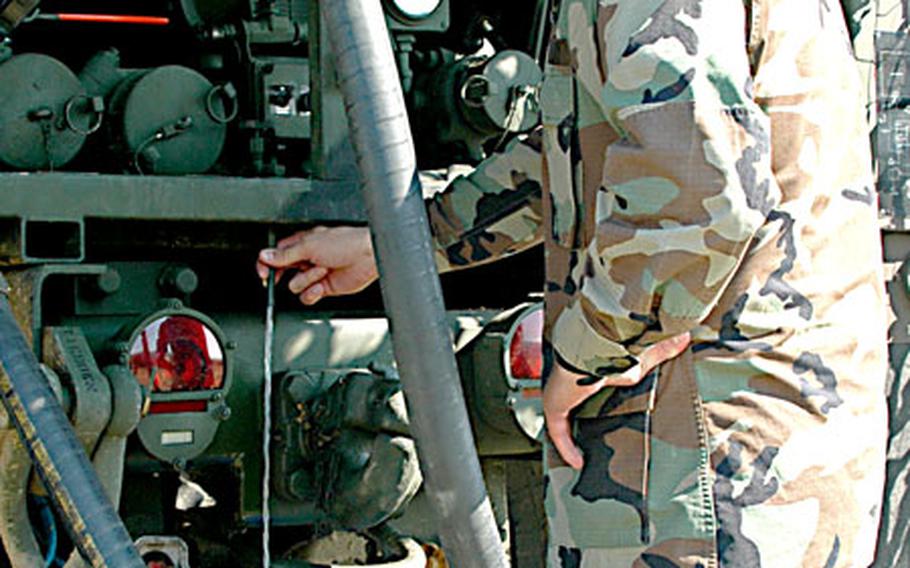 Soldiers from the 45th Medical Company prepare to receive fuel from the 127th ASB at Bezmer Air Base. (Tanya C. Polk / U.S. Army)

Members of the 1st Armored Division are heading to Bulgaria and Romania for a month of training aimed at increasing cooperation with two of NATO&#8217;s newest members and testing the military&#8217;s ability to deploy.

The exercises are part of U.S. Army Europe&#8217;s Theater Engagement Program, which seeks to cement ties between members of the North Atlantic Treaty Organization, which Bulgaria and Romania joined last year.

The bigger exercise takes place in Romania and includes about 1,300 U.S. soldiers and sailors and 300 Romanian troops.

The exercise, the largest of its kind in Romania, is expected to draw much attention in the country, including a visit by the country&#8217;s president, Traian Basescu, said Maj. Jon Chypka, the lead planner for Romex &#8217;05.

From July 19 to Aug. 2, members of the 7th Army Training Center out of Grafenw&#246;hr, Germany, will oversee annual training of about 600 members of the Texas National Guard, as Romanian soldiers participate alongside them in live-fire, convoy support and urban warfare training at Mihail Kogalniceanu Air Base near Constanta, Romania.

U.S. soldiers will also show Romanian soldiers how to tap into the radio communication of the national guard unit to give them experience in electronic warfare, Chypka said.

The 18th Theater Engineer Brigade out of Heidelberg, Germany, participated in a similar but smaller version of Romex &#8217;05 last year in Bulgaria, Chypka said, as members of the Indiana National Guard received their annual training.

New to the program this year, 24 engineers from the Alabama National Guard will work in local communities to repair schools and other facilities.

Later this week, soldiers will begin a five-day exercise that includes Bradley fighting vehicles and tanks, and ends with live-fire training with U.S. and Bulgarian troops. Airmen from Ramstein Air Base, Germany, will practice unloading Bradleys and tanks from C-17 and C-130 planes as if they were on a real-world mission to Bulgaria.

In all, 600 U.S. and Bulgarian soldiers and airmen will participate in the training, including units from the 1st Armored Division, which coordinates the program, other V Corps units, the Southern European Task Force and the 7th Army Training Center, Gainey said.

The exercises are aimed at more than just increasing military cooperation, Chypka said. Along the way, organizers hope to build relationships with their counterparts along the Black Sea, he said.

Chypka said that he received an early sign that it is working from one of the 300 mostly Romanian civilian contractors hired for the program.