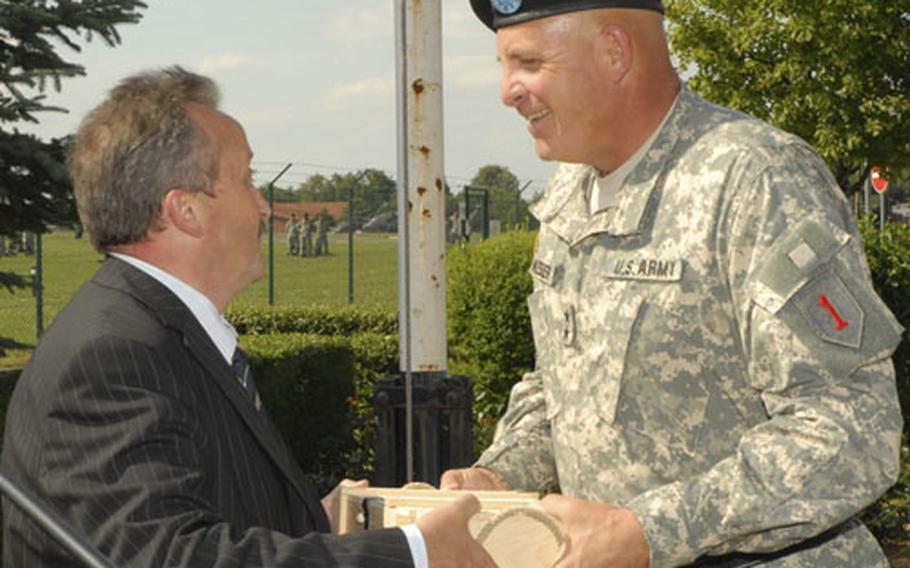 Members of the town, soldiers and friends of Giebelstadt Army Air Field watched as the 69th&#8217;s colors were lowered and retired for the final time, bringing nearly 60 years of tradition and partnership between the local German people and the U.S. military to an end.

&#8220;While many units, soldiers and families have passed through these airfield gates, I think we can all recognize the one thing which has not and will not change &#8212; our profound admiration and respect for the people &#8230; who made Bavaria and Germany a home away from home for us all.&#8221;

Many in the community will regret the withdrawal, Giebelstadt&#8217;s Burgermeister, Paul Merklin, said during the ceremony.

Merklin mentioned that since the end of World War II, there have been 334 marriages between citizens of Giebelstadt and U.S. servicemembers, and that the loss of troops means the loss of jobs and diversity that Americans brought to the community.

McConkey said that although there&#8217;s a strong affiliation between the airfield and the town, Giebelstadt does not only exist because of the airfield. It is an area that is heavy into agriculture, he said, adding, &#8220;Of course there will be an impact, but we&#8217;re not their only customers.&#8221;

The ceremony does not mark the end of the 69th&#8217;s presence in Germany. While portions of the brigade have moved or will move to Fort Sill, Okla., or Fort Bragg, N.C., the headquarters and other portions of the unit are going to Leighton Barracks in W&#252;rzburg.

The other main tenant on the airfield, the 12th Aviation Brigade, is disbanding some units, moving some troops to Illesheim and Katterbach, Germany, and returning others to the States.