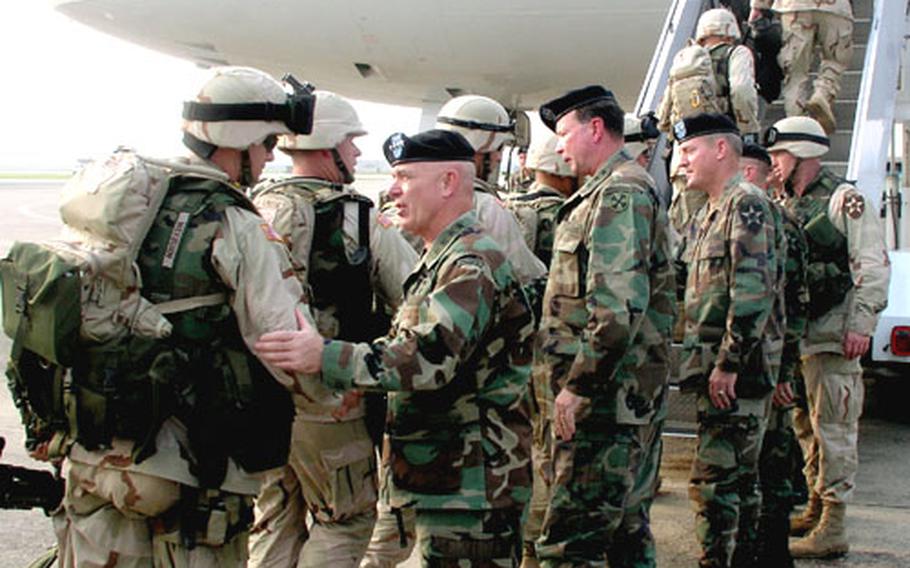 Troops of Army 2nd Infantry Division’s Strikeforce brigade board a jetliner for Kuwait and eventual duty in Iraq on Aug. 10, 2004, at Osan Air Base, South Korea. Seeing them off are senior Army brass including, left, Gen. Leon J. LaPorte, the top American commander in South Korea. To LaPorte’s right is Lt. Gen. Charles C. Campbell, commander of 8th U.S. Army, and to his right, Maj. Gen. John R. Wood, commander of the 2nd ID. LaPorte has announced that, after 38 years of service, he will retire Feb. 1. (Franklin Fisher / S&S)

LaPorte, who is among the U.S. military&#8217;s longest-serving commanders in Korea, will retire to Texas, according to USFK&#8217;s public affairs office.

Gen. B.B. Bell III, the commander of U.S. Army Europe, will take over as the top-ranking American in Korea. The change-of-command ceremony will take place at 10 a.m. Feb. 1 on Knight Field in front of USFK&#8217;s headquarters.

LaPorte&#8217;s time as commander has been marked by seminal events in the Korea-U.S. alliance, which dates to the Korean War.

The two nations also signed an agreement to remove 12,500 U.S. troops over the next three years. The first of that number, 3,600 2nd Brigade Combat Team troops from the 2nd Infantry Division, deployed to Iraq last summer in a historic shift of forces from South Korea to another combat zone.

LaPorte also presided over the roughest patch in recent memory, when a U.S. armored vehicle ran over two young South Korean schoolgirls. The incident &#8212; and ensuing military trial that absolved two soldiers of responsibility &#8212; sparked months of sometimes-violent protests against the presence of U.S. forces in South Korea.

Since then, LaPorte&#8217;s command has made several efforts to reach out to the South Korean public. He started the Good Neighbor Program, which recruits hundreds of soldiers to participate in community-building events with South Koreans. USFK also has reached out to Korean netizens &#8212; the millions plugged into online communications here &#8212; by updating a military Web site to solicit questions and comments from Koreans in Hangul.

LaPorte&#8217;s career spans from his first commission in 1968 as a second lieutenant of armor to a platoon leader in Vietnam to chief of staff during Desert Shield and Desert Storm. He became USFK commander in May 2002.

Prior to that, he served as deputy commander of the United States Army Forces Command, a post for which the current 8th U.S. Army commander, Lt. Gen. Charles Campbell, has been nominated.