U.S. Forces Japan to offer AFN service to off-base residents for no charge 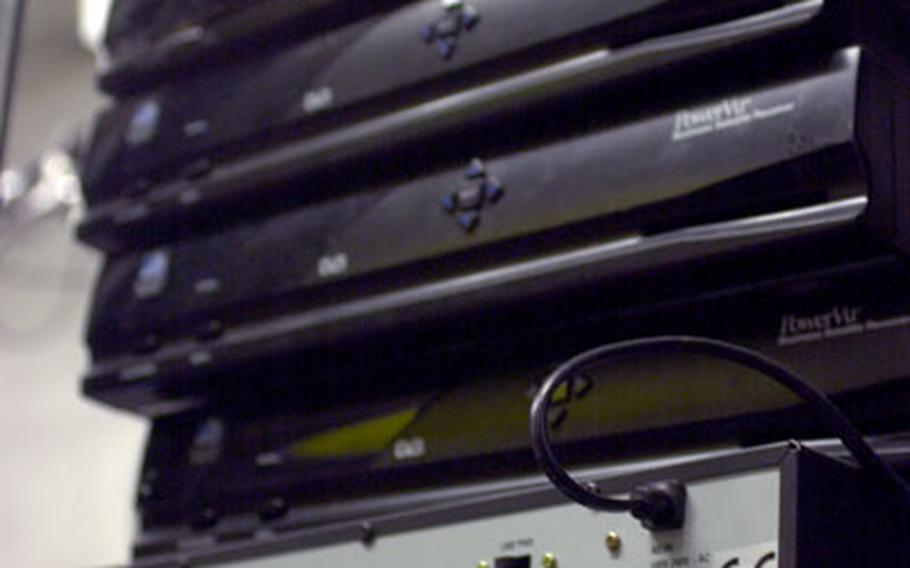 Decoders will be distributed for free by USFJ in their initiative to provide all off-base residents with AFN service. (Scott Schonauer / S&S)

MISAWA AIR BASE, Japan &#8212; Military personnel and Defense Department civilian employees living off base in Japan and Okinawa will soon be able to watch American Forces Network television in their homes on Uncle Sam&#8217;s dime.

U.S. Forces Japan, through $3.2 million from U.S. Pacific Command, is working on a plan to provide and install the satellite signal decoders and satellite dishes needed to receive AFN broadcasts.

Off-base personnel now must lease the decoder and buy the satellite dish. At Army and Air Force Exchange Service outlets in Japan, the satellite dishes retail for $115 and decoders lease for $25 a month. On-base residents already receive AFN free through base cable.

The equipment is expected to be made available at bases this fall or early next year, delivering American Forces Radio and Television Service&#8217;s &#8220;direct-to-home&#8221; package of 10 television and 13 audio channels to just more than 10,000 households in Japan.

Off-base residents at Misawa Air Base in northern Japan welcomed the news.

Adams said he chose to live off base when the military house he was offered was too small for his furniture. Some Misawa personnel, such as single officers and most DOD civilians, are required to live downtown due to the on-base housing availability.

Though the free AFN programming has obvious quality-of-life benefits, Vernon and other officials insist the initiative is not about free entertainment but providing personnel with critical force-protection and command information in a timely manner. As part of that plan, AFRTS in Japan is currently working on a method to deliver local command information &#8212; spots similar to those played on base cable systems &#8212; to three geographical areas within mainland Japan, said Dave Sutton, AFN Tokyo chief of logistics.

The information would first be sent to the AFRTS broadcast center in California and then relayed to the satellite for direct-to-home users, a process that would take at most about 10 minutes, said Keith Lebling, AFN Tokyo detachment chief. Information would be received according to decoder serial number.

Off-base residents could also be informed through Eagle 810 AM radio, broadcast from AFN Tokyo and carried on direct-to-home&#8217;s Channel 35.

Any command-sponsored military or DOD civilian household is eligible to receive the free programming. The equipment would be distributed similarly to how the military delivers and installs government-owned home appliances.

At some bases, people may have to pay about $150 to set up the satellite dish, though AFRTS has posted online home-installation instructions and some bases plan to also hand out the how-to guidelines with the equipment.

USFJ is buying the decoders, which are manufactured by Scientific Atlanta, and shipping them to its bases in Japan. The command has also provided each installation with money to buy the satellite dishes, Vernon said. Some bases are also using their allotment to contract with a local provider to install the dishes. The $3.2 million will allow USFJ to buy equipment for just more than 10,000 households in Japan, about 900 short of the approximately 11,000 eligible off-base homes throughout the command, Vernon said.

How will AAFES handle it?

AAFES officials said in Japan they&#8217;ve stopped ordering new decoders from the manufacturer in anticipation of most leased units being returned to AAFES. Exchange stores will continue a limited lease program for households desiring more than one decoder, according to Pete MacHott, AAFES business program specialist. MacHott said refunds for satellite dishes would be considered under AAFES&#8217; established refund policy, which allows returns 90 days from the date of purchase with a receipt. Military officials said the government-issued decoders should be compatible with satellite dishes purchased from AAFES.