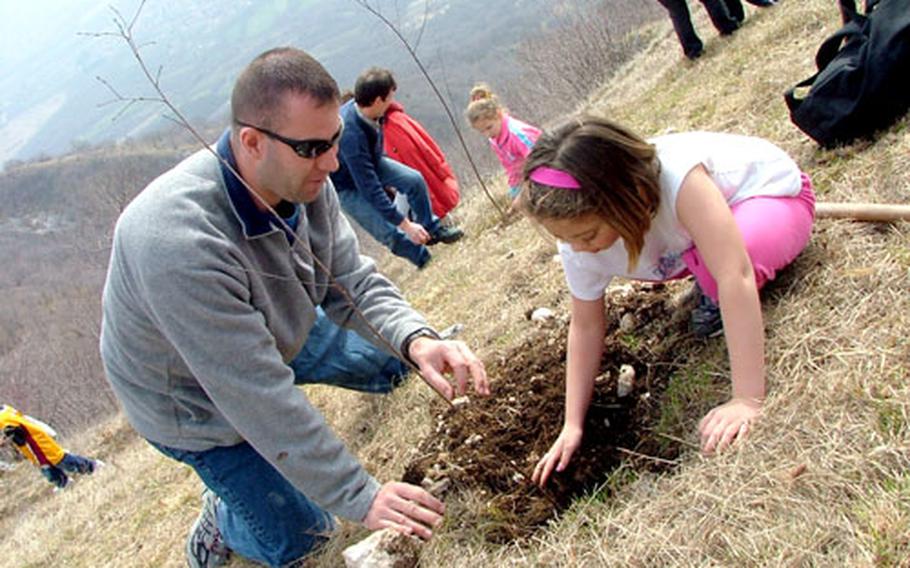 Tech. Sgt. Roy Hensley of the 31st Logistics Readiness Squadron at Aviano Air Base, Italy, and his daughter Kaylee, 10, join other Americans and Italians in a 21-year-old tree-planting tradition at Giais, Italy, earlier this month. (U.S. Air Force)

Near Naples, Italy, they held a 5-kilometer run, while a community north of London staged an environmental fair.

On Saturday, in a variety of ways, Americans across Europe marked Earth Day. In some U.S. military communities, events revolved around rakes and plastic trash bags. Others took a more learned approach, with displays on what individuals can do to improve the world around.

That basic theme was evident at several events Saturday.

At Navy Support Site Gricignano, near Naples, community officials organized a base-wide clean-up effort in addition to the 5K run. At RAF Lakenheath, England, there was a fair offering information on what people could do to help protect the environment.

Similar activities either have been taking place or will be happening at U.S. military installations in the upcoming week.

Lakenheath airmen, for example will be conducting tours of a nearby wastewater treatment plant, book readings for children and a conservation day.

U.S. Army Garrison Heidelberg, Germany, is dedicating a particular theme to each day this week. Monday, for example, the focus is water conservation and Wednesday is alternative transportation.

And personnel at other bases will be helping by cleaning up outdoors or planting trees, as several Americans recently did near Aviano Air Base, Italy.