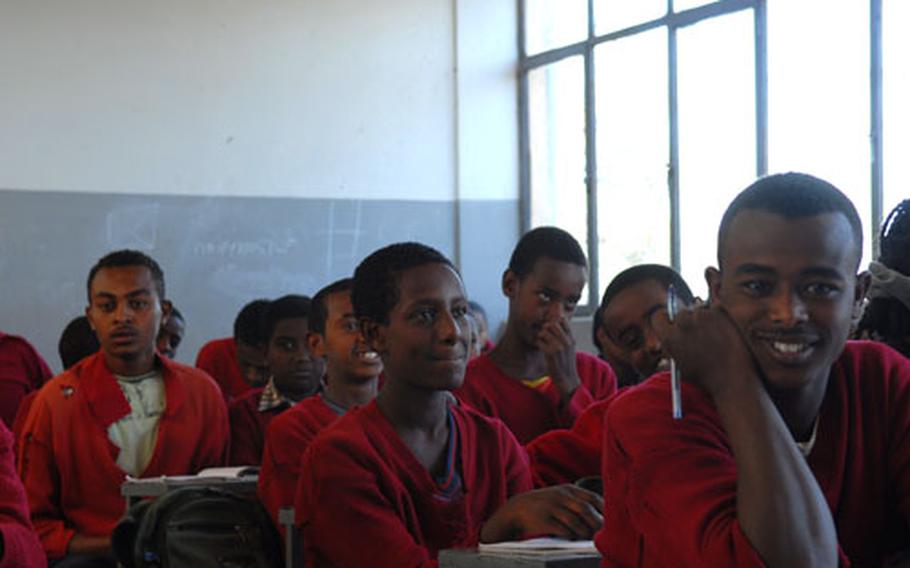 Students at Abiot Ermeja Elementary School in Addis Ababa, Ethiopia, listen to their lessons on Wednesday. According to teachers of the school, many students survive on the streets by their wits when they are not in class. (Zeke Minaya / S&S)

ADDIS ABABA, Ethiopia &#8212; The familiar din of children filled the hallways and classrooms of Abiot Ermeja Elementary School. Clad in reddish uniforms, the students laughed and yelled, called out answers to teachers&#8217; questions and ran between rooms.

English teacher Abdul Wasie Nessredine said he believes in the potential of his students.

&#8220;This is a poor school, but if these children could have access to decent facilities, I believe they can go anywhere, do anything.&#8221;

But, as in much of Africa, belief and faith meet up against harsh realities.

The students do not have science or language labs, and they lack computers, Nessredine said. And, outside of school hours, many of the children struggle to survive in the face of crushing poverty, he said.

In many ways, the students and teachers of the school have been fortunate. In November, dignitaries for the U.S. State Department and the U.S. Combined Joint Task Force-Horn of Africa gathered at the school for a dedication ceremony.

In conjunction with the U.S. Embassy and the U.S. Agency for International Development, Navy Seabees constructed walls and roofing for the school buildings, built a library and installed new sanitation facilities and drainage systems.

At the dedication ceremony, U.S. Army Brig. Gen. Sanford Holman, deputy commander of the task force, said that the school was &#8220;a demonstration of the American people&#8217;s faith in the people of Ethiopia, an investment in the lives and future of our friends here in Addis Ababa,&#8221; according to a U.S. Embassy press release.

School administrators were very grateful, they said, but the improvements are only a beginning to the changes needed to make a lasting impact on the students.

The needs of the school of roughly 750 students ranging in age from 7 to 13 are the same needs reflected in many poor classrooms of Africa, Nessredine said. For students to become successful they must become familiar with computers. Bridging the digital divide &#8212; the gap between information technology and the poor populations without access to these advances &#8212; must be a priority, Abiot Ermeja teachers said.

Language instruction is another area of critical concern for students, Nessredine said. Ethiopia, like much of Africa, is a multilingual society, teachers and administrators said. For their students to advance to university and successful careers afterward, learning English and other languages is a must, Nessredine said.

The teachers hope to have language lab facilities installed in the future, they said.

Another persistent problem is getting girls into the classroom. Widespread cultural attitudes on gender often keep girls from getting schooling, Nessredine said.

&#8220;In places like the countryside they believe that women are not intelligent enough to learn,&#8221; he said. But the girls who have enrolled in Abiot Ermeja are performing quite well, he said.