U.S.: Fire response not hurt by deployment of troops to wars 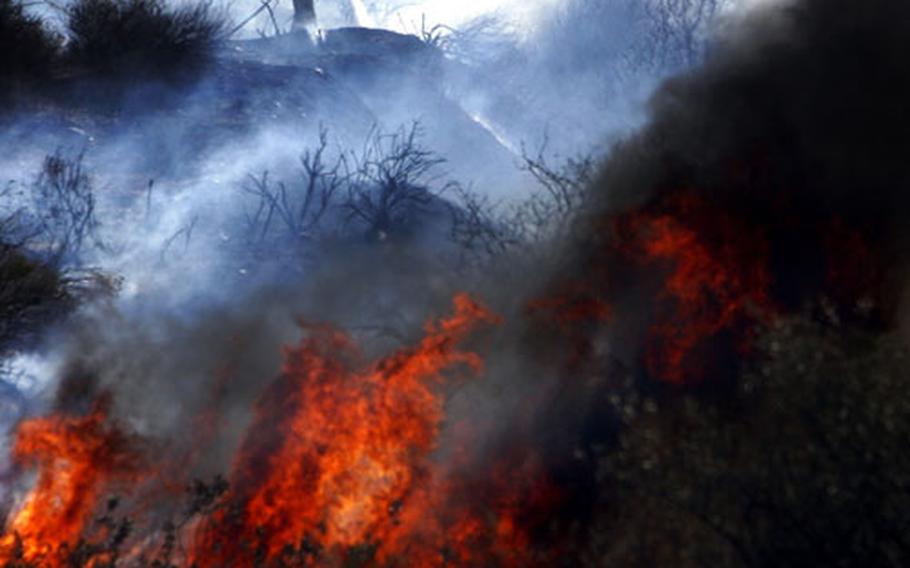 A fire fighter works the Meadow Ridge Fire in Newhall, Calif. Fires in California have burned across nearly 600 square miles, killing one person, destroying more than 1,800 homes and prompting the biggest evacuation in California history, from north of Los Angeles, through San Diego to the Mexican border. (AP)

ARLINGTON, Va. &#8212; The commitment of U.S. troops in Iraq and Afghanistan have not affected the Pentagon&#8217;s ability to direct personnel or supplies to the firefighting effort in California, according to military officials.

&#8220;I can tell you unequivocally that the ongoing warfighting activities in [U.S. Central Command] have had no negative effect at all with regard to our ability to provide sufficient forces to assist civilian authorities in fighting the wildfires,&#8221; Paul McHale, assistant secretary of defense for homeland defense, told Pentagon reporters Tuesday.

On Tuesday, Democratic California Sen. Barbara Boxer said she believed the state National Guard&#8217;s ability to fight the fires has been compromised because it is stretched too thin by the Iraq war.

But McHale said that &#8220;there is no manpower shortage in terms of actual firefighting activities,&#8221; noting that of the more than 17,000 Guardsmen currently available to fight the fires, only 1,500 been brought to active duty.

Lt. Gen. H. Steven Blum, chief of the National Guard Bureau, said at the news conference that the Pentagon accounted for fire season when deciding which Reserve units to send overseas.

The 3,000 soldiers from California who are deployed to Iraq and Afghanistan &#8220;were carefully selected knowing that they would be away during the firefighting season,&#8221; Blum said.

&#8220;We were very, very careful to not take capabilities away from the state of California that might be useful in fighting forest fires.&#8221;

Blum said that the National Guard Bureau also mitigated any risk by signing compacts between the states &#8212; particularly Oregon and Nevada &#8212; whose Guard units could assist in the firefighting effort.

On Tuesday, six C-130 transports equipped with special firefighting equipment flew to southern California: two each from the Wyoming National Guard and the North Carolina National Guard, and an Air Force Reserve unit from Peterson Air Force Base in Colorado Springs, Colo.

In terms of Defense Department involvement, the situation in California is &#8220;a more severe challenge&#8221; than the worst fires on record in the state to date, McHale said. Those wildfires torched Southern California during the latter half of October 2003, devastating an area larger than Rhode Island and claiming 22 lives.

He said the reason this is more challenging is that this fire &#8220;presents a greater likelihood that a large number of DOD personnel would be actively employed in the firefighting.&#8221;

Already the Department has made a more substantial commitment than it made during the 2003 fires.

Among those military assets the Pentagon already has set aside to respond to the emergency is a regiment-sized task force from the 1st Marine Division, headquartered at Twentynine Palms.

On Wednesday, about 550 Marines were training at Twentynine Palms for possible firefighting duties, but a warning order telling them a deployment was imminent still had not changed to an &#8220;execute&#8221; mission, Camp Pendleton spokesman Marine Lt. Col. Chris Hughes said.

Meanwhile, at least two fires broke out on Camp Pendleton overnight, where the base&#8217;s 60,000 Marine, Navy, and DOD residents and families were packed and on stand-by to evacuate.

Some DOD assets dedicated so far:

12 firefighting teams and equipment are involved, with about 33 active-duty and 79 defense civilian personnel.

About 550 Marines from the 1st Marine Division at Twentynine Palms are awaiting orders to form a task force to help fight fires in San Diego County.

One Marine CH-46 and three CH-53 helicopters are on stand by at Marine Corps Air Station Miramar.

One additional helicopter is on standby at Camp Pendleton.

Six fire trucks each deployed by the Marine Corps and Navy to support local firefighting efforts.

Naval Base San Diego gymnasium, with room for about 500 people.

At port in San Diego, a Navy Aegis cruiser, a guided-missile destroyer and two fast frigates are delaying planned floats and remaining in port to support evacuation and movement of family members if necessary.

Navy commanders have issued orders that all sailors ashore in barracks will move aboard ships to provide room for evacuees.