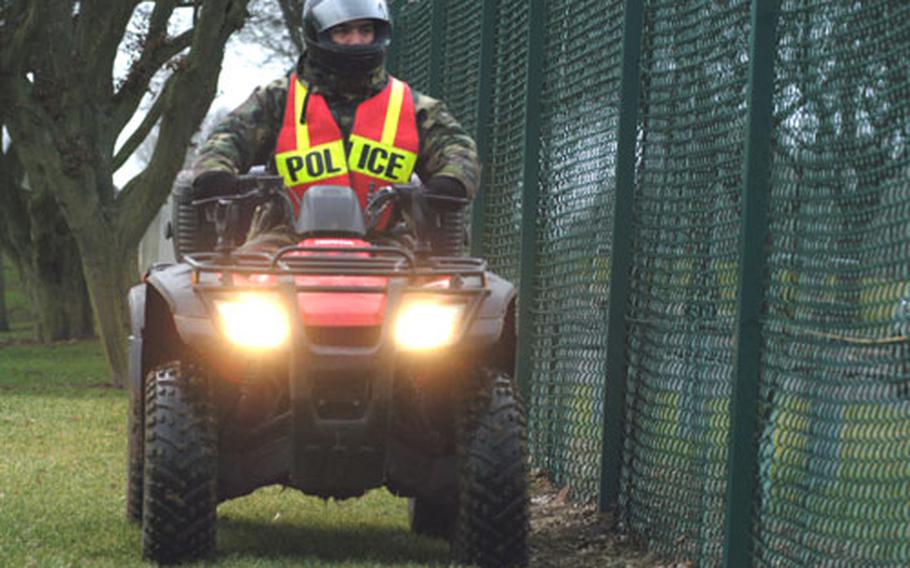 Airman 1st Class Anthony Harmon, an installation patrolman for the 422nd Security Forces Squadron, drives an all-terrain vehicle along the perimeter fence of RAF Croughton. Patrolmen use ATVs to check for suspicious activity in areas that patrol cars can’t get to. (Sean Kimmons / S&S)

Airman 1st Class Anthony Harmon, an installation patrolman for the 422nd Security Forces Squadron, drives an all-terrain vehicle along the perimeter fence of RAF Croughton. Patrolmen use ATVs to check for suspicious activity in areas that patrol cars can’t get to. (Sean Kimmons / S&S) Three people cut a hole in the fence around Patch Barracks on Aug. 9 and entered the base, an incident Marine Gen. James L. Jones, above, commander of the U.S. European Command, describes as a “wake-up call.” (U.S. Marine Corps)

On the morning of Oct. 12, 2000, a small boat pulled alongside the guided-missile destroyer USS Cole, which was moored for refueling in the port of Aden, Yemen.

The results were two deadly strikes against U.S. forces.

&#8220;These are some of the major incidents that have happened, where our defense had been penetrated and we were left asking ourselves, &#8216;How could this happen?&#8217;&#8221; said Marine Gen. James L. Jones, commander of the U.S. European Command.

Then, last Aug. 9, three people in broad daylight cut a hole in the chain-link fence at Patch Barracks in Stuttgart, home of EUCOM&#8217;s headquarters and other high-value targets for enemies of the U.S. They entered the base unchallenged.

Jones, in a recent interview with Stars and Stripes, said the stark &#8220;wake-up call&#8221; prompted the formation of the Antiterrorism Action Cell, or ATAC. It&#8217;s at the European Plans and Operations Center at Patch Barracks.

ATAC reports daily to Jones on &#8220;how this could happen,&#8221; potentially, at military installations throughout his area of responsibility and what&#8217;s being done about it.

&#8220;I feel very strongly that I am responsible for the security of our installations, and that includes our families and the like,&#8221; Jones said. &#8220;Even more so, now that a lot of our soldiers are downrange supporting [the wars in Iraq and Afghanistan].&#8221;

The 15-member ATAC group collects and analyzes tips and data on potential enemies. It scrutinizes the vulnerabilities at U.S. bases. The ATAC briefing carries the same importance as operations, intelligence and other matters. Jones said.

It&#8217;s impossible to protect everyone, Jones acknowledged. Each installation and port has its own characteristics and soft spots. Every inch of fence line cannot be watched all the time. Every building cannot be moved out of harm&#8217;s way should an enemy decide to deliver a car bomb or a few well-aimed missiles.

But the airmen who guard Ramstein Air Base can now share information with soldiers who guard the Baumholder garrison a few miles up the road, or with sailors who patrol the port in Naples, Italy.

Everything being done in Europe to protect the force is now being brought together by the ATAC, which relays the information up to Jones, who sends orders down.

&#8220;It is something I look for now every single day, instead of just being content that the components are doing their own separate force protections,&#8221; Jones said. &#8220;I don&#8217;t mean to imply that it was broken, but there was a fusing aspect of it I thought we could do better.

Those who live, work or go to school on Patch Barracks were lucky that the Aug. 9 infiltrators were merely peaceful protesters. One was a 70-year-old woman. They were not carrying bombs or firearms, just a protest banner. After walking through the base unchallenged, the three turned themselves in at the main security gate.

But the Air Force personnel in Khobar and sailors in Aden were not so fortunate.

In Khobar, the tanker truck was laden with approximately 5,000 pounds of explosive. It was parked about 100 feet away from the eight-story dormitory, and after the attackers sped away in a getaway car, the truck blew up. Nineteen U.S. personnel were killed and hundreds were wounded.

In Aden, 17 sailors died aboard the USS Cole, a nearly $1 billion warship, after two men in a small boat pulled up to the Cole&#8217;s hull and detonated an estimated quarter-ton of C4 explosive.

According to the ATAC chief, Air Force Col. Keith Anderson, the cell strives for faster, flexible planning and response to potential danger before it happens. All the service branches and various expertise are represented on the team.

&#8220;We recognize this is a work in progress,&#8221; Anderson said in an e-mailed response to Stars and Stripes. &#8220;We will continue to refine our processes, but the ATAC has already reinforced force protection and antiterrorism emphasis throughout the theater.

Anderson declined to give specific examples of security upgrades at EUCOM installations based on the cell&#8217;s activities. He said improvements have been made on how the military gathers, evaluates and shares threat information within Europe.

Since Jones believes that force protection within EUCOM is his responsibility, his daily discourse with the ATAC brings pressure to bear on those responsible for keeping people safe.

It also makes him better informed, which is necessary, Jones said, because the buck stops with him.