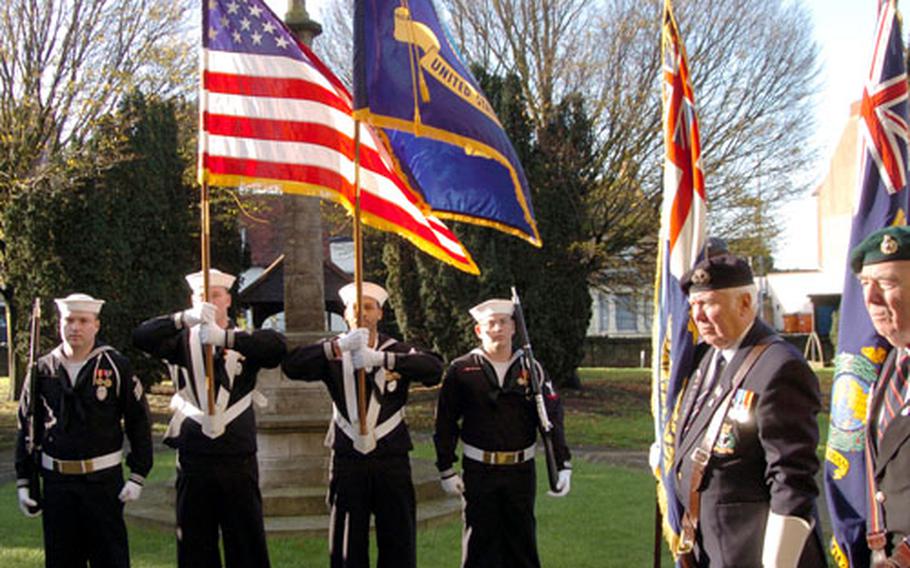 RAF MILDENHALL &#8211; U.S. and British sailors were thousands of miles apart the day Pearl Harbor was attacked by the Japanese 65 years ago, but each year members of the two powerful navies get together to commemorate the infamous day.

On Sunday, about 20 sailors from Commander, U.S. Naval Activities United Kingdom and their family members gathered in the town of Southend-on-Sea at the mouth of the Thames for a special memorial ceremony that marks the end of an era for the England-based naval unit.

With the command continuing to downsize in the London area, Sunday&#8217;s appearance by CNAUK was likely its last in the more than 20-year history of the event, though remaining American NATO sailors may be asked to attend in the future, said Senior Chief Petty Officer Gregory Lyon, who attended the ceremony.

Unit commander Capt. Dave Dittmer, who read a proclamation at the memorial, said he personally would try to return next year.

Sunday&#8217;s event included a service at St. Mary&#8217;s Church and a special presentation of a U.S. flag recently flown over the USS Arizona at its memorial site in Hawaii and given to members of the Royal Naval Association by Dittmer.

The tradition of a joint Pearl Harbor remembrance ceremony was started in the 1980s when a member of the RNA donated a plaque to the Arizona memorial and received a flag from the staff in return, Lyon said.

The Sunday event included hymns and prayers and the singing of both national anthems, followed by a tour of Southend-on-Sea led by the city&#8217;s mayor and afternoon tea at his official residence.

&#8220;We shared a lot of memories over a coffee and a pint,&#8221; Dittmer said of the atmosphere at the post-service reception.

Lyons said he enjoyed the chance to talk to World War II veterans who saw action in the Royal Navy and said the event demonstrates, &#8220;very, very strong friendships there &#8212; very strong.&#8221;