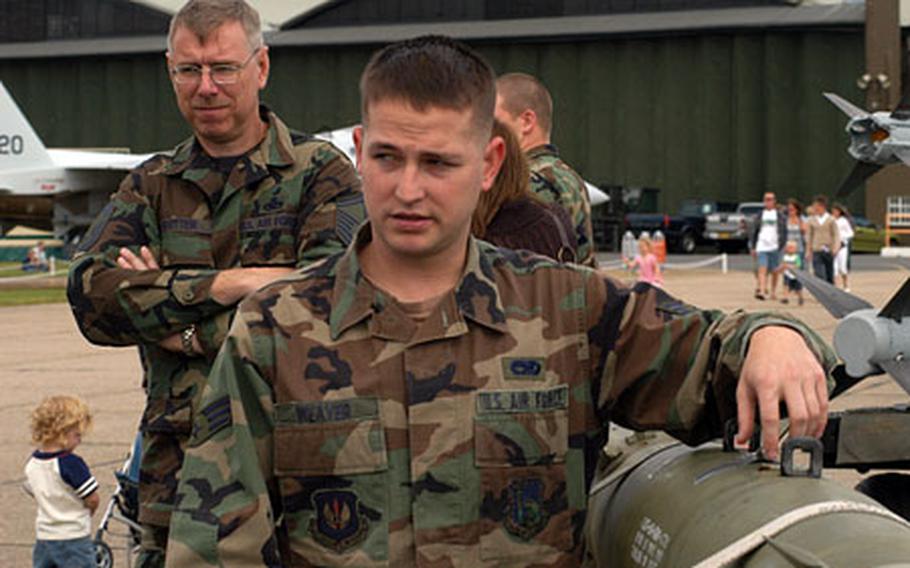 Senior Airman Daniel Weaver, 23, of Columbus, Ga., details the workings of a guided bomb unit from the 48th Munitions Squadron at RAF Lakenheath. Weaver was one of scores of American airmen on hand at the Duxford Imperial War Museum last Saturday in Cambridgeshire. (Bryan Mitchell / S&S) 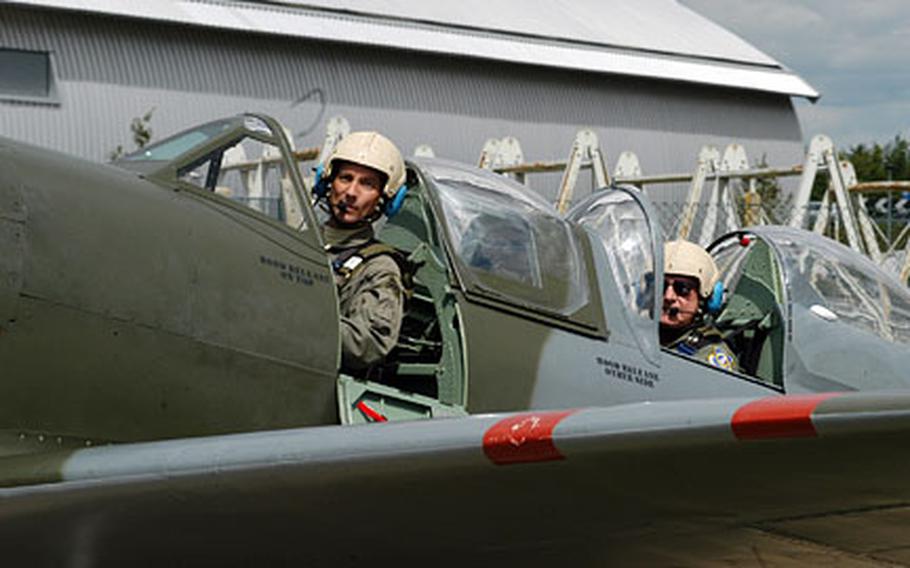 Former Royal Air Force pilot David Ratcliffe steers a 1946 Spitfire onto the runway as Maj. Gen. Paul Fletcher sits in the backseat of the World War II-era aircraft. Fletcher, who is the deputy commander of 3rd Air Force and the highest ranking Air Force officer in the United Kingdom, flew the Spitfire at American Air Day. (Bryan Mitchell / S&S)

DUXFORD &#8212; Britons eager for a closer view of American airpower arrived by the thousands on Saturday at one of the country&#8217;s premier air museums, host of American Air Day celebrating the 60th birthday of the U.S. Air Force.

Scores of airmen clad in camouflage from nearby RAFs Mildenhall and Lakenheath were on hand at the Imperial War Museum Duxford to welcome guests from across England who came to watch vintage aircraft take to the skies alongside some of America&#8217;s most sophisticated aircraft.

&#8220;It&#8217;s always good to come out and interact with the British, who are just crazy about aviation and aircraft,&#8221; said 48th Fighter Wing Capt. Kristin Wehle, who serves as a weapons system officer on an F-15 Eagle.

One of Wehle&#8217;s comrades quip- ped that some civilian Britons often challenge airmen on their aviation knowledge.

And hundreds of other airmen and their families, clad in shorts and T-shirts thanks to the first sunny day in weeks, moseyed along the grounds&#8217; main thoroughfare, watching a day full of flyovers and learning a bit along the way.

And that past came to life with flyovers from a World War II-era Spitfire, co-piloted by 3rd Air Force deputy commander Maj. Gen. Paul Fletcher, as well as the last airworthy F-86 Saber, which flew combat missions during the Korean War.

Ten-year-old Daniel Scholes Jr., attended the air day with his parents, who live in a nearby village. He said seeing the Spitfire up close was his personal highlight.