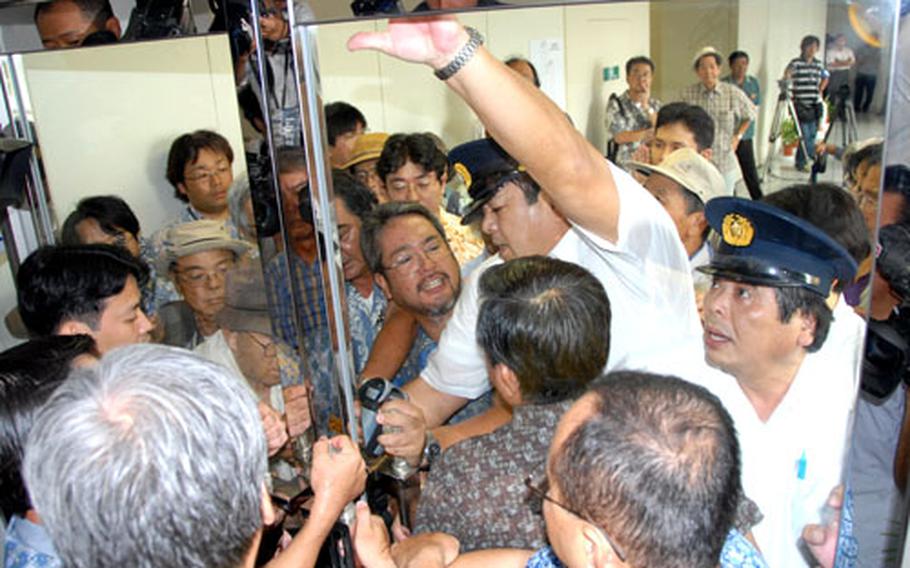 Two security guards block the door from one side while prefectural government employees help from the other side to keep about 30 protesters from barging into a Thursday meeting between Japanese defense official Iwao Kitahara and Okinawa Gov. Keiichi Inamine. (Megan McCloskey / S&S)

Two security guards block the door from one side while prefectural government employees help from the other side to keep about 30 protesters from barging into a Thursday meeting between Japanese defense official Iwao Kitahara and Okinawa Gov. Keiichi Inamine. (Megan McCloskey / S&S) 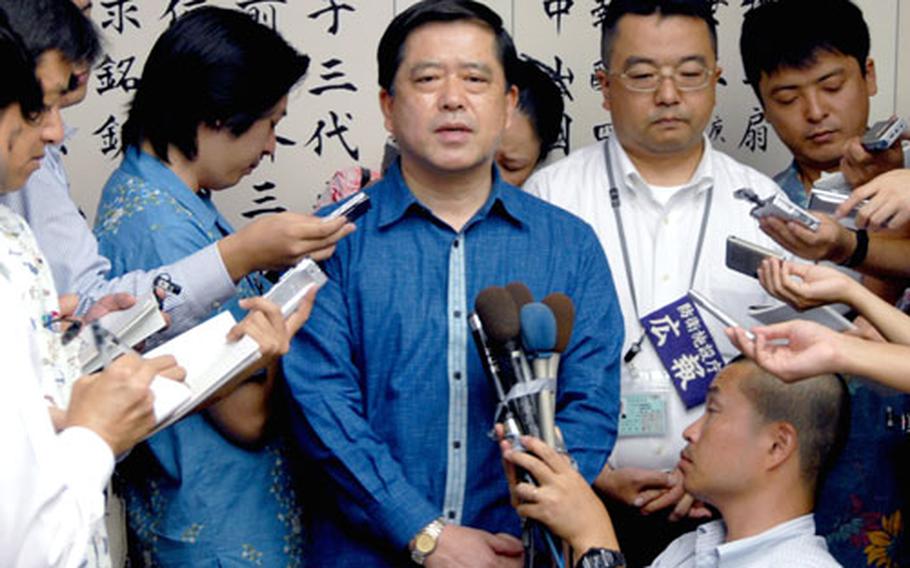 Japanese defense official Iwao Kitahara announces Thursday amid a throng of reporters that missiles will be deployed to Kadena Air Base. (Megan McCloskey / S&S)

Japanese defense official Iwao Kitahara went to Okinawa Gov. Keiichi Inamine&#8217;s office to announce the move, which had been expected. But after making the announcement, the Defense Facilities Administration Agency director &#8212; caught between Japanese reporters with cameras inside the office and angry, loudspeaker-wielding peace activists outside &#8212; struggled to exit the building.

The announcement ends weeks of speculation about which Japanese base would house the system. The 24 Patriot Advanced Capability-3 missiles, which local residents and leaders strongly oppose, will be relocated from Fort Bliss, Texas, said Master Sgt. Terence Peck, USFJ spokesman.

Kitahara said missile personnel will begin arriving in August and the equipment in September.

About 600 U.S. Army personnel are expected to relocate to Kadena to handle the PAC-3, Peck said. The 10th Area Support Group at Torii Station will handle daily administration; the 94th Army Air and Missile Defense Command on Fort Shafter, Hawaii, will be in command.

The ballistic missile defense system deployment is a part of the broad U.S. troop realignment agreement that both countries signed May 1. Kadena was chosen because of Okinawa&#8217;s strategic location and the base&#8217;s operational capacity, Peck said.

Kitahara was on Okinawa on Thursday for a number of closed-door meetings to explain the decision to mayors and political leaders of the Kadena communities, including Kadena Town, Okinawa City, Chatan and Yomitan.

He was greeted with protest slogans from activists at the governor&#8217;s office, his first stop. They chanted into a loudspeaker, &#8220;Kitahara, go home!&#8221; At one point, they tried to barge into the conference room, forcing security guards and prefectural government officials to block the door.

Kitahara&#8217;s dominant public message throughout Thursday was that the missile system is good for Japan and reinforces the deterrence power of U.S. forces in Japan.

&#8220;The deployment of PAC-3 is extremely significant to ensure the security of Okinawa and also for the rest of Japan,&#8221; he said.

Kitahara said that the system would have no adverse effects on residents, cattle or agricultural products and that no live-fire training would take place on the island.

Nor will expanding the base be necessary, as its munitions storage area can accommodate the missile system, according to a USFJ statement.

Nevertheless, Kadena Town Mayor Tokujitsu Miyagi said, &#8220;For residents, both psychologically and physically, it is an increase of the burden.&#8221;

At a news conference, Inamine criticized the plan and predicted local communities would oppose it, saying, &#8220;We have been long demanding to reduce the burden shouldered by residents in communities surrounding Kadena Air Base.&#8221;

Miyagi also criticized bringing the missiles to Kadena, saying, &#8220;The system&#8217;s purpose is to protect the air base from an enemy&#8217;s attack. It is not primarily to protect residents.&#8221;