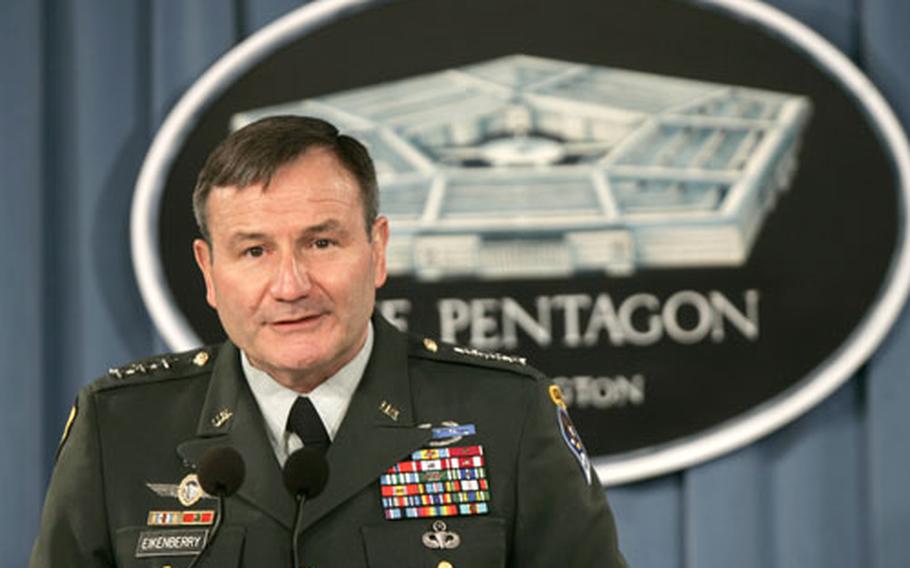 Lt. Gen. Karl Eikenberry, commander of U.S. Forces in Afghanistan, speaks with reporters during a briefing at the Pentagon on Wednesday. (Lawrence Jackson / AP)

WASHINGTON &#8212; The top U.S. commander in Afghanistan on Wednesday said he is confident NATO forces will be able to handle increasing Taliban activity in southern parts of the country when they take over military responsibilities there this summer.

&#8220;They are already on the ground and they are proving themselves,&#8221; said Lt. Gen. Karl Eikenberry, commander of Combined Forces Command-Afghanistan, during a news conference Wednesday. &#8220;I have absolute confidence that all the NATO forces coming in will be very capable forces and &#8230; will prevail in the south and do well.&#8221;

Eikenberry confirmed reports of increased Taliban activity in southern Afghanistan, but also blamed tribal fighting and other criminal activity in the region for an upsurge in violence there. Attacks in the region are up so far this year as compared to 2005.

NATO forces are scheduled to take over military command of several southern provinces by the end of July, though Eikenberry emphasized that U.S. forces will still provide much of the equipment and manpower to operations there.

But he dismissed concerns that the transition will leave the region vulnerable, and possibly provide an opportunity for Taliban or terrorist organizations to regroup.

&#8220;We will maintain, even as the NATO mission proceeds, this capability to strike against high value targets or the al-Qaida structure,&#8221; he said. &#8220;There is no distinction between the U.S. and NATO. We will have combat forces in southern Afghanistan under NATO. And all forces are committed to fight against the enemies of Afghanistan.&#8221;

Canadian forces currently in Kandahar, Australian troops in Uruzgan province and British fighters in Helmand province will make up much of the new security force for that region, along with the U.S. forces already in the south, he said.

Eikenberry would not say whether the increased NATO role could lead to a drawdown in U.S. troop levels in coming months, only that the United States will continue to provide the most troops of any country involved in Afghanistan.