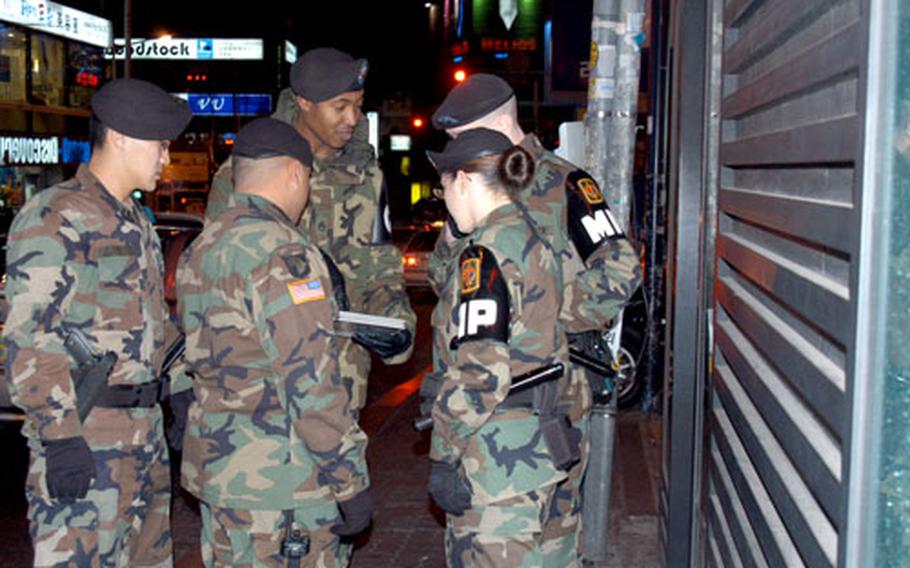 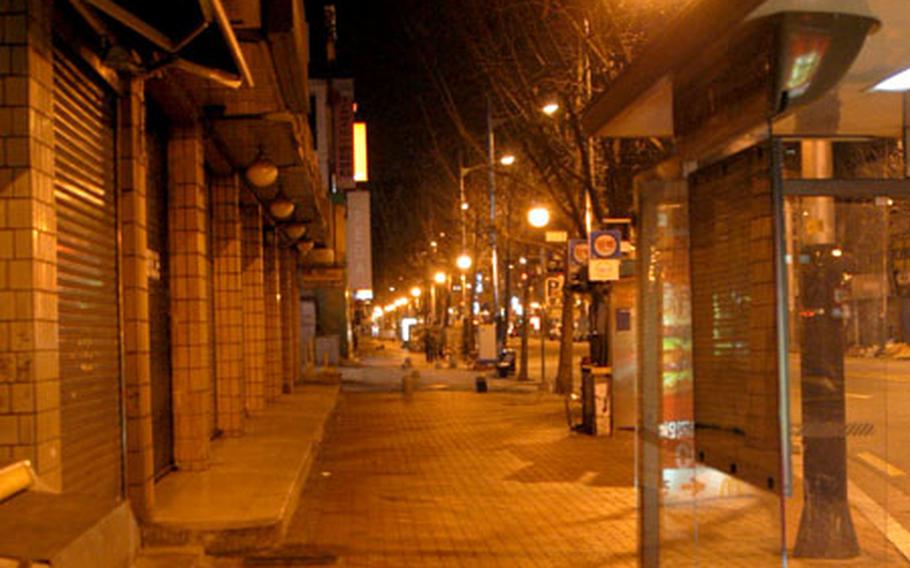 The main drag in Itaewon is deserted at 5 a.m. in the final minutes before the nightly curfew is lifted. Some civilian and contract workers complain the policy in unnecessary and intrusive. (Teri Weaver / S&S)

SEOUL &#8212; Thomas Ungleich is facing three weeks of unpaid leave that he neither wants nor, he believes, deserves.

Ungleich, 58, a Defense Department worker with the 7th Air Force at Osan Air Base, is in trouble at work for something he did out of the office.

He stayed out too late.

In early December, Ungleich broke curfew, a U.S. Forces Korea rule requiring all U.S. military members, government workers and private contractors &#8212; and their families &#8212; to be at home, at work or at an on-base activity between midnight and 5 a.m. daily.

Questions about the curfew abound among the 5,000 civilian workers here like Ungleich. (The curfew also applies to Stars and Stripes employees in South Korea.)

Defense Department spokesman Navy Lt. Cmdr. Greg Hicks said he did not know whether curfew policies that put civilian workers under the same restrictions as military members were in place in others part of the world.

USFK commander Gen. Leon J. LaPorte amended the ongoing curfew for servicemembers in September in response to a State Department warning that cautioned all U.S. citizens in Korea about potential protests and violence against Americans, USFK officials have said. On Friday, USFK and Army judge advocate officials added that the State Department warning was only one of several force protection and readiness reasons to change the curfew hours in September to 9 p.m. to 5 a.m.; LaPorte lessened that restriction a few weeks later to the current timeframe of midnight to 5 a.m.

What is unique, say workers with decades of both military and government experience, is LaPorte&#39;s decision to broaden the curfew restrictions to include contract workers, people whose paychecks come from private companies but whose workloads depend on the military.

Yet USFK officials couldn&#8217;t say this week whether the September announcement was the first time contractors were included in the curfew policy. &#8220;I can&#8217;t say for sure,&#8221; said Col. Daniel F. McCallum, the military&#8217;s top judge advocate in Korea, during an interview Friday morning. He added that contractors possibly were included in previous curfew policies but USFK chose not to enforce the restriction.

The curfew certainly feels new for much of the civilian workforce here, contract workers say. And in the past five months, those workers have grown increasingly angry and aware that directions from a four-star general can affect their social lives and job security.

Military officials say the policy is special because USFK&#8217;s mission is special.

The U.S. military here is charged with enforcing an armistice, a 51-year-old peace agreement between North and South Korea. That, combined with the constant concern of terror threats since Sept. 11, 2001, compels the military to take extra precautions to ensure &#8220;force protection,&#8221; a military term dictating that troops remain both safe and ready to fight, according to USFK.

That explanation carries little weight with workers who have worked here for years without a curfew &#8212; or under one neither advertised nor enforced &#8212; and who now feel frustrated by a policy that for many began in the midst of their time in Korea. Those frustrations escalate, workers say, when they can&#8217;t seem to get clear answers to how the policy works and what might happen if they get caught.

Stars and Stripes interviews with military officials and civilian workers have shown there is considerable confusion and resentment over the policy, for these reasons:

Enforcement is scattered and uneven. Military police have no jurisdiction over civilian or private-contract workers while off-base, say military officials including McRee with the Provost Marshal&#8217;s office. Instead, U.S. officers patrol streets with Korean National Police officers who can stop and question foreigners. Not every off-base area allows these patrols, said Col. Timothy McNulty, Area II commander who oversees installations in the Seoul area. Although military officials are working to expand the patrols, some parts of Seoul and Pyongtaek are watched closely while many other areas go unchecked.No specific guidelines for sanctions for contract workers exist under the current policy, USFK officials say. When it comes to curfew violations, some offenders may get verbal warnings, said Col. John Arrigo, a deputy judge advocate with the military in Korea. But others, such as Ungleich, have been hit with unpaid leave or threat of job loss. Some, including Osan contractor James Johnson, say they didn&#8217;t know military officials had taken their names for breaking curfew until they returned to work and heard from their bosses.Aspects of the policy remain unclear. USFK officials say each civilian or contract worker has the opportunity to request exceptions to the policy for social or family needs. More than a dozen workers interviewed for this story in the past two months indicated they didn&#8217;t know that. Instead, they pointed to a small stack of orders that have come out in past weeks that describe the curfew&#8217;s hours and approved after-hour locations, such as home, work or on-base activities. Also, some civilian workers have questioned whether the curfew applies to their Korean-citizen spouses. It does not, McCallum told Stripes Friday &#8212; but nowhere do those written orders state that such Korean citizens are exempt.&#8220;We&#8217;re forced to live off-base,&#8221; Ungleich said. &#8220;It&#8217;s not like the G.I. who lives on base. That&#8217;s a military readiness issue. I don&#8217;t think they&#8217;ve got a legal basis&#8221; for the civilian curfew.

USFK officials say they do.

The Pentagon gives military leaders, including LaPorte, the authority to create rules for servicemembers and civilian workers to ensure their safety, according to 1996 and 2000 Department of Defense directives.

Additionally, contract and civilian workers are in the country as part of the status of forces agreement between the United States and Korea. The SOFA stamp in each worker&#8217;s passport is a privilege, military officials say, that can come with added hardships.

It&#8217;s not unusual for the military to require its own members to be home at a certain time, and servicemembers in Korea have been under various curfews since long before the Sept. 11 terror attacks, according to USFK&#8217;s public affairs office.

On Sept. 24 last year, LaPorte amended the curfew&#8217;s time to 9 p.m. to 5 a.m. in response to an advisory the previous day from the State Department, citing an increased threat against Americans abroad, his press office has said. Civilian and contract workers interviewed by Stripes say that is the first time they can recall being told what time they needed to be home.

That Sept. 23 notice, &#8220;Heightened Risk of Demonstrations and Terrorist Action Against Americans,&#8221; warned that targets might include civilians and &#8220;facilities where U.S. citizens and other foreigners congregate ... including residential areas, clubs, restaurants, places of worship, schools.&#8221;

Despite the September warning notice, some of the workers note, no curfews currently are in place for workers at the U.S. Embassy in Seoul. Embassy officials and workers are not covered by SOFA &#8212; but like other Americans in South Korea, are among the intended audience for State Department travel warnings. None have been issued for Americans visiting South Korea, the embassy&#8217;s press office confirmed in January.

Civilian workers interviewed in the past few weeks said they believe the policy comes from the military&#8217;s efforts to discourage soldiers and other Americans from hiring prostitutes, a practice that can support human trafficking.

USFK officials including McCallum, the judge advocate, have said the effort to curb prostitution is separate from the curfew policy.

Further, McCallum cautioned against trying to select one factor &#8212; even a State Department warning &#8212; as the sole reason for the curfew policy. He said the justification for the curfew comes with a combination of intelligence and readiness issues that LaPorte weighs each day.

No one interviewed disagrees with LaPorte&#8217;s &#8220;zero tolerance&#8221; stance about prostitution and human trafficking. But the curfew stretches the argument of &#8220;force protection&#8221; beyond reason, the workers say.

The dissatisfaction voiced by the workers is compounded by confusion over how the curfew works and how it could affect them. They&#8217;ve been searching for answers &#8212; through e-mails to commanders, letters to the editor and to Congress, conversations with bosses and a newly created Web site about the curfew. So far, they say, officials have offered little clarification.

Jay Diem, another contractor at Yongsan, spent much of the fall and winter risking curfew violations when he coached adult-league ice hockey at night in Seoul.

Chaffin, the analyst at Osan, normally gets off work at 11:15 p.m. By the time he reaches home, he can&#8217;t go to the local Korean market for groceries, he said. Others complain about missed late-night off-base church services or family gatherings at Korean households that are cut short.

Not everyone, however, is complaining. At least one U.S. worker in South Korea recalls one other overseas base where military officials asked civilian workers to be home early.

Dr. Kathleen Barbee, the principal at Seoul American High School at Yongsan Garrison, remembers being under curfew while working in Germany during the first Gulf War. She encourages her staff to keep to the curfew, she said during a Dec. 15 phone interview. &#8220;We follow the guidelines as best we can,&#8221; she said.

Sometimes, civilians say, that means making the best guess possible about what&#8217;s allowed. For instance, Charlie Smith, 50, another Yongsan contractor, wonders whether his Korean wife can leave the house after midnight.

McCallum said Friday that USFK is not trying to tell Korean citizens when to be home. If a person is in South Korea for reasons outside of USFK&#8217;s mission &#8212; a tourist, a teacher, a South Korean citizen &#8212; then, he said, the curfew does not apply.

McCallum added that the policy is reviewed regularly, and leaders actually considered rescinding it for the Jan. 1 New Year&#8217;s holiday. In the end, 8th Army commander Lt. Gen. Charles Campbell issued a general order Dec. 29 approving travel after midnight for people attending an &#8220;on-installation activity&#8221; or an &#8220;installation-sponsored&#8221; event.

The workers say they are waiting for someone brave enough to get caught, hire a lawyer and test the command&#8217;s authority. It&#8217;s an expensive and risky endeavor, they say, and they can understand the reluctance to try.

There is some relief in the system, a few have found. Diem, the contractor who plays hockey, was awarded a reprieve a few weeks ago for his late-night sports schedule. But he&#8217;s still mad that he had to ask.

&#8220;I am glad that Gen. Campbell saw the logic in my request and signed it,&#8221; Diem wrote in an e-mail to Stripes on Friday. But he&#8217;s angry, he said, over being barred from impromptu travels throughout the peninsula. &#8220;Just two nights ago, I had to tell my in-laws that I, along with my Korean wife, needed to leave their house because of the curfew.&#8221; That happened during Lunar New Year, one of the most important holidays for Korean families.

Ungleich, the government worker facing the three-week suspension, is trying to appeal his punishment. He fully admits being out late on Dec. 5 and admits that two different patrol groups questioned him after midnight that night.

Yet he questions the process. &#8220;I&#8217;ve got 30 years total government service and I&#8217;ve never had any disciplinary action,&#8221; Ungleich said. As of this week, he still awaited a response to an appeal to his suspension.