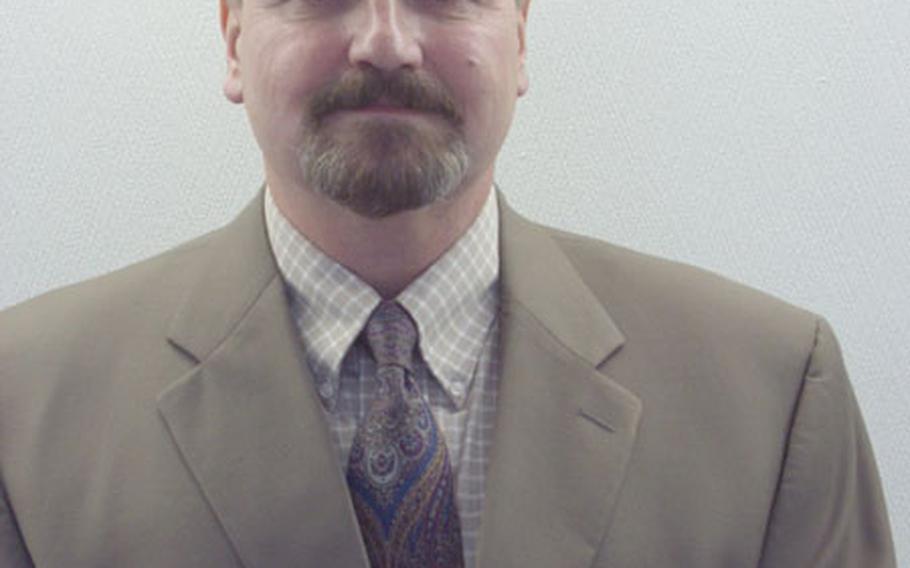 Don Reed was injured Nov. 25 by shrapnel from a mortar round fired at a U.S. Army camp in Iraq. On Friday, the Defense Logistics Agency-Europe employee received the Purple Heart. (Kevin Dougherty / S&S)

On Friday, Don Reed received the Purple Heart for injuries he suffered in November while working in Iraq for the Defense Logistics Agency-Europe. Officials believe Reed is the first DLA civilian to receive the award.

It is so rare that the Defense Department on Friday couldn&#8217;t say how exceptional it is, though officials were researching the issue.

&#8220;Rare is the best way to describe it,&#8221; said Navy Vice Adm. Keith W. Lippert, director of the Defense Logistics Agency, based at Fort Belvoir, Va.

Lippert was on hand Friday to formally present Reed with the Purple Heart. Reed&#8217;s wife, Janice, and scores of colleagues attended the morning ceremony, held at DLA-Europe headquarters in Wiesbaden.

The logistics agency supplies Defense Department personnel with just about any item they need, from food and fuel to building material and vehicle parts. In fiscal 2003, Lippert said DLA managed more than $25 billion in supplies and services, awarding, on average, 8,200 contracts a day.

At the ceremony, Lippert seemed as excited as Reed. The admiral said in his 35 years of service he never had the &#8220;honor and privilege&#8221; of presenting the Purple Heart to somebody.

Certainly, Reed doesn&#8217;t fit the profile of someone on the receiving end of an award that dates to George Washington and the Continental Army.

Reed, 47, served in the Army for seven years, the first four on active duty. Assigned to the U.S. Army Band, Reed fiddled around more with musical instruments than he did with an M-16 rifle.

In the last few years, however, he has made up for lost time. After serving a six-month stint in Bosnia and Herzegovina, Reed deployed to Iraq in February as the customer service representative for the 4th Infantry Division. He left Iraq in July, but returned several weeks later in the same capacity for the 1st Armored Division.

While in his GP-medium tent in the early evening of Nov. 25, a mortar round exploded over his tent, one of eight that Iraqi insurgents fired at the camp. Reed was struck six times by flying shrapnel. The most serious injury was to his left calf, where a pea-size piece cut through his leg. He also was hit in the right leg, chest and head, the latter being a glancing blow.