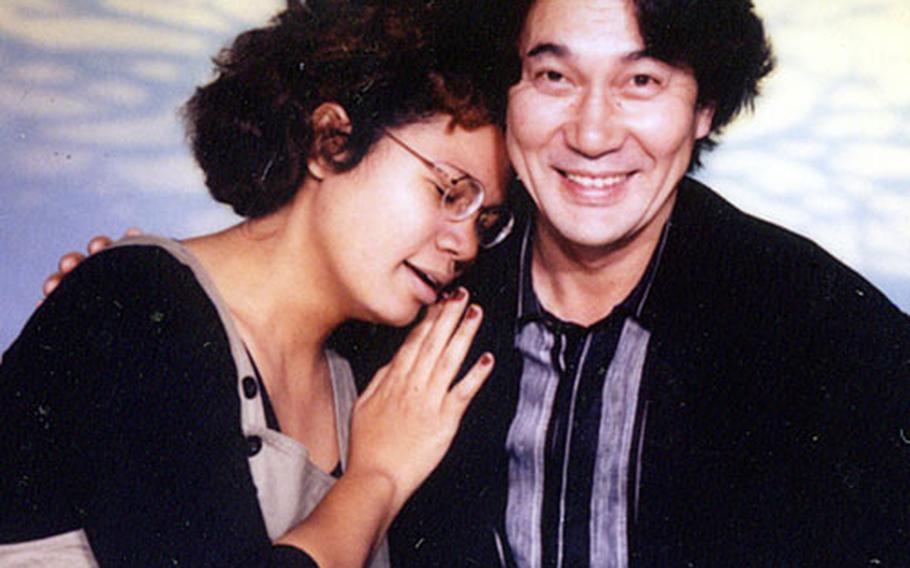 Cydonie Fukami, a U.S. civilian at Atsugi, will be starring in a Japanese TV show. Here, she&#39;s seen with her favorite Japanese actor, Koji Yakusho. (Courtesy of Cydonie Fukami)

ATSUGI NAVAL AIR FACILITY, Japan &#8212; From &#8220;The Other Sister&#8221; to a Gap ad campaign to an upcoming Japanese soap opera, one former sailor is making a big name for herself.

Cydonie Fukami, a relocation program assistant at Atsugi&#8217;s Fleet and Family Support Center, has parlayed what started as a three-year Navy tour as a radio operator in Misawa into a burgeoning career as a gaijin actor in Japan.

And though she had extensive modeling and acting experience in the United States, her career in Japan got started as an afterthought.

&#8220;I got all dressed up, too: put on makeup and did my hair in a big old Afro. I guess I was hoping to get discovered a little bit, too,&#8221; she laughs, recounting how the trip yielded an agent for her, but nothing yet for the kids.

Three weeks later, Fukami got her big break &#8212; an English-speaking role as a Hawaiian nurse on an upcoming soap opera starring Yoshino Kimura &#8212; one of Japan&#8217;s most popular young actresses.

Fukami first came to Japan in 1989, working at a Navy intelligence command in Misawa. At the end of her three-year tour, the Fresno, Calif., native returned home and studied international relations at San Francisco State University.

During that time, she also acted in various stage dramas and attended the John Casablanca Modeling School in San Francisco. Her modeling career took off &#8211; she was in ad campaigns for the Gap, Old Navy and other clothing chains.

Then, she started a graduate program in Asian studies at California State University, Long Beach. During research for her thesis, she moved back to Japan.

She found a place in Nara, where by her own account, she became &#8220;lonely, bored and isolated.&#8221; Then, one day on a walk in Osaka, she saw a Japanese man across a bridge. The two would marry and now have two daughters: Lunar, 3, and Venus, 18 months.

In her studies and free time, Fukami has become fluent in Japanese. She&#8217;s been on game shows, done voiceover work for commercials and worked on a &#8220;secret&#8221; cell-phone project as, essentially, both the Japanese and English voices of a next-generation phone.

A personal highlight of her time in Japan was meeting Koji Yakusho, star of the film &#8220;Shall We Dance.&#8221;

Fukami waited four hours at a book signing to meet him, gave him a hug and had her picture taken.

At the Atsugi Fleet and Family Support Center, Fukami is known as an outgoing, hard-working colleague.

&#8220;One of the different things about her is that she has lived in so many parts of Japan,&#8221; said co-worker Yuji Ogawa. &#8220;She speaks with many different dialects and uses local vocabulary from many regions.&#8221;

Another co-worker said that Fukami&#8217;s success &#8212; previous acting experience aside &#8212; shows that the modeling fairs on bases get results.

&#8220;It&#8217;s sometimes a misconception that the modeling fairs are all about the kids,&#8221; said Debra Foster, of the Fleet and Family Support Center, which coordinates the events.