1st Lt. Jenalyne Balaoro, a nurse with the Philippine Navy, dispenses drugs for the children. As the last and the largest Medical Civic Action Program project the Armed Forces of the Philippines and Civil Affairs Detachment of the 426th Civil Affairs Batallion are providing medical and dental care to more than 2,000 people in Manila. (Jim Schulz / S&S)

1st Lt. Jenalyne Balaoro, a nurse with the Philippine Navy, dispenses drugs for the children. As the last and the largest Medical Civic Action Program project the Armed Forces of the Philippines and Civil Affairs Detachment of the 426th Civil Affairs Batallion are providing medical and dental care to more than 2,000 people in Manila. (Jim Schulz / S&S) 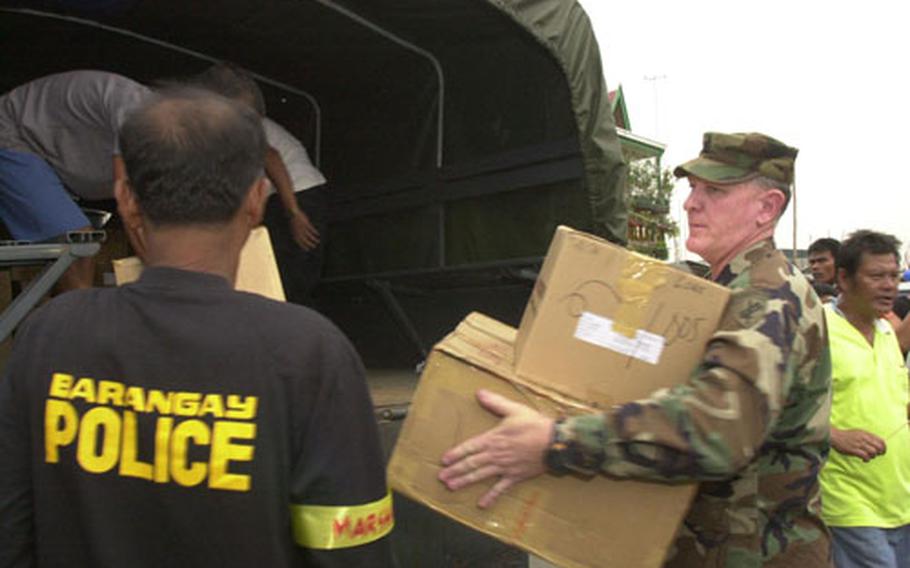 A Philippine girl waits in a crowd for medicine during a joint civil action between the Armed Forces of the Philippines and the Joint U.S. Military Assistance Group. The last and the largest of the MEDCAPs provided medical care to people in Manila. (Jim Schulz / S&S) 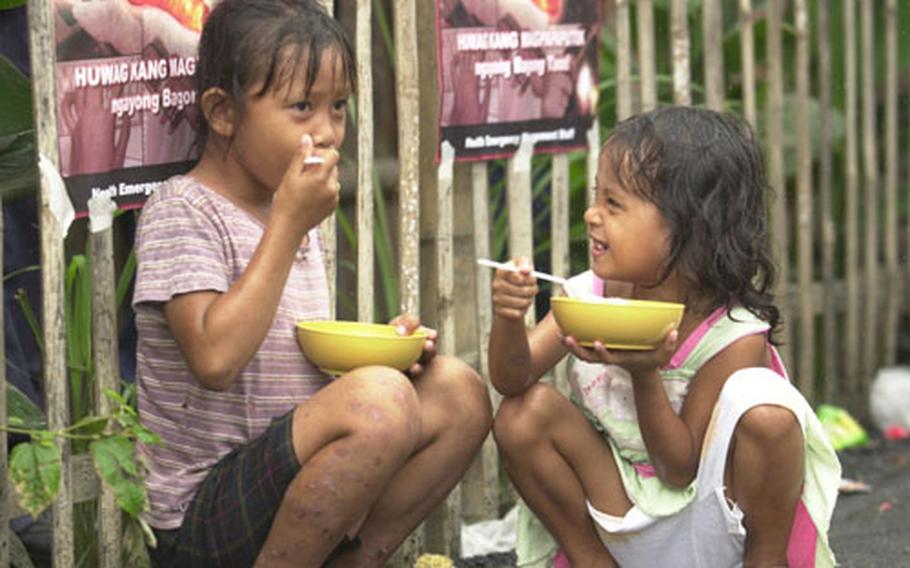 A couple of Philippine children get a bowl of food to eat during a medical civic action program in Manila. The Armed Forces of the Philippines and the Joint U.S. Military Assistance Group joined together in the last and largest MEDCAP Saturday. (Jim Schulz / S&S)

BARANGAY BASECO, Philippines &#8212; For their last mission in the Philippines, four U.S. Civil Affairs soldiers joined Philippine military officials Saturday in their largest and last Medical Civic Action Program in a poor neighborhood on the outskirts of Manila.

Together, they treated 2,000 children and adults and handed out tons of medicines.

The soldiers, all reservists, leave the country in a few days, ending months of projects and assistance to the Philippines, perhaps the poorest country many have seen.

Barangay Baseco climbs precariously from the docks, a mass of tin roofs and debris. The roads are unpaved and the alleys congested.

The narrow roads and mass of people keep most drivers out of the secluded community. A fire about a year ago devastated a huge area after firetrucks couldn&#8217;t squeeze through to help. But an estimated 60,000 people call it home. And many of them need medical and dental care.

Children held a parade and performed on a stage nearby during a street festival that accompanied the Medcap. People lined up for hours to see medics. The event was sponsored by the Armed Forces of the Philippines with U.S. Army support.

Children in fancy dresses and others without shoes received vitamins, deworming medicine and antibiotics. The four U.S. soldiers and Philippine medical staff worked under a tent surrounded by cases of antibiotics, vitamins, rubbing alcohol and peroxide.

This is the largest Medcap the group has held. Mahoney has been in the country seven months and participated in Medcaps in some of the poorest and most dangerous places the Army works.

Each community had its own varieties of illnesses and problems. Members of the civil action teams first visited to determine the best medicines to bring.

In Baseco, he said many people have coughs and high blood pressure.

Rosales and Master Sgt. Jeff Gieseke, a senior medic, along with two Philippine navy medics, spent a rainy Saturday, one of their last days in the country, helping the sick and poor.

The soldiers know they do good, but Rosales said it&#8217;s hard to treat people so quickly and to leave behind seriously sick patients.

Serious cases or those that require additional help are referred to local health officials. Rosales escorted a mother carrying a baby with a severe cleft palate to local officials for follow-up and possible surgical reconstruction.

After seeing so many people with difficult cases, the soldiers can get exhausted and a little depressed, Rosales said.

If he could come back to the country, he&#8217;d like to do more health education, teaching communities about hygiene and first aid, he said. The civil affairs soldiers don&#8217;t know if they will come back next year. The future of civil affairs programs in the Philippines is undecided, as places such as Iraq and Afghanistan require so many resources.

This group is from the 426th Civil Affairs Battalion, a foreign internal defense, unconventional warfare unit from Upland, Calif. They have been working in the Philippines under PACOM and the Joint U.S. Military Assistance Group.

In seven months, the current team has built a school, two solar drying structures for crops and administered aid to tens of thousands of people across the Philippines. They&#8217;ve distributed more than $500,000 in donated goods and medicines.