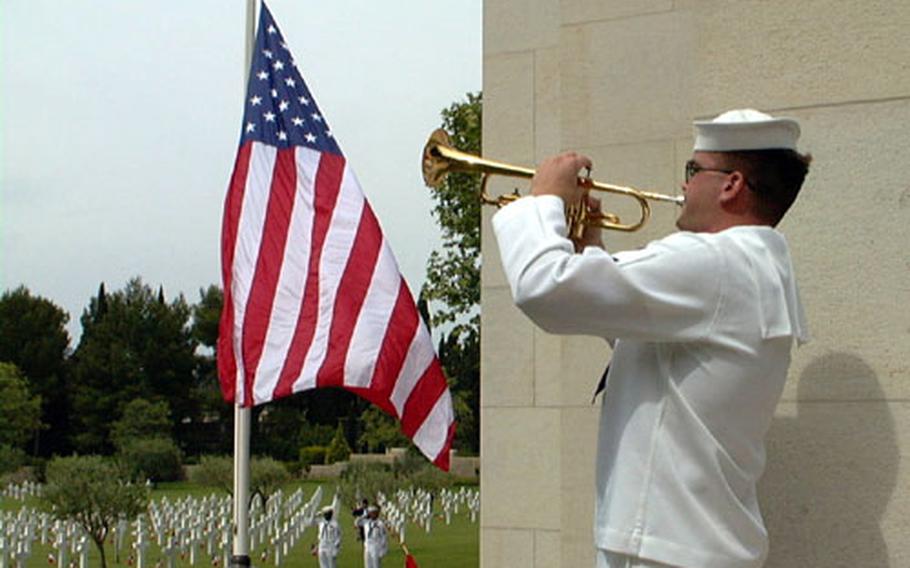 Buy Photo
Petty Officer 3rd Class David Boord, a Navy musician from Naples, Italy, plays taps during a ceremony in May, 2000, at the cemetery in Draguignan, France. More than 500 American and French veterans, family members and distinguished guests attended the memorial for 861 American servicemembers who were buried in the cemetery and the 294 Americans named on Rhone&#39;s Wall of the Missing. (File photo by Anthony Burgos / Stars and Stripes)

In addition to remembering troops who gave the ultimate sacrifice, Memorial Day ceremonies at American cemeteries in Europe this weekend will begin a yearlong commemoration of the final 12 months that World War II was waged on the continent.

Ceremonies in Europe will also be linked to this weekend&#8217;s dedication of the National World War II Memorial in Washington, D.C., and the following week&#8217;s 60th anniversary of D-Day in Normandy, France.

&#8220;What we&#8217;re doing right now is preparing [for D-Day], but we&#8217;re trying to focus on Memorial Day in general, to commemorate the sacrifices of everyone,&#8221; said Margaret Flott, operations officer for the American Battle Monuments Commission-European Region.

The agency manages and maintains American military cemeteries in Europe and the Pacific and will be host to many of the ceremonies listed.

Americans in Europe should attend the events because &#8220;These ceremonies allow them to connect back to the U.S. because they are coming to a place where not only their fellow citizens have fallen, but also to where they can experience an American ceremony overseas,&#8221; Flott said.

For more information on the ceremonies listed, see the American Battle Monuments Commission at www.abmc.gov or the American Overseas Memorial Day Association www.aomda.com.

Following are the sites and their ceremonies: