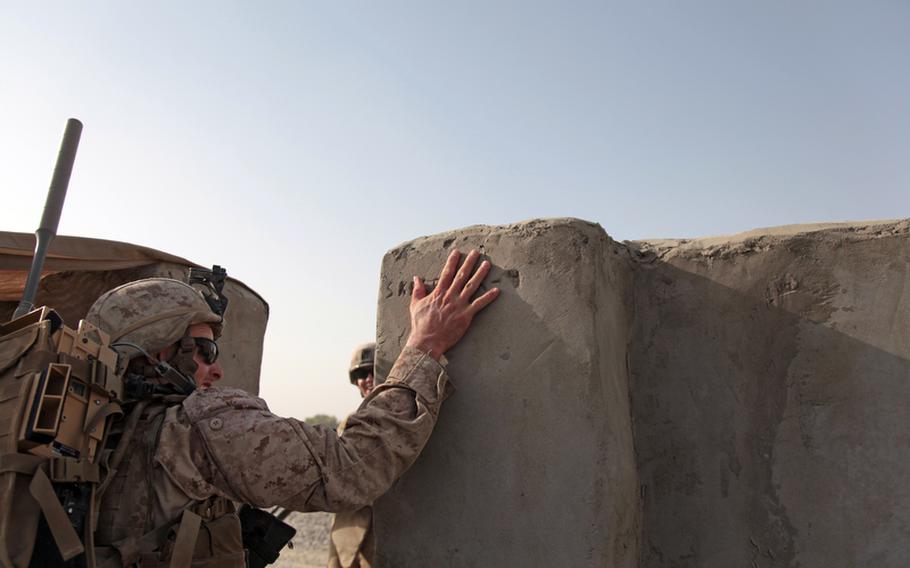 Buy Photo
Lance Cpl. Chris Wombaker, a 21-year-old anti-tank assault man from Greenville, Texas, touches a graffito scratched into the cement of the outer wall of Checkpoint 4 in Garmsir district, Helmand province, as he heads out on a patrol with 4th Platoon, Weapons Company, 1st Battalion, 3rd Marines. U.S. casualties fell in September to a five-month low. (Matt Millham/Stars and Stripes)

Buy Photo
Lance Cpl. Chris Wombaker, a 21-year-old anti-tank assault man from Greenville, Texas, touches a graffito scratched into the cement of the outer wall of Checkpoint 4 in Garmsir district, Helmand province, as he heads out on a patrol with 4th Platoon, Weapons Company, 1st Battalion, 3rd Marines. U.S. casualties fell in September to a five-month low. (Matt Millham/Stars and Stripes) KAISERSLAUTERN, Germany &mdash; U.S. forces in Afghanistan suffered fewer combat fatalities in September than in the previous five months and fewer deaths than they had in September last year, according to an analysis of U.S. Defense Department figures.

In all, 31 U.S. servicemembers died in combat or as a result of injuries suffered in Afghanistan in September &mdash; the lowest total since March. Three deaths were attributed to &ldquo;non-battle injuries,&rdquo; according to the U.S.-led International Security Assistance Force, and are under investigation.

In addition, 10 troops from other NATO countries died in Afghanistan in September, according to ISAF figures.

The September decline is in line with a trend seen over the last four years in Afghanistan, according to statistics compiled by the independent web site iCasualties, which tracks coalition deaths in Afghanistan and Iraq.

However, this month&rsquo;s decline was more pronounced than usual due to a bloody August that set a monthly record for U.S. casualties in Afghanistan. Much of the August spike was caused by the catastrophic helicopter crash that took the lives of 30 Americans.

A coalition spokesman said the crash and the insurgents&rsquo; inability to effectively take on coalition forces in battle were two reasons for the large drop-off this month.

Because insurgents have had diminishing success in their attacks on coalition forces, they &ldquo;have changed tactics to hitting soft targets for media attention, and increased their use of IEDs,&rdquo; Lt. Col. Jimmie E. Cummings Jr., an ISAF spokesman, wrote in an e-mail response to Stars and Stripes.

Two U.S. civilians died in September&rsquo;s violence, as well &mdash; one a CIA employee shot dead by an Afghan who worked for the U.S., and the other a Navy civilian engineer who was apparently kidnapped and killed, both in Kabul.

The majority of U.S. deaths resulted from improvised bombs, which killed at least 13 Americans, mostly in the southern provinces of Helmand and Kandahar, according to U.S. Defense Department releases. At least 10 others died as the result of small-arms fire, one from a mortar attack, one from a helicopter crash and four others in unspecified hostile attacks.

The drop in U.S. casualties was in line with a coalition claim of decreased violence across the country &mdash; a claim that is in dispute.

A quarterly report from the United Nations released Wednesday asserted that violent incidents from January through the end of August were up 39 percent from the same period in 2010. ISAF quickly rebutted the figure.

The core of the disagreement appears to be a difference of opinion between ISAF and the U.N. over what constitutes a &ldquo;security incident.&rdquo; While the U.N. counts assassinations, weapons finds, arrests and intimidations as such, ISAF does not, according to a coalition spokesman.

&ldquo;The bottom line on this is that the U.N. and ISAF security data differs in category, collection coverage and magnitude,&rdquo; said German Brig. Gen. Carsten Jacobson, the command spokesman, at a press conference Thursday. &ldquo;These differences have resulted in varying conclusions about the security situation in Afghanistan.&rdquo;

The U.N. report did not include information from September, during which former Afghan president Burhanuddin Rabbani was assassinated.