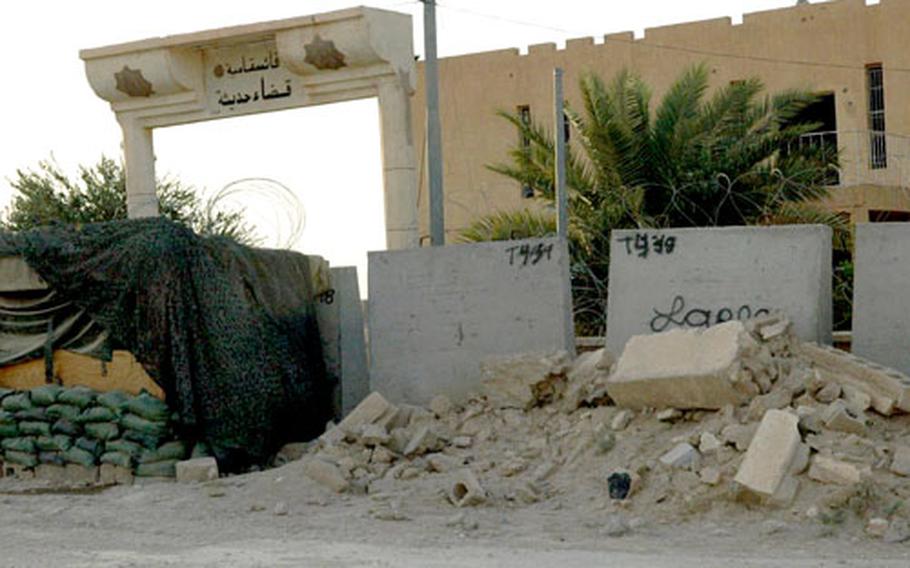 The Haditha Police station has been abandoned since 2004, when insurgents bombed the building and publicly executed police officers. (Andrew Tilghman / S&S)

HADITHA, Iraq &#8212; Lt. Col. Norman Cooling has spent months trying to set up a local police force, but that is proving to be a tough sell in this city where insurgent violence is on the rise and few young men want to be seen working with U.S. forces.

The Marines here are facing a conundrum: They say they need a local police force to curtail the daily insurgent attacks, but locals say the Marines must stop the insurgents&#8217; murder and intimidation campaign before they can feel secure enough to publicly participate in an American-led police force.

The Iraqis may have good reason to be frightened. In 2004, U.S. troops left a local police force in charge when they reduced the number of U.S. forces in the area, presuming that the Iraqis could handle the remaining security problems.

But insurgents crept back into the area and soon rounded up dozens of local police officers and publicly executed them in a soccer stadium.

Some locals suggest that the best way to form a police force is for the Marines to leave the area.

&#8220;I think if you guys just left the city and left the Iraqis to create a police department on our own, then that would work,&#8221; said Ahwad Zaheed, the 26-year-old son of another prominent tribal leader. &#8220;I will not join because people will believe the police are working side by side with the Americans. When I see a pure Iraqi government &#8212; not working with the Americans &#8212; then I will be glad to join the police force.&#8221;

In April, the Marines mounted a recruiting drive, but only five men showed up seeking to be a police officer.

In recent weeks, Cooling has been soliciting advice from local leaders on how best to pursue a police force.

One sheik suggested to Cooling that the Marines find a high-ranking Iraqi officer who everyone knows and respects. That may encourage young men to join in large numbers, the sheik said.

The Marines have contacted a former Haditha resident and former Iraqi soldier whom they hope might lead a police force, but he currently lives in northern Iraq and those discussions are in their early phases.

The Marines have suggested that local young men work with the police chief of the village of Baghdadi, about 20 miles east, but many Haditha residents do not trust that leader and say they will refuse to work with him.

Meanwhile, Cooling is urging locals to set aside their suspicious about the U.S. forces and create a local security force for Haditha and the two nearby cities that make up the area known as the Haditha Triad.

&#8220;I look at the Marines here not as an occupier and an oppressor, but as public servants,&#8221; he told several residents at a small meeting recently. &#8220;We keep coming here to create stability not instability.

&#8220;We have to show the coalition authorities and the Iraqi government that we can maintain stability, so we can leave. If we could believe that good things would happen to the community, Americans would be glad to leave, but that&#8217;s not what happens when we leave places like Haditha.

The Marines have a particularly difficult challenge recruiting for the police force in light of allegations that several of them killed two dozen unarmed civilians in Haditha in November. Iraqi Prime Minister Nouri al-Malik criticized the U.S. military over the allegations, calling it &#8220;a horrible crime.&#8221;