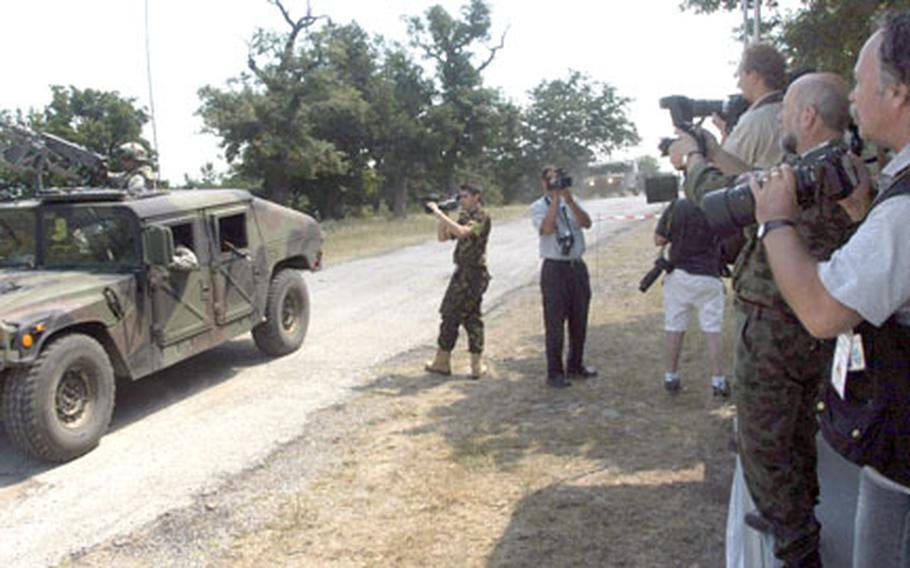 Reporters and photographer from Bulgaria and Romania take pictures from a viewing stand on Wednesday during a demonstration by U.S., Bulgarian and Romanian forces at the Novo Selo Training Area in southeastern Bulgaria. (Charlie Coon / S&S)

That might not be news in America, but it&#8217;s been front page in the former Soviet-bloc nations of Romania and Bulgaria.

&#8220;It was like Romania was trying to win a contest,&#8221; said Alexandra Babiciu, senior reporter for Mediafax, a Bucharest-based wire service. &#8220;The public opinion was that the government should do everything possible to bring the U.S. military to Romania.

In December, Romania signed a 10-year agreement to let the U.S. share some of its military bases. In April, the U.S. finalized the same deal with Bulgaria.

Less than 20 years ago, Romania and Bulgaria were part of what President Reagan called the &#8220;evil empire.&#8221; Now, soldiers from the nations are brothers in arms. Starting next summer, the U.S. is scheduled to start rotating several thousand troops at a time into the two nations&#8217; bases.

Troops from all three nations have been training since July 11 at the Novo Selo base in southeastern Bulgaria in an exercise called Immediate Response 2006. The militaries on Wednesday hosted a media day, and about 40 reporters from the two nations came to watch the troops and ask questions.

For decades, many eastern Europeans have struggled to prosper. Western Europe, on the other hand, thrived with help from the Marshall Plan and other U.S. largesse. The Romanian government has been a strong U.S. ally. In 2003, it allowed the Americans to use the Mihail Kogalniceanu military airfield during its buildup for the invasion of Iraq.

Bulgaria has been slower to buy into U.S. plans. &#8220;In Bulgaria it&#8217;s not quite the same,&#8221; said Alina Grigore, a journalist with Prezent, a Romanian news magazine. &#8220;The eastern influence coming from Russia was much higher in Bulgaria than Romania.&#8221;

The decision on welcoming U.S. troops was hotly debated in Bulgaria, according to Kalina Naidenova, an interpreter-translator from Sofia, the Bulgarian capital. &#8220;People were talking about it amongst themselves,&#8221; Naidenova said. &#8220;Politicians were talking about it on the TV and radio. For Bulgaria in general it was a big story.&#8221;

The buzz in Romania has waned since the government agreed to host U.S. troops. Babiciu, the Romanian wire service reporter, says that will change.