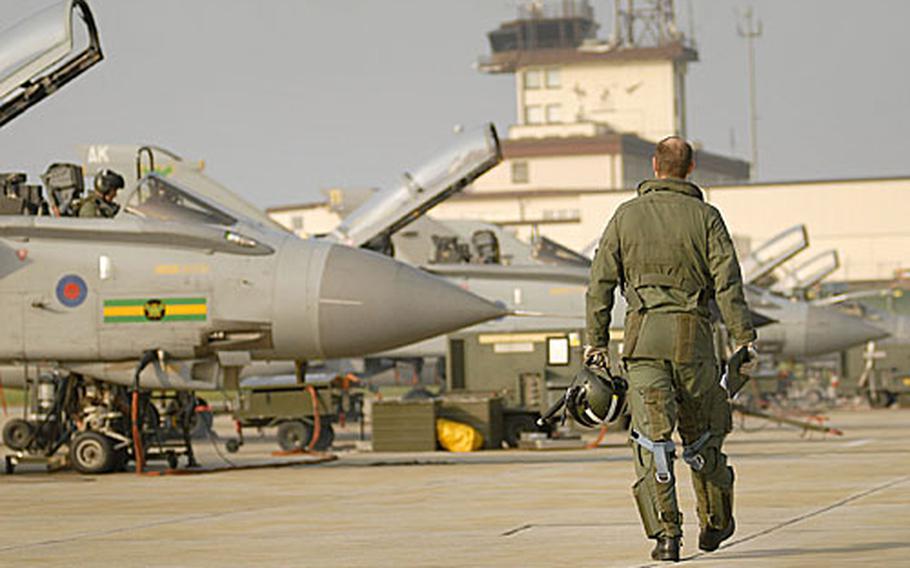 Flt. Lt. Ian Hart, a pilot assigned to IX Squadron ,along with more than 100 Royal Air Force personnel and seven aircraft, deployed to Germany to participate in exercise “Lone Flap,” giving U.S. Air Force F-16 and A-10 aircrews the chance to train with an allied Air Force. (Ben Bloker / S&S)

Flt. Lt. Ian Hart, a pilot assigned to IX Squadron ,along with more than 100 Royal Air Force personnel and seven aircraft, deployed to Germany to participate in exercise “Lone Flap,” giving U.S. Air Force F-16 and A-10 aircrews the chance to train with an allied Air Force. (Ben Bloker / S&S) 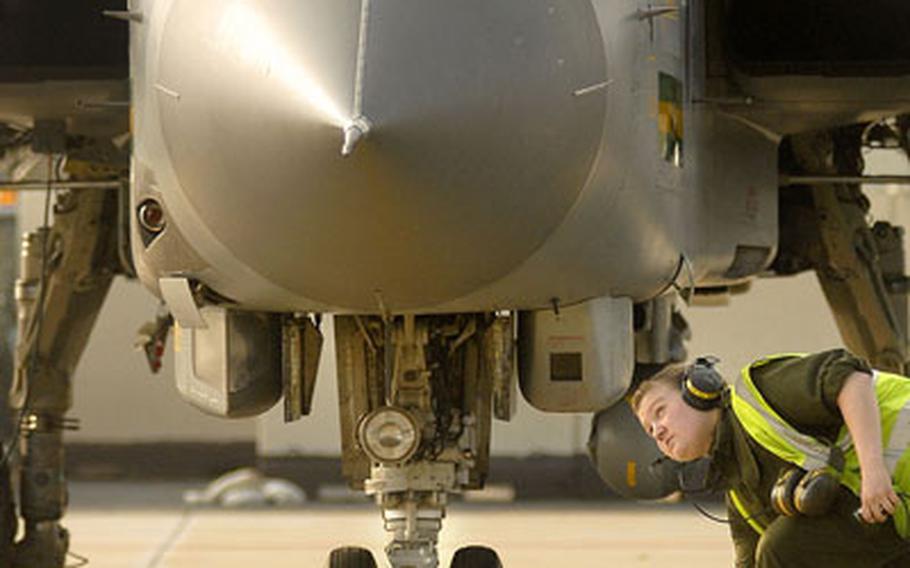 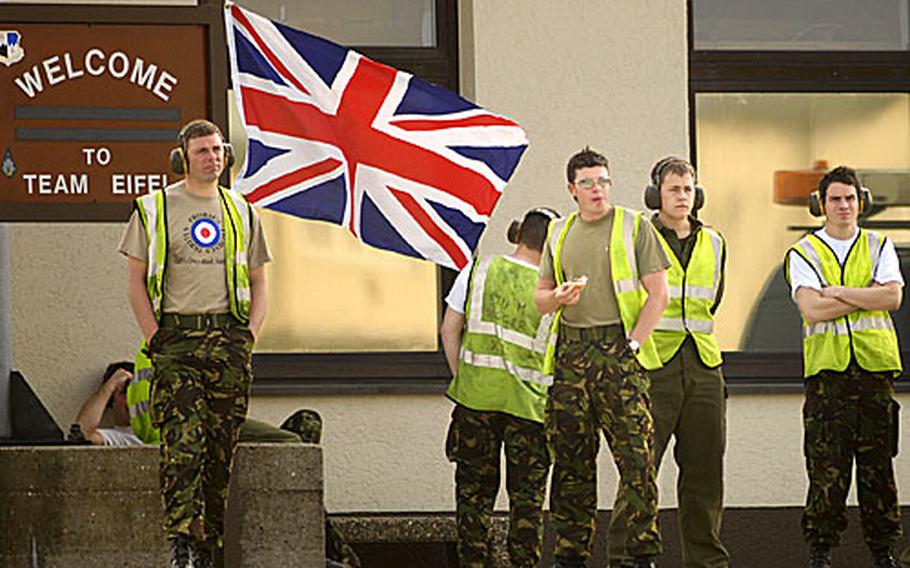 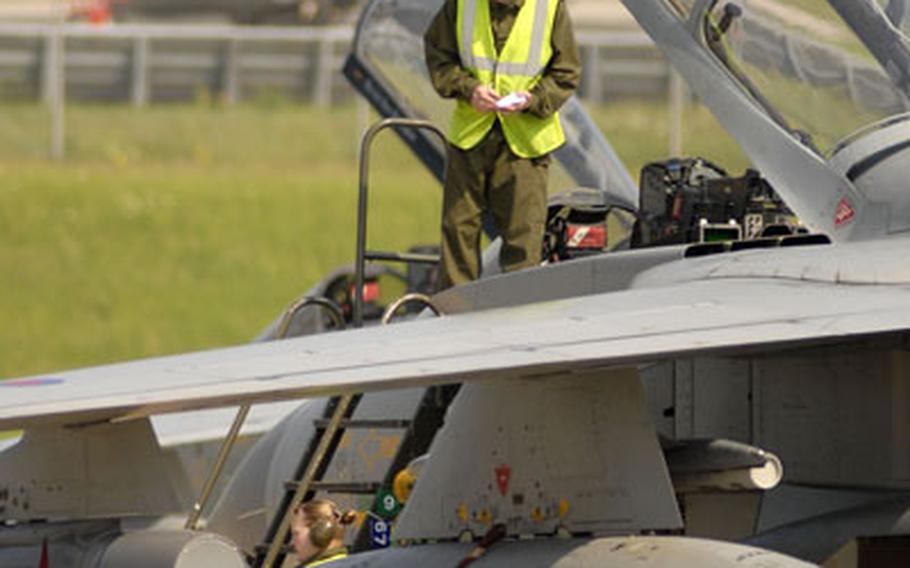 A crew chief assigned to IX Squadron from RAF Marham, United Kingdom, performs a post-flight inspection on a Tornado GR4 after a local training mission at Spangdahlem Air Base, Germany. (Ben Bloker / S&S) 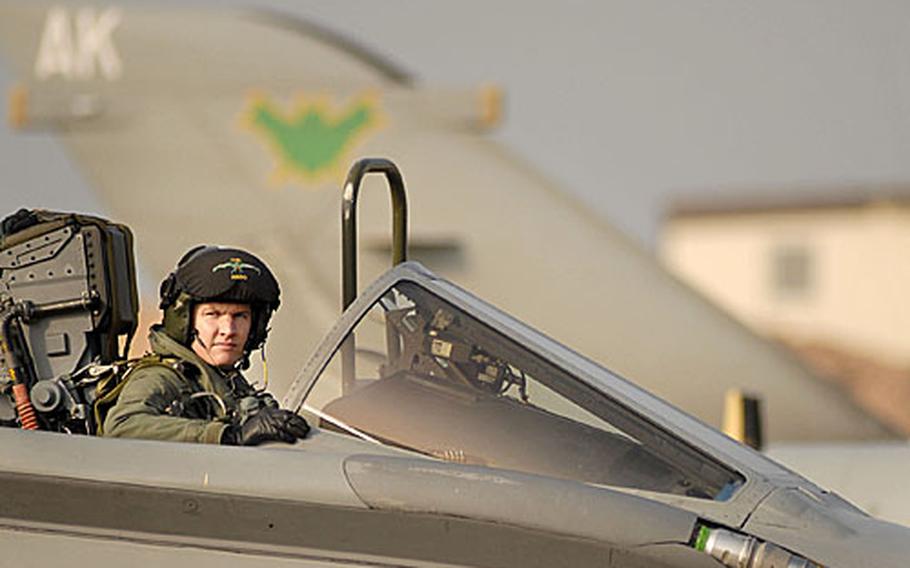 SPANGDAHLEM AIR BASE, Germany &#8212; U.S. and British air force pilots are longtime allies who have fought and are fighting common enemies.

But that doesn&#8217;t necessarily mean they take the same approach in the skies.

While pilots from both countries continue to fly together in Iraq and Afghanistan, the U.S. Air Force and Royal Air Force sometimes differ on tactics and procedures in combat.

Maj. Mike Lay, a U.S. F-16 instructor pilot with the 23rd Fighter Squadron, said that is why exercises like the one American and British pilots participated in at Spangdahlem this past week are important.

Pilots with the RAF&#8217;s No. IX Squadron are in Germany this week to train with Spangdahlem-based A-10 Thunderbolt and F-16 Falcon pilots to improve their joint fighting skills. The exercise is dubbed Lone Flap.

Coordination between the two staunch allies can be critical when pilots are flying together downrange.

A 2005 British army report into a fatal friendly fire incident involving two U.S. Air Force National Guard A-10 Thunderbolts and a pair of British armored vehicles in Iraq highlighted the need to &#8220;train as we mean to operate.&#8221; The March 28, 2003, incident killed a British soldier.

Some practice missions included British pilots helping provide air support to ground troops under the direction of A-10 pilots flying nearby. The A-10 pilots acted as airborne forward air controllers, helping direct the British pilots to the target.

American and British fighter wings have scheduled a series of exercises at various locations across the globe as part of an effort to improve the way they fight together in a coalition.

Wing Commander Dave Waddington, commander of No. IX, said the aim of the series of exercises is to boost their coordination with the Americans. The squadron brought 112 of its members to the Germany&#8217;s Eifel region.

&#8220;I think we&#8217;ve really achieved some good training in these mission-specific objectives. But the wider context is that we&#8217;ve got some really good interoperability work with the wing here,&#8221; Waddington said on Thursday. &#8220;Therefore, in my estimation, we really have achieved what we set out to do.&#8221;