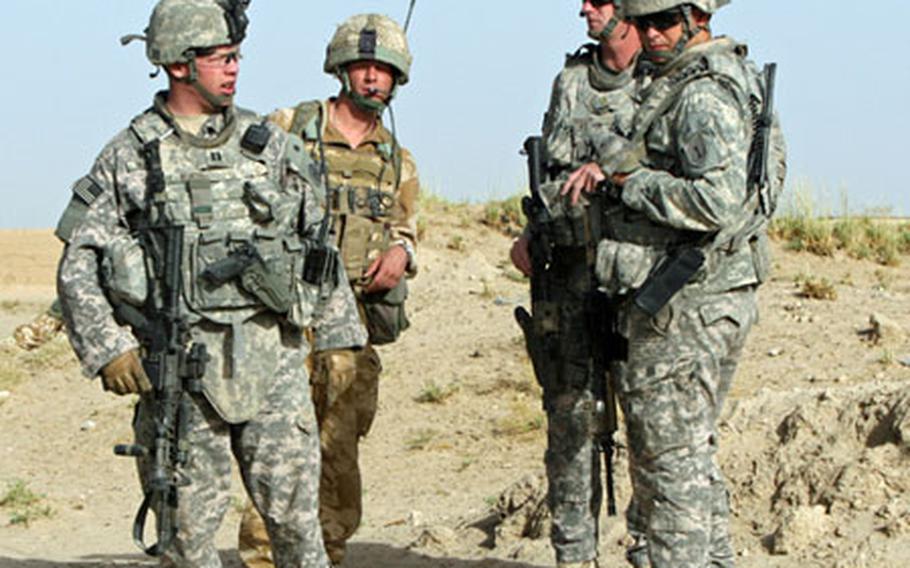 American and British officers wait outside the village of Osman Kheyl, in Afghanistan’s Kandahar province, for a meeting to begin Thursday with local elders. (Drew Brown/Stars and Stripes)

Forward elements of the 1st Infantry Division&#8217;s 2nd Battalion, 2nd Infantry Regiment have been operating in Maywand district, about 45 miles west of Kandahar city. The unit will deploy to the area "late this summer," said a battalion officer.

The beefed-up U.S. presence will add about 1,000 additional foreign troops to Maywand, augmenting several small teams of Canadian and American advisers that are training and mentoring Afghan army and police units in the district.

The development comes as NATO announced Thursday that several hundred French troops had been deployed to train and mentor Afghan security forces in neighboring Uruzgan province, which has also seen a sharp increase in the Taliban-led insurgency.

Soldiers from the Fort Hood, Texas-based 2-2 Infantry Regiment are part of a brigade of 1st Infantry Division troops that were originally supposed to deploy to Nuristan and Kunar provinces in eastern Afghanistan, which has also been wracked by insurgent violence. But after Taliban fighters staged a dramatic jailbreak on a Kandahar prison in June, freeing hundreds of prisoners, many of them militants, the unit was ordered instead to Maywand, Ruth said.

At a meeting here guarded by several hundred U.S., Canadian and British troops, along with Afghan security forces, Mullah Masood &#8212; the government-appointed leader for Maywand &#8212; urged about 80 local elders to cooperate with foreign troops and Afghan security forces to improve life in the district.

"What is the benefit of war?" asked Masood. The district leader himself has been rumored to have links to the Taliban, an accusation that he denies.

Lt. Col. Hugh Williams, the commander of the British 3rd Battalion, Parachute Regiment, also appealed to the elders not to support the Taliban.

"We did not come here to fight the Taliban," said Williams. "We came here to help you rebuild your country."

Williams told the elders that if foreign troops did not have to concentrate on fighting the Taliban, they would be able to provide other services.

It was impossible to gauge whether the appeal would have any effect, although several elders said that the village did need better water supplies.

The meeting was held in the heart of a Taliban-controlled area. An American officer noted that the last time his troops visited Osman Kheyl, they were ambushed by Taliban fighters and a 90-minute firefight ensued.

The meeting Thursday passed without incident.

Violence has risen sharply across southern and eastern Afghanistan in the past two years, with Taliban and other insurgent groups ambushing and bombing U.S. and allied forces in ever-increasing numbers. Civilian deaths linked to the violence have also increased.

There are currently about 70,000 U.S. and allied troops stationed in Afghanistan, with nearly half of them being American. The NATO-led International Security Assistance Force, which oversees operations in the southern part of the country, consists of about 43,000 soldiers from 40 nations, including about 19,000 U.S. troops, but many of the contributing nations have placed severe restrictions on how their forces can be used.

The result in southern Afghanistan has been that most of the fighting has been carried out by Canadian and British troops in recent years, both of which have suffered significant numbers of casualties. Canada threatened to pull out its forces earlier this year, unless other nations contributed more troops, prompting the Pentagon to send 3,500 Marines to neighboring Helmand province, where insurgent attacks have skyrocketed in the past year.

But the deployment of the 24th Marine Expeditionary Unit was intended to serve only as a stopgap measure, and when they deployed earlier this year, Defense Secretary Robert Gates said that they would not be replaced by any additional U.S. forces. The Marines are now nearing the end of their deployment, and it is unclear what forces will replace them.