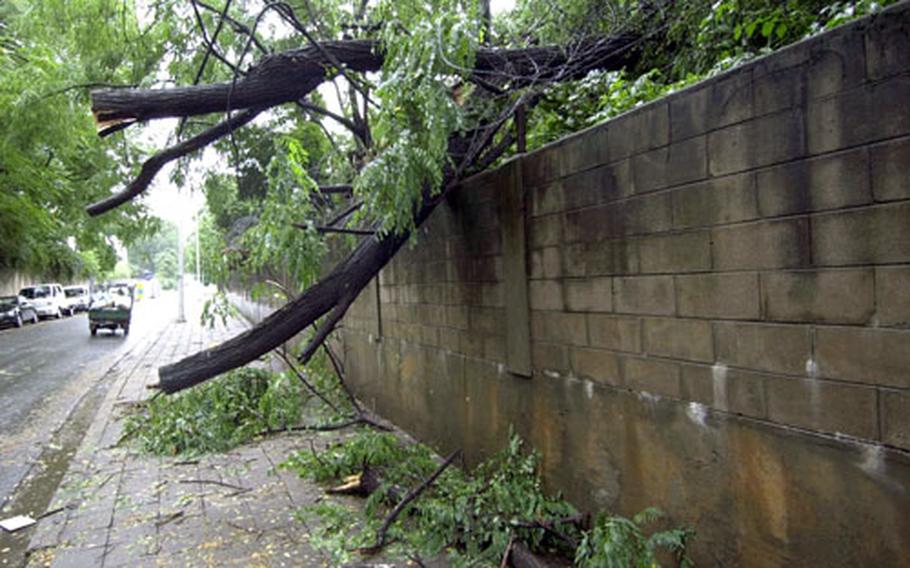 A fallen tree rests over the wall at Camp Coiner early Monday morning. The tree fell Saturday as up to 12 inches of rain drenched the area, washing dirt away from the tree’s roots. (T.D. Flack / S&S)

SEOUL &#8212; U.S. bases suffered relatively minor damage as many areas were hit with up to 12 inches of rain since Saturday, officials confirmed Monday.

Area I saw some damage to Camp Red Cloud&#8217;s golf course and Area IV suffered minor roof leaks. In Area II, a tree fell over Camp Coiner&#8217;s perimeter wall onto the adjacent road on Saturday and a Department of Public Works building was flooded.

&#8220;I think we saw a tremendous improvement this year on how we got ready for the storm,&#8221; Area II Public Works Director Michael Chung said in a news release. &#8220;We focused on preventive maintenance; things like improving drainage and clearing ditches.&#8221;

The death toll from the rains rose to 15 across the country Monday, officials said as they warned of more downpours in the coming days.