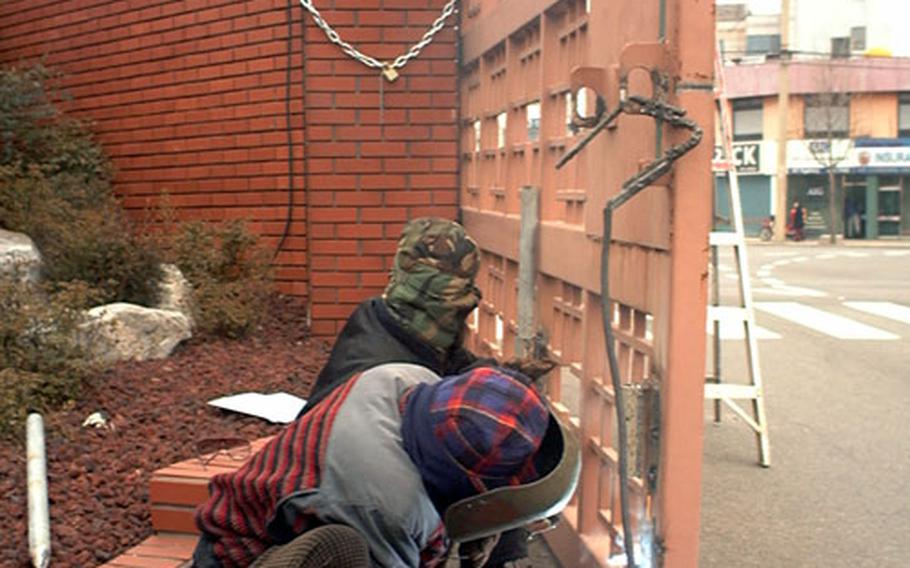 TAEGU, South Korea &#8212; Keeping installations safe and troops trained to defend them are key priorities this year for the Army in lower South Korea, the commander for the region said.

The Army is investing more than a half-million dollars to upgrade security at installations in Area IV, its lower South Korea military district. And it&#8217;s stepping up base-defense training for the region&#8217;s troops, Col. James M. Joyner, Area IV commander, told Stars and Stripes in a recent interview.

Installation security has a priority within the U.S. military throughout South Korea, especially since the Sept. 11, 2001, terrorist attacks.

A wave of anti-American demonstrations surged in South Korea after a U.S. military court in November acquitted two U.S. soldiers whose armored vehicle struck and killed two South Korean schoolgirls in a roadside mishap in June.

Some demonstrations were violent: Molotov cocktails and other objects were thrown onto U.S. military installations. Some protesters even got inside the gates. In other incidents, U.S. servicemembers were harassed off post and an officer in civilian clothes was attacked at knife-point but escaped with minor injuries.

Much of it consisted of identifying and sealing points along installation perimeters that intruders might have found easy to breach.

Concertina wire and other security devices were used. &#8220;We put concertina on top of the gates themselves, swinging gates, to make it where no one could climb over easily,&#8221; said James Hamilton, the 20th SG&#8217;s public works director for Taegu.

&#8220;We put concertina on top of buildings that were close to the perimeter walls, so that people could not use those against us as they climb over and step onto a building,&#8221; Hamilton said.

Public works crews also are working to make it harder for would-be intruders to use telephone poles standing just inside perimeter walls. Workers have removed lower courses of the bolt-like steps repair crews use as ladders. The bolts start about six feet from the ground but crews are removing them to a height of 15 feet.

For phone poles nearest the walls, crews are ringing concertina wire even with the top of the wall, another device to hinder entry.

In addition, new manhole covers can be opened only from above ground, from inside the post.

And at Camp George and Camp Hialeah, welding crews reconfigured grillwork to make openings too narrow to admit an intruder.

But Joyner has said he also wants troops kept up to speed on the basics of defending installations against both demonstrators&#8217; actions and wartime attacks by enemy forces. He&#8217;s directed that the weekly Thursday &#8220;Sergeants&#8217; Time&#8221; be used to instruct soldiers in those basics.

Instructors from area military police units also will be brought in to give riot-control training.

&#8220;A lot of times, we have an MP instructor who will &#8230; give us instruction in how to do the takedowns, how to put the demonstrators into flexi-cuffs, and what are the actions that they do while they put them in a holding area until the MPs come and take them off our hands,&#8221; Widener said.

Spc. Daniel Jones pulled his share of 24-hour guard shifts, and thinks the added training will be a benefit.

&#8220;We can learn how to protect ourselves and the local civilians without injuring anybody else in the process,&#8221; said Jones, an Army Substance Abuse Program counselor at Camp Henry.

New emphasis, said Widener, also will be placed on watching for signs of suspicious activity and shortcomings in the installation&#8217;s security.