U.S. bases in Japan survive the wrath of Typhoon Mawar 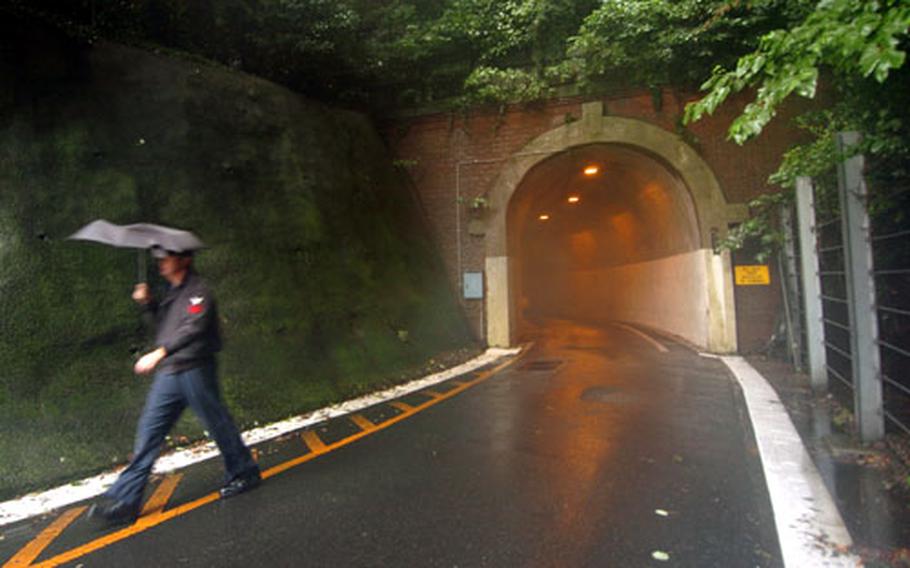 Petty Officer 1st Class David Keohan from Afloat Training Group walks under an umbrella as Yokosuka Naval Base gets pelted Thursday with rain at the leading edge of Typhoon Mawar. (Christopher B. Stoltz / S&S)

Petty Officer 1st Class David Keohan from Afloat Training Group walks under an umbrella as Yokosuka Naval Base gets pelted Thursday with rain at the leading edge of Typhoon Mawar. (Christopher B. Stoltz / S&S) Typhoon Mawar brought heavy rains and gusty winds to U.S. military installations on the Kanto Plain early Friday after slamming onshore just before midnight near the Chiba Peninsula, which sits southwest of Tokyo.

Tech. Sgt. Shaun Autrey, a typhoon duty officer for Yokota Air Base&#8217;s 20th Operational Weather Squadron, said the storm knocked down trees, caused minor damage to buildings and snapped power lines at Yokosuka Naval Base, where winds reached 71 mph. Leaves and small branches were down in other locations, but no injuries were reported in the region.

Mawar packed maximum sustained winds of 100 mph, with gusts to 125, when it made landfall. The strongest winds at Tokyo&#8217;s Haneda Airport were 55 mph during the storm&#8217;s peak.

Camp Zama and Atsugi received about 6 inches of rain, while roughly 5 inches fell at Yokota. Yokosuka reported 3 inches of precipitation from Mawar.

Military forecasters said the storm could generate 46-mph winds and up to 2 inches of rain at Misawa Air Base in northern Japan later Friday before vacating the mainland.

Base officials had taken some precautions Thursday afternoon.

At Camp Zama, soldiers and other U.S. Army Japan personnel were released from duty at 4 p.m. and not expected back until noon Friday.

Exercises under way on Camp Fuji&#8217;s ranges were halted temporarily as Marines returned to dormitories.

All Atsugi facilities were closed at 10 p.m. Thursday.

Juliana Gittler contributed to this report.