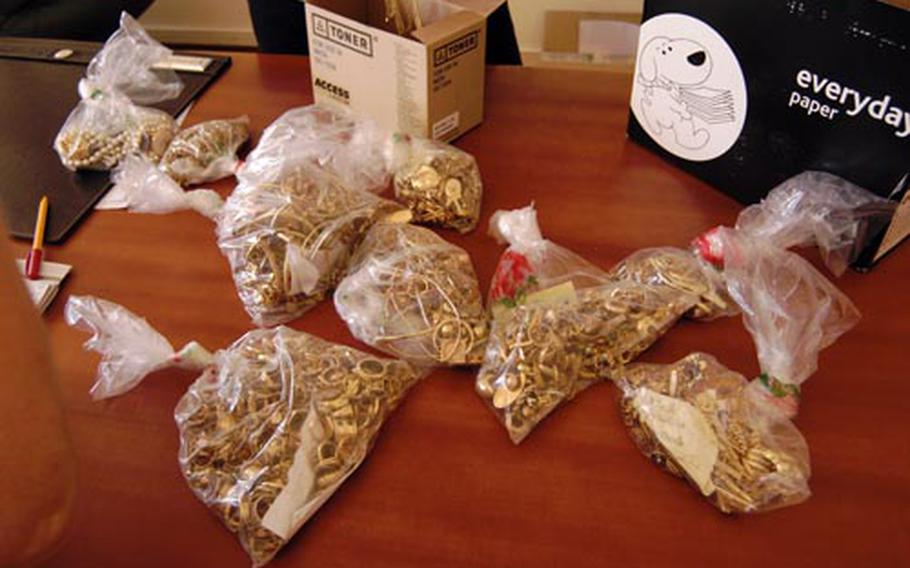 Italian Carabinieri recovered hundreds of pieces of stolen jewelry in the town of Alife in Caserta Province. Officials arrested 30 people in connection with the theft. (Courtesy photo / U.S. Navy)

NAPLES, Italy &#8212; The Carabinieri have recovered hundreds of pieces of stolen jewelry in the town of Alife in Caserta province.

Italian officials informed the Naval Criminal Investigative Service office on Capodichino of the arrest of 30 suspects, including Italian and foreign citizens.

The suspects had the stolen loot when they were arrested on July 21, officials said.

The Carabinieri posted photos of the stolen jewelry on their Web site, www.carabinieri.it/Internet/Cittadino/Servizi/BancheDati/OggettiRinvenuti.

The site, which is in Italian, requires viewers to select an area (Provincia) and then the type of article that was stolen. The search also can be narrowed by including the date that items were lost or stolen.

NCIS officials said they can help victims who identify a stolen item recover it.

"If you think you recognize anything on the Web site, you can contact our office and we can help arrange for you to see it in person," said Janice Reitzell, a special agent assigned to NCIS. "You have to provide some proof that the item belonged to you. A receipt would be best, but a photo of you wearing it can also be used," she said.

Identification could prove difficult, as much of the jewelry is generic, including plain wedding bands with no engraving, bracelets and necklaces. Many of the pieces of jewelry were found with gem stones removed from their settings, NCIS officials said.