U.S. base projects continue in Iraq despite plans to leave 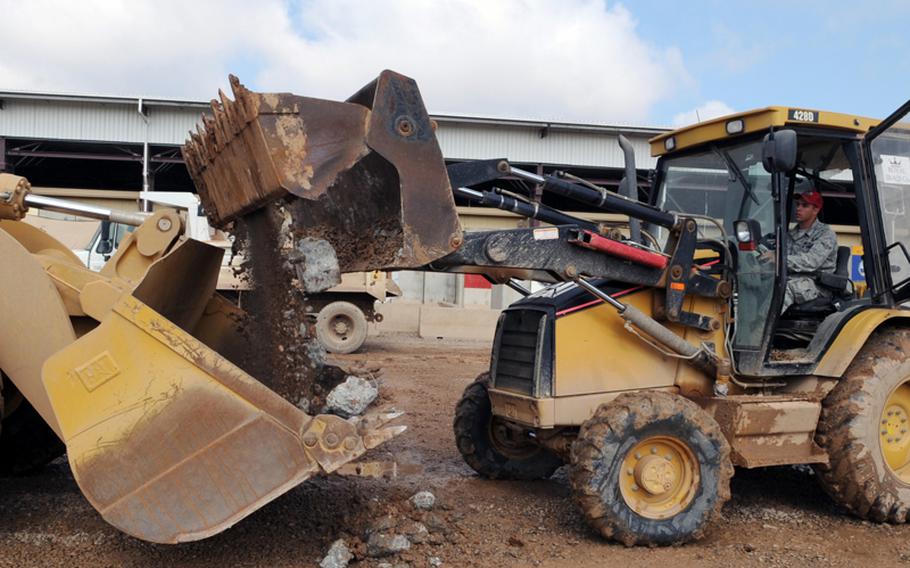 Airman Britton Busbee removes dirt and rocks from a parking lot during construction of the transient village at Joint Base Balad, Iraq, on March 2. (Brittany Y. Bateman/Courtesy of the U.S. Air Force)

Airman Britton Busbee removes dirt and rocks from a parking lot during construction of the transient village at Joint Base Balad, Iraq, on March 2. (Brittany Y. Bateman/Courtesy of the U.S. Air Force) 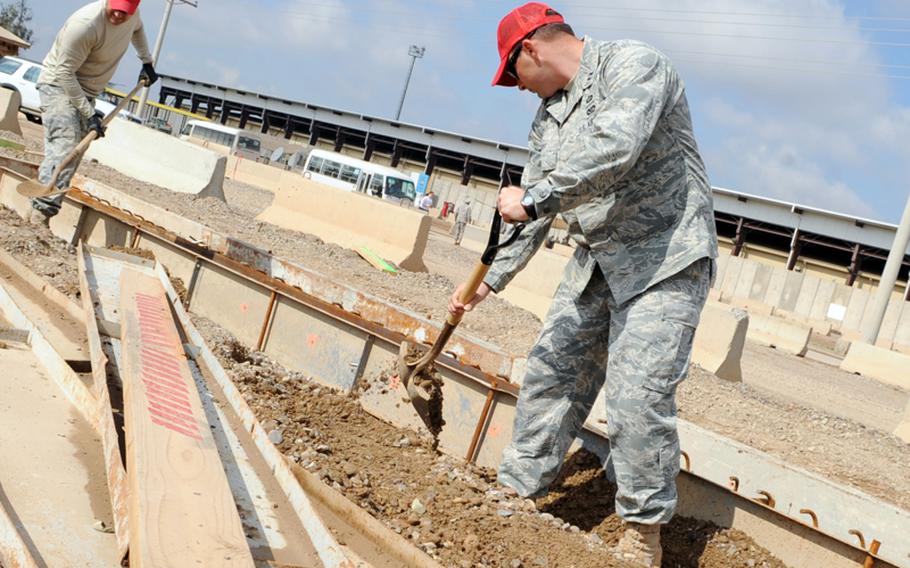 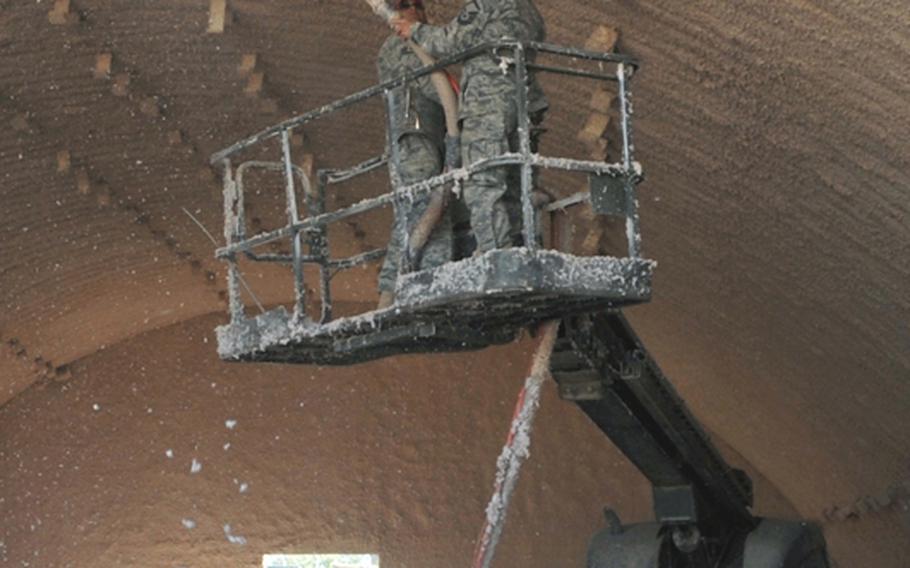 Staff Sgt. Juan Robles, left, and Master Sgt. Chip Koons spray acoustic insulation on the ceiling of a building during construction of a transient village at Joint Base Balad, Iraq, on March 31. (Brittany Y. Bateman/Courtesy of the U.S. Air Force) 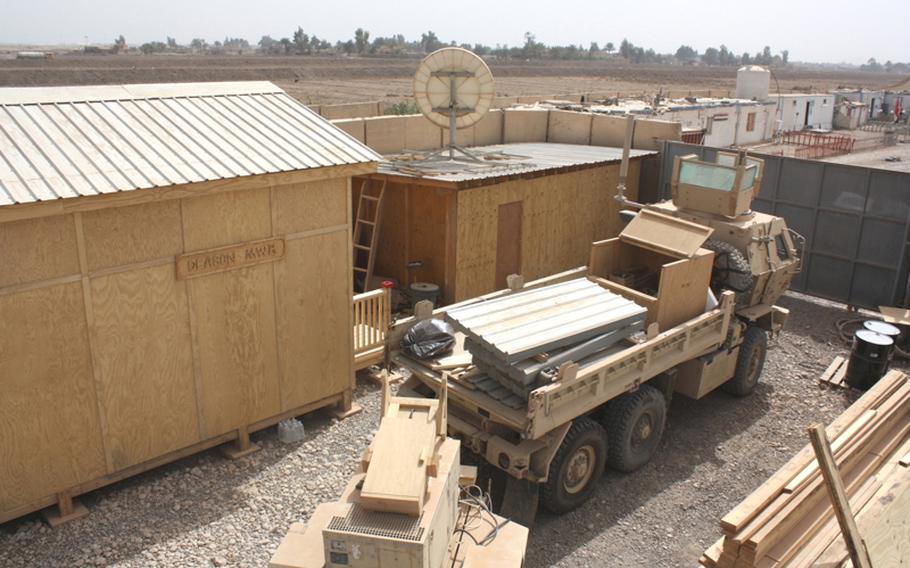 With their supplies loaded up, soldiers with the 1434th Engineer Company finish up the construction of a building at Joint Security Station Deason, south of Baghdad, on March 10. The building was to offer space for religious services and for soldiers to use the telephones and Internet. (Brittany Y. Bateman/Courtesy of the U.S. Air Force) 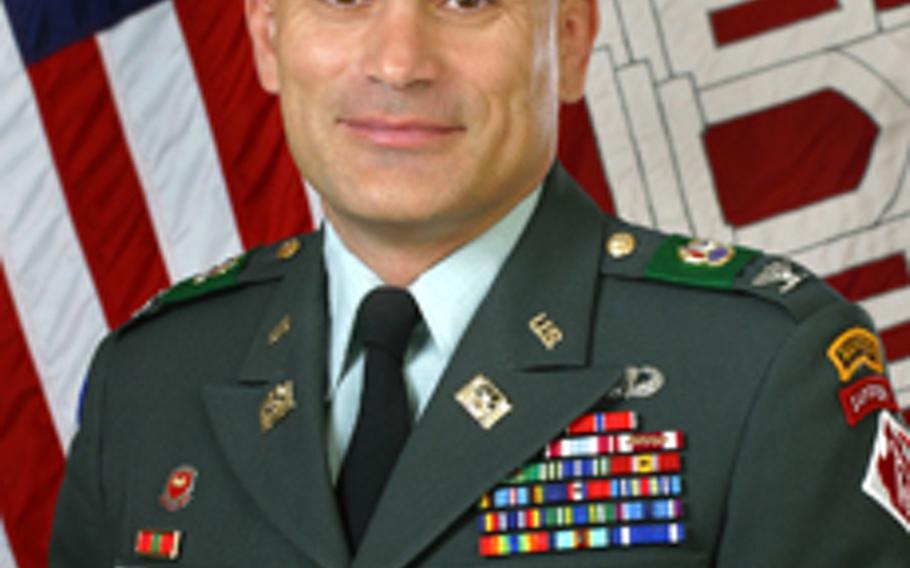 The same day, according to military records, construction crews at Camp Adder, a sprawling U.S. air base in southern Iraq, broke ground on a $61 million series of aircraft shelters. Over the next 14 months, the military started work on an additional $150 million in new base construction in Iraq, representing the culmination of a years-long building effort that continued even after the U.S. formally agreed to leave the country and began laying plans to depart.

In all, the military finished $496 million in base construction projects during 2009, the highest annual figure since the war began and nearly a quarter of the $2.1 billion spent on American bases in Iraq since 2004. An additional $323 million worth of projects are set to be completed this year, according to figures provided by the U.S. Army Corps of Engineers, which oversees base construction.

Some of the recently completed work began years ago, including $137 million in projects started during 2007, when the military was sending additional troops to Iraq as part of the surge. Most began in 2008.

With about 100 bases slated to be closed or turned over to the Iraqi military this year, officials say there will be no further large scale projects beyond what is in the works.

&ldquo;All these legacy projects from 2008, at that time there was very much a need for them,&rdquo; said U.S. Army Col. Dionysios Anninos, the commander of the Corps of Engineers&rsquo; Gulf Region Division. &ldquo;Everything that we have built clearly was for (U.S.) operations, but the long term vision has always been, as we transition out and the Iraqis gain capacity, they would take over these facilities.&rdquo;

In one example, work began on a $68 million detention center at Camp Taji north of Baghdad on Nov. 14, 2008, just over a year after a contract was awarded for the project. The center, which can house 5,000 prisoners and includes a medical center, classrooms and a textile mill for job training, was largely completed Jan. 31, though minor work continues. It was turned over to the Iraqis in March along with about 2,900 prisoners.

Scott Harris, a Corps of Engineers spokesman, said the project and work at other U.S. detention centers were designed to give Iraq a &ldquo;modern prison system focused on rehabilitation and humane treatment.&rdquo;

Under military regulations, base construction projects costing more than $250,000 had to be approved by a panel of field grade officers at the U.S. headquarters in Baghdad. Projects under $250,000 could be approved by base commanders.

Base construction represents only a fraction of the total cost of the war in Iraq, which the Congressional Budget Office estimated will be $1.9 trillion when it&rsquo;s finally reckoned. The Corps of Engineers has completed nearly $10 billion in reconstruction projects across Iraq.

The bulk of U.S. base construction work completed last year or scheduled to wrap up this year centered on a handful of large bases that have long served as hubs for the U.S. presence in Iraq. Just four bases &mdash; Joint Base Balad, a logistics hub in northern Iraq; Camp Adder in the south; Al-Asad Air Base in the west and the Victory Base Complex around Baghdad International Airport &mdash; account for roughly $473 million in work, ranging from a $33 million security perimeter at Adder and a $29 million administrative building at the Victory complex to a $5 million laundry facility at Al-Asad.

Those posts were among the bases set out by military planners as an &ldquo;enduring&rdquo; part of the U.S. presence in Iraq following the 2003 invasion. At the time, Bush administration and military officials openly discussed the possibility of using bases in Iraq as long-term staging points for U.S. air power relocated from Saudi Arabia and elsewhere in the Persian Gulf.

In March 2004, then-Brig. Gen. Mark Kimmitt, a deputy commander of operations in Iraq, told The Chicago Tribune that enduring bases were &ldquo;a blueprint for how we could operate in the Middle East.&rdquo;

U.S. officials have long since disowned that vision, but infrastructure for U.S. aircraft remained a key component of base construction over the past year and a half, with runways, aircraft shelters and the like accounting for about $156 million at the three key air bases of Adder, Al-Asad and Balad.

Many observers both inside and outside the military believe the nascent condition of the Iraqi Air Force, which remains years away from being able to defend the country&rsquo;s skies, could lead the Iraqi government to request that a U.S. training force remain in the country beyond 2011 &mdash; most likely at Balad, currently home to more than 20,000 U.S. troops.

Anninos said the Corps of Engineers is also overseeing some $38 million in Iraqi government-funded construction at U.S. bases in Baghdad and Tikrit where the Iraqi military also maintains a growing presence. Most of those projects focus on infrastructure for the Iraqi air force, such as air traffic control towers.

Many longtime U.S. bases have come to resemble fortified towns with their own trailer parks, fast food restaurants and recreation centers. And like towns, large bases have expensive needs. Across Iraq, the work completed since the start of 2009 included four landfills at a cost of $2.2 million, $4 million in trash incinerators, $54 million in water and waste-water projects and $88 million in new or upgraded dining facilities.

A new dining facility complete with a protective roof was completed at Camp Delta in southern Iraq in December. The project cost $30 million, but Anninos said it had already proven its value. Shortly after the new facility opened, a mortar round crashed into the old, uncovered dining hall.