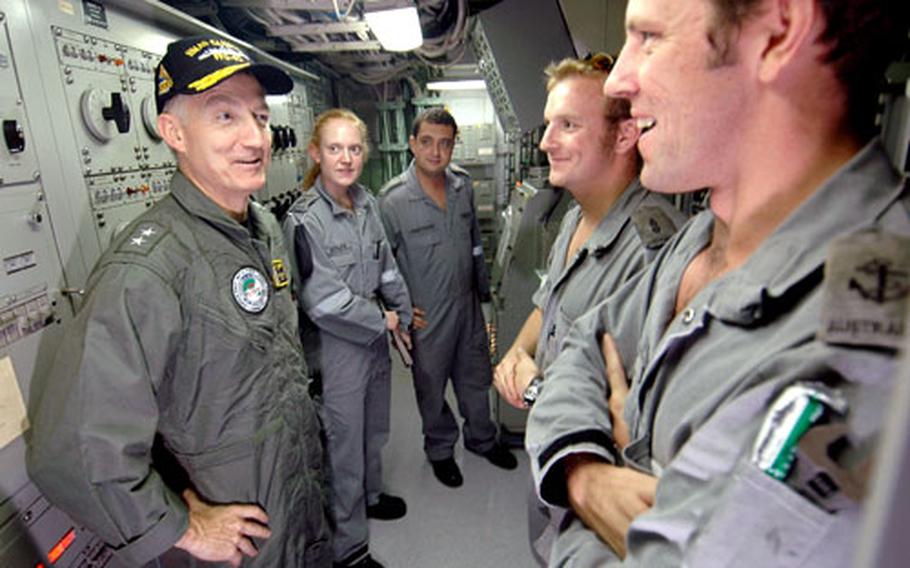 U.S. and Australian forces launched one of the region&#8217;s largest bilateral training exercises last week, to set up a combined command task force and later to conduct air, sea and land combat assaults, among other missions.

Talisman Saber, a roughly three-week series of exercises in Australia, combines the activities of two previous bilateral exercises, Tandem Thrust and Crocodile. About 12,000 U.S. and 6,000 Australian personnel from all service branches will participate.

The exercise begins by setting up a combined task force and continues with a series of training missions, including attacking and sinking two decommissioned Navy ships and a massive paratroop drop over land.

When South Asia was hit by devastating tsunamis late last year, planners simply called the same people they had been working with on Talisman Saber to set up the real combined task force that responded. &#8220;We responded very quickly. It was very effective,&#8221; said Australian Army Lt. Col. Michael Prictor, deputy planner for the exercise who became chief planner for Australia&#8217;s tsunami relief efforts.

The command post phase, which is mainly computer-simulated, includes a range of events including a war between two hypothetical island nations.

The second half of the exercise focuses on real-world land, sea and air training, including live-fire exercises.

During the field training, naval aviators and air force personnel will attack and sink two specially prepared decommissioned Navy ships brought in from Hawaii for a hulking and demolition exercise.

The navies also will practice ship-to-ship operations, anti-submarine warfare training and amphibious landings. About 26 U.S. and Australian ships are participating.

The exercise will hone the skills of participants, planners say, while developing future relationships. &#8220;The most significant part is the planning that&#8217;s already happened,&#8221; said U.S. Marine Col. E.G. &#8220;Rick&#8221; De Guzman, lead planner for the exercise and the 7th Fleet Marine Officer.

Talisman Saber will be held every two years beginning this year. The exercise involves fewer numbers of forces this year than in past exercises due to both nations&#8217; commitments in the Middle East and to tsunami-relief missions, he added.

Exercise commander and 7th Fleet Commander Vice Adm. Jonathan Greenert said in opening remarks launching the exercise Tuesday that participants are committed to protecting the environment during the exercise.

&#8220;Environmental protection plays a key role in measuring the success of Talisman Saber,&#8221; he said, according to a Navy transcript. &#8220;Proper procedures for handling waste, preventing pollution, and protecting endangered species, marine mammals and other environmental resources have been created and will be enforced.&#8221;

The following U.S. units are participating in Talisman Saber in Australia during the remainder of June: