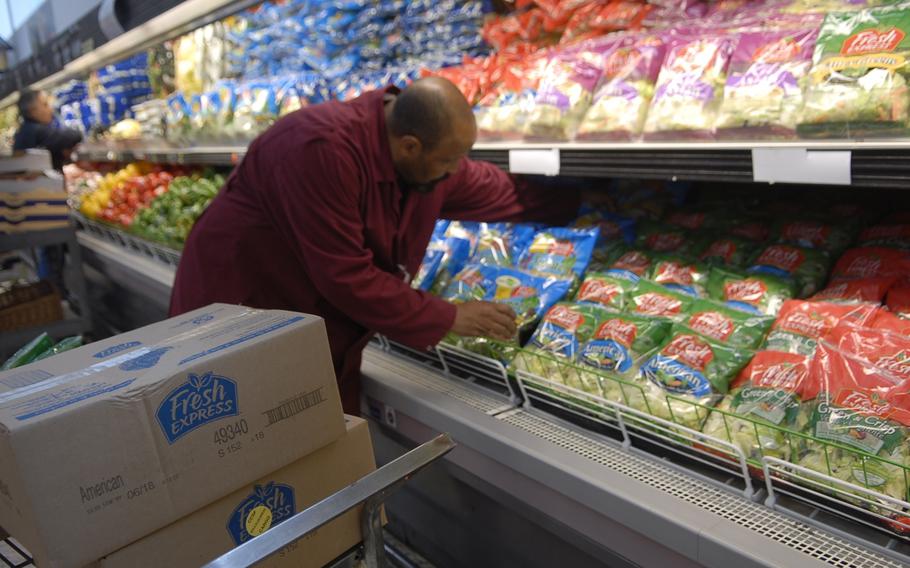 Buy Photo
Garry Briggs, a store worker leader for the commissary at Ramstein Air Base, Germany, fills shelves Wednesday with bags of lettuce airlifted from the States. (Jennifer H. Svan/Stars and Stripes)

Buy Photo
Garry Briggs, a store worker leader for the commissary at Ramstein Air Base, Germany, fills shelves Wednesday with bags of lettuce airlifted from the States. (Jennifer H. Svan/Stars and Stripes) 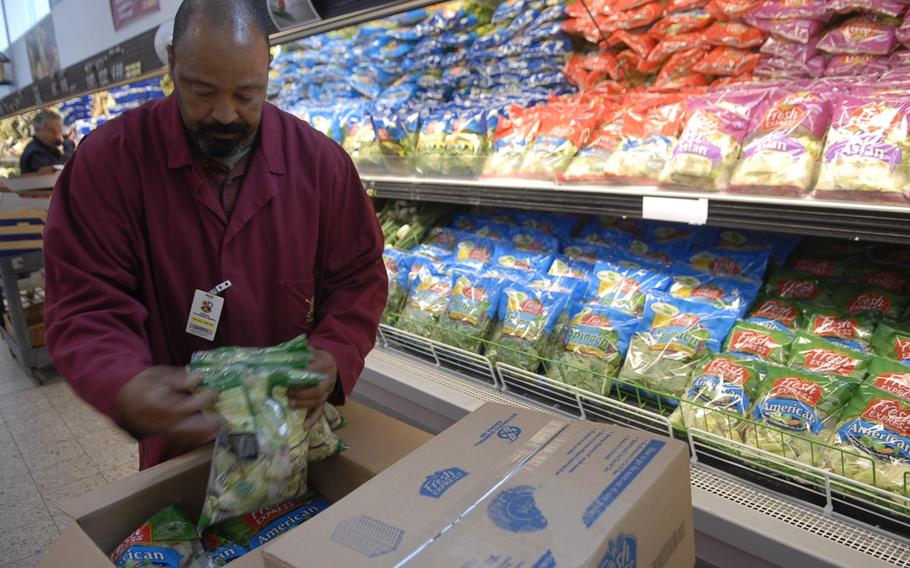 Buy Photo
Garry Briggs unpacks a box containing bags of lettuce Wednesday at the commissary at Ramstein Air Base, Germany. The Defense Commissary Agency Europe tripled its supply of bagged lettuce from the States during the current E. coli outbreak. (Jennifer H. Svan/Stars and Stripes) 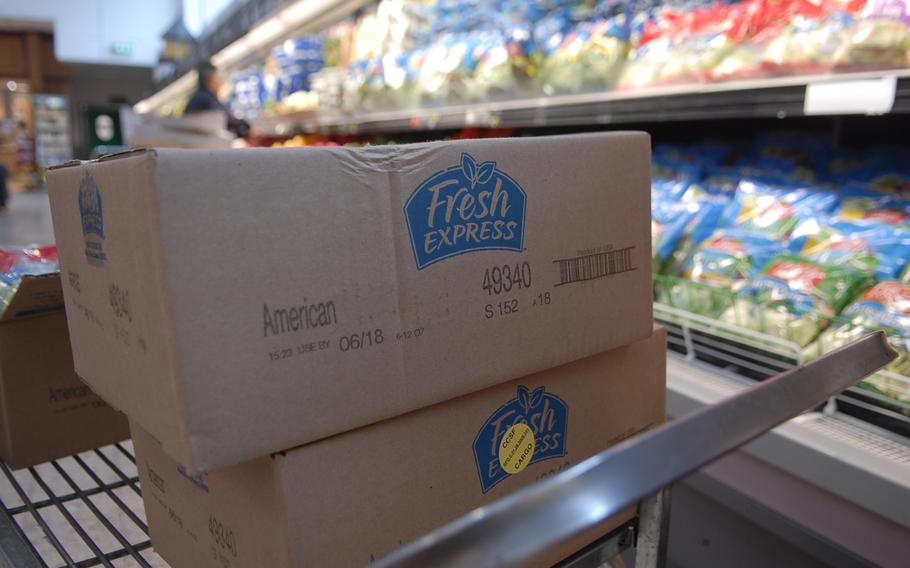 Buy Photo
The Defense Commissary Agency Europe tripled its supply of bagged lettuce from the States after an advisory was issued against selling European-grown lettuce, raw tomatoes and cucumbers because of an E.coli outbreak. With the advisory lifted Friday, DECA plans to restock its shelves with those products as quickly as possible. (Jennifer H. Svan/Stars and Stripes)

KAISERSLAUTERN, Germany &mdash; The U.S. Army in Germany lifted its warning Friday against eating raw tomatoes, cucumbers and lettuce after German health authorities concluded that bean sprouts &mdash; and not other produce, as once feared &mdash; were the source of the deadly E. coli outbreak.

&ldquo;When the Germans announced that they considered those (vegetables) low-risk, we looked at what evidence we already had and decided to follow their recommendation,&rdquo; said Phillip Tegtmeier, Europe Regional Medical Command spokesman.

German health authorities are also advising people to avoid eating raw sprouts and to throw away any old sprouts as well as any food that may have come into contact with them. Commissaries and eateries on U.S. bases in Europe aren&rsquo;t restricted from selling or offering sprouts because they are procured through a DOD-approved source outside Germany, according to Army officials.

That source gets inspected by U.S. veterinary food safety officials, Tegtmeier said. &ldquo;We are confident that the risk is very low from that vendor,&rdquo; he said.

The easing of the Europe-wide restriction on tomatoes, cucumbers and lettuce means that commissaries, dining facilities and restaurants at U.S. military bases in Europe can bring back those products.

&ldquo;We&rsquo;re working as quickly as possible with our produce suppliers to get these items back on our shelves,&rdquo; said Leslie Brown, Defense Commissary Agency Europe spokeswoman.

The time it will take to restock depends on several factors including ordering lead time, delivery schedules and store location, Brown said.

Tomatoes, cucumbers and lettuce began disappearing from base salad bars, store shelves and fast-food restaurants last month after U.S. Army health officials warned against eating vegetables, which were initially the focus of Germany&rsquo;s investigation into the source of the E. coli outbreak.

Base agencies had been scrambling to fill the void. DECA tripled its inventory of bagged salads and lettuce airlifted from the States, with the supplier picking up transportation costs, DECA officials said.

DECA and the Defense Logistics Agency Europe and Africa, which supplies military dining facilities, were exploring other options to get fresh cucumbers, tomatoes and, for the chow halls, lettuce from outside Europe, but so far hadn&rsquo;t found anything viable, officials said earlier this week.

Army officials cautioned in Friday&rsquo;s advisory that &ldquo;specific sources of the outbreak remain uncertain and have not been confirmed.&rdquo;

German health authorities say the rate of new infections has gone down, but they don&rsquo;t know if that&rsquo;s due to fewer people eating salads or to the outbreak waning. The outbreak has killed at least 31 people and sickened nearly 3,000, most of them in Germany, since early May.

No Defense Department personnel or family members were confirmed to have been infected by the virulent strain of E. coli bacteria present in the current outbreak, according to Army officials.

Test results on a soldier from the Heidelberg area who last week suffered with intestinal problems came back negative for E. coli, Tegtmeier said Friday.

An airman from Spangdahlem Air Base was also tested for the bacteria, but those results were negative, too.