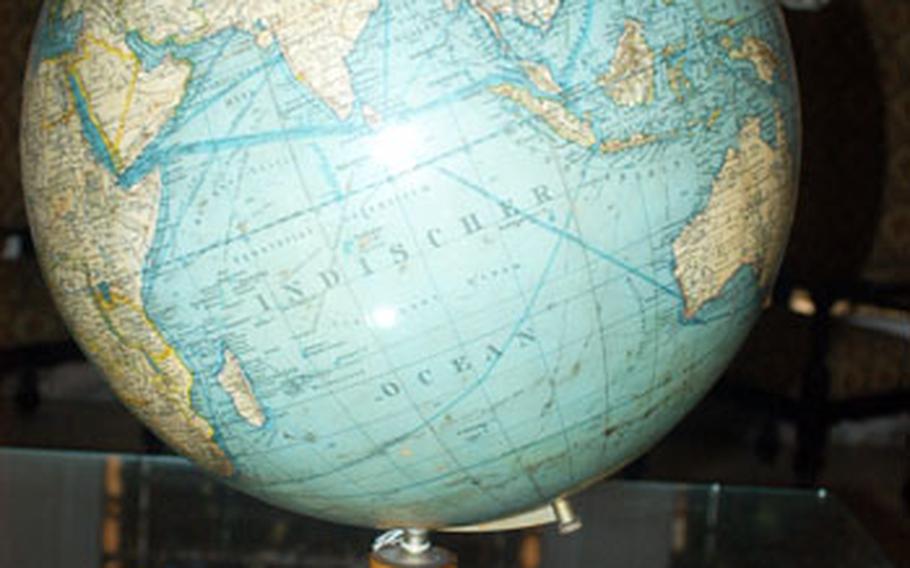 A globe historians say almost certainly was used in Hitler’s office in the Bavarian Alps is part of a collection U.S. Army forces appropriated in 1945 that now resides in Campbell Barracks. (Nancy Montgomery/S&S)

There was the fake one Charlie Chaplin bounced around in "The Great Dictator," Chaplin&#8217;s 1940 satire of the megalomaniacal tyrant.

There are the ones in museums, and the missing one, from his office in the New Reich Chancellery.

There was one boxed up by a U.S. soldier at the end of World War II, sent home and sold at auction two years ago for $100,000 &#8212; to the man who wrote the Rice-A-Roni jingle and has threatened to sue Tom Cruise for using the globe&#8217;s likeness in his latest movie.

And U.S. Army Europe has one, too.

It sits on a table, also thought to have been used by Hitler at his office in the Bavarian Alps, now in the lobby of the Keyes Building, where U.S. Army Europe Headquarters is located on Campbell Barracks.

"Almost certainly they were a part of his office in Berchtesgaden," said Andy Morris, a U.S. Army historian. "We can&#8217;t prove it, but we think."

"We took a lot of things at the end of the war," Morris said. "If it was German army or Nazi party, we appropriated it. We had to have some place to put all our soldiers, and later, their families. We appropriated Campbell Barracks."

The globe is similar to one that then-Warrant Officer John Barsamian found in 1945 in Hitler&#8217;s bombed-out house in Berghof, Bavaria.

Barsamian did the paperwork then required by U.S. Army authorities to ship the globe home. "The rules were different then," Morris said.

Barsamian kept the globe until he was 91 years old, then sold it at a 2007 auction in San Francisco. The globe was expected to bring $20,000. It sold for five times that to collector and ad man Bob Pritikin.

Morris said he&#8217;s unaware if the Keyes Building globe has been assessed.

The globe and table &#8212; along with chairs and a painting also thought to have once been in Hitler&#8217;s Bavarian office &#8212; were the subject of a story in the German news magazine Der Spiegel more than a decade ago. The magazine said then that plans to hand over the items to the Bavarian government were in the works. But a U.S. Army Europe spokesman told Stars and Stripes then, "We have a continuing need for them at this time."

So there they still are.

"If the U.S. Army ever leaves, that stuff will all go back to the Bavarian government, to whom it ultimately belongs," Morris said.

Plans still call for U.S. Army Europe to vacate Heidelberg for Wiesbaden in the next couple of years, although the dire straits of the U.S. economy and a new administration are causing renewed speculation that Army transformation plans may indeed be altered.

In the meantime, Col. William Gallagher, USAREUR deputy chief of staff, whose office includes an ornately carved, marble-topped end table thought to have been used in Hitler&#8217;s Bavarian office (he keeps a lamp and a framed photo on it), isn&#8217;t all that fascinated with it.

He points out that the Keyes Building itself once housed a German Army unit in World War II, and had a ballroom and bar. Three stained-glass windows in the lobby custom-made in 1938 depict Germanic reasons for becoming soldiers throughout the ages: for love, in the chivalric tradition in the 13th century; for "Volk and Reich," or folk and country, in World War I; and, in the 15th century, for pay.

But the most resonant thing for Gallagher is thinking of the Americans who, after defeating Nazi Germany, had been in the building &#8212; both family members and larger-than-life heroes.

It&#8217;s highly likely Eisenhower had meetings here. Patton would no doubt have been to briefings here. "So it does give me a sense of the significance of the mission," he said, "that you&#8217;re walking some of the same halls as giants in our history have walked."