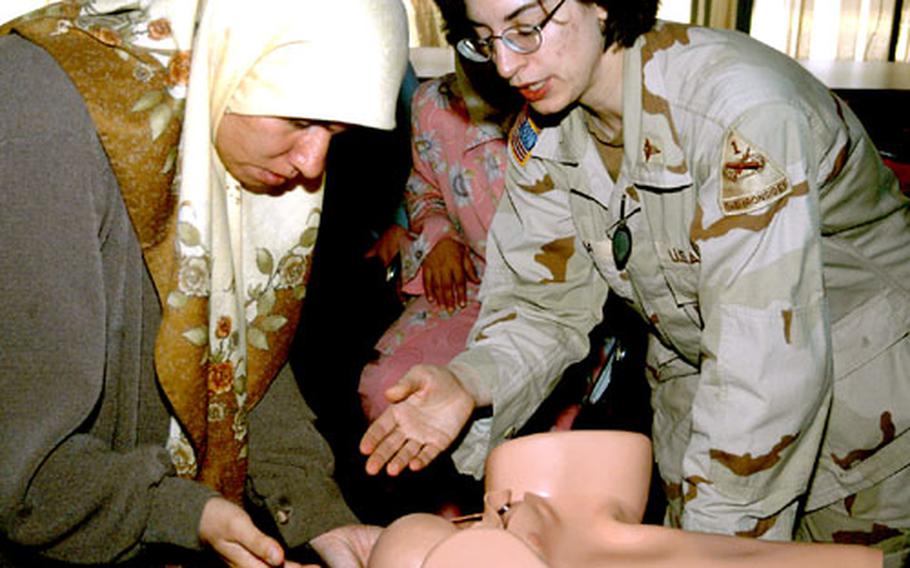 BAGHDAD &#8212; U.S. Army doctors are trying to repair the damage done to Iraqi medicine during the reign of Saddam Hussein when, as one doctor put it, &#8220;medicine stopped.&#8221;

The soldier/physicians held a three-day clinic this week on emergency obstetrics, and there is hope that such professional development classes will become regular events and cover a wide range of topics.

&#8220;Our doctors are very interested in these courses,&#8221; said Dr. Hassan Baker, general director for the ministry of health.

Dr. Noorhan Solomon, a gynecologist, said only people selected by the government were allowed to leave the country for additional training. The others were stuck with a stagnant profession as the rest of the world moved on.

The initial class was called &#8220;Advanced Life Support in Obstetrics,&#8221; a lesson in dealing with emergencies related to pregnancies or births. It was provided by the American Academy of Family Physicians, which waived the usual fees for the course.

About 30 doctors showed up, nearly all of them women because religious sensitivity in the country means nearly all gynecologists are female.

Dr. (Capt.) Lisa Foglia, now assigned to the 1st Armored Division but ordinarily at Landstuhl Regional Medical Center in Germany, said the course is designed to develop teaching methods so the doctors in attendance can pass along the information.

Dr. Ramzia Gabiee, head of the primary health care department at the health ministry, said the teaching methods impressed her.

Knowledge, she said, she can get from a book.

There is much for the Iraqi doctors to learn about obstetrics care. For example, they use Valium as an anesthetic during births, not epidurals, which are common in America. The use of ultrasounds in Iraq is extremely limited.

The Americans plan to leave behind some of the teaching tools so they can be used in future classes. They had mannequins, CD-ROMs and other teaching tools for the class.

They expect the Iraqi doctors to quickly catch up with what more than two decades of a dictatorship has cost them.

&#8220;Their knowledge level is the same as ours,&#8221; said Foglia, but they have not had access to new methods and new technology.