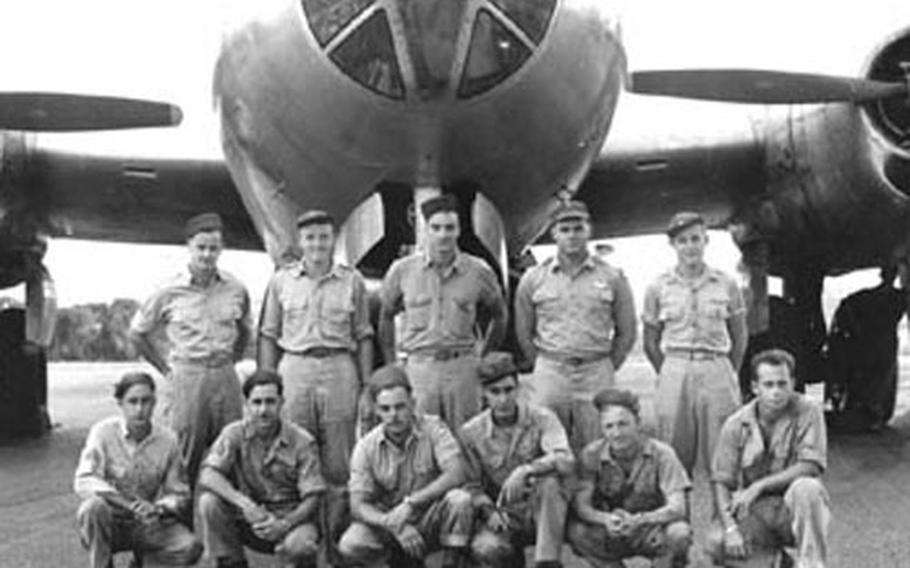 An undated photo of 11 U.S. aircrew members from a B-29 that crashed April 2, 1945, into a mountain at Yugimachi in Ome City, Japan, during World War II. Five American servicemembers were killed while six others parachuted to safety but were taken prisoner of war. (Courtesy of Noriharu Kawashima)

An undated photo of 11 U.S. aircrew members from a B-29 that crashed April 2, 1945, into a mountain at Yugimachi in Ome City, Japan, during World War II. Five American servicemembers were killed while six others parachuted to safety but were taken prisoner of war. (Courtesy of Noriharu Kawashima) In July 1999, a Japanese landowner built a monument to the U.S. aircrew members killed April 2, 1945. The first joint memorial ceremony involving U.S. and Japanese participants is scheduled for April 2. (Courtesy of Noriharu Kawashima) The remains of the five U.S. airmen killed in the B-29 crash were dug up by the U.S. military and flown to Jefferson Barracks National Cemetery in St. Louis after World War II. (Courtesy of Noriharu Kawashima)

YOKOTA AIR BASE, Japan &#8212; Sixty-one years ago a World War II U.S. B-29 bomber slammed into a mountain in Ome, a city near Yokota Air Base.

In the late 1990s, Tetsuya Nomura bought the land where the Superfortress went down and later erected a monument to &#8220;ease the spirits of those killed,&#8221; according to Masao Abe, community relations chief for Yokota&#8217;s 374th Airlift Wing&#8217;s public affairs office.

&#8220;He was concerned because nothing had been done to honor the memories of what happened there,&#8221; Abe said.

And each year on April 2, Nomura has held a small memorial to commemorate the tragedy. This year Nomura will have a lot more company. Japanese organizers are planning the first joint memorial ceremony Sunday for crewmembers who died in the crash.

Col. Paul Montgomery, the 374th Airlift Wing&#8217;s vice commander, is expected to attend the event, scheduled for 1:30 p.m. at the memorial monument in Ome.

The Buddhist service will be marked by a floral wreath presentation and the pouring of American bourbon in a libation offering. Ome&#8217;s mayor will speak and officials will read a message from the family of a crewmember who died.

According to Abe, the 11-member crew of the B-29 nicknamed Filthy Fay II left Saipan on April 2, 1945, to take part in the bombing of a Nakajima airplane factory in Tokyo. They were assigned to the Army Air Corps&#8217; 498th Bombardment Group, 73rd Bomb Wing.

After the raid, the four-engine bomber was shot down by anti-aircraft fire and crashed into a mountain near Yoshino Village in Nishitama District. The site was later renamed Yugimachi, Ome City.

Five American servicemembers were killed, while six others who parachuted to the ground were taken prisoners of war. Two died in captivity; four were liberated and returned to the United States. A village men&#8217;s association gathered the bodies of the airmen who died and buried them in Sokuseiji Temple. After the war, the U.S. military exhumed the remains and sent them to Jefferson Barracks National Cemetery in St. Louis.

Second Lt. John Houghton, the flight engineer, suffered third-degree burns in the crash and was taken prisoner. Nine days later, his condition became so grave that a Japanese doctor injected him with poison to let him die.

Sgt. Kenneth Petterson, a gunner, hid in the Kurosawa Mountains until April 18 but surrendered because of hunger. Taken to Shibuya Army Prison on May 9, he was killed in an air raid.