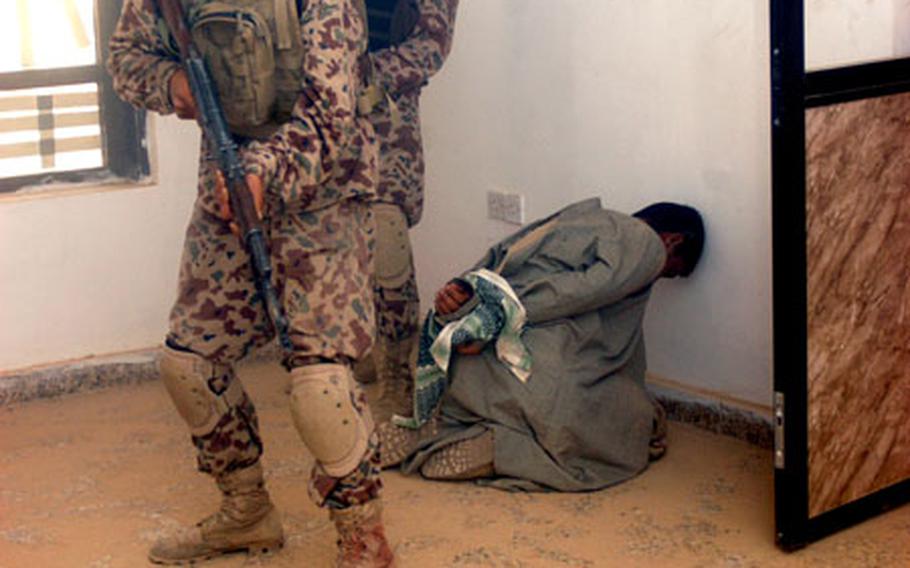 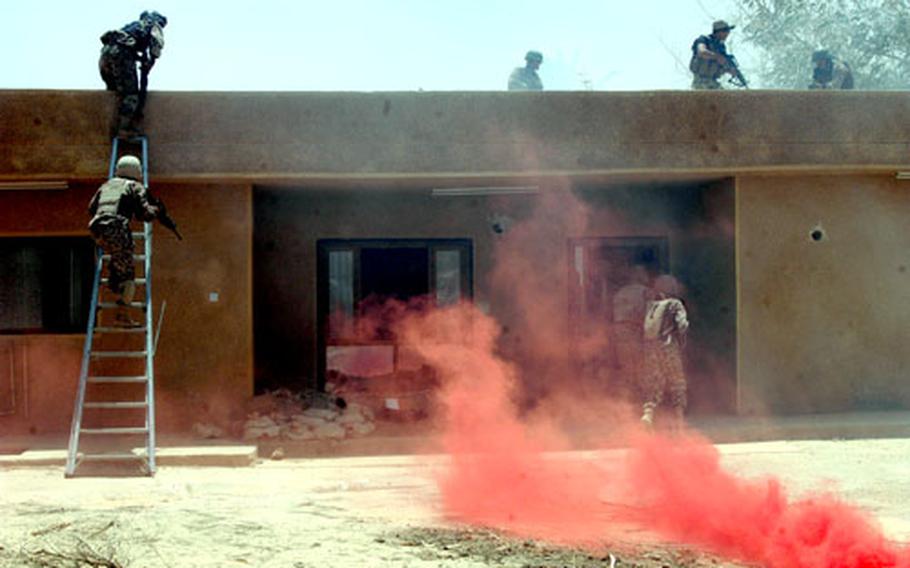 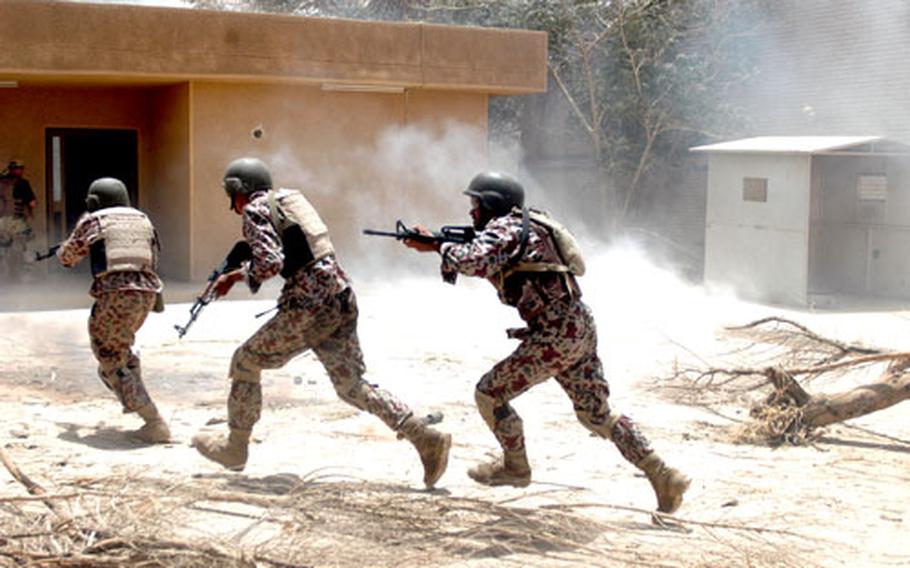 Iraqi soldiers and police rush a building as part of a training exercise. (Kevin Dougherty / S&S) 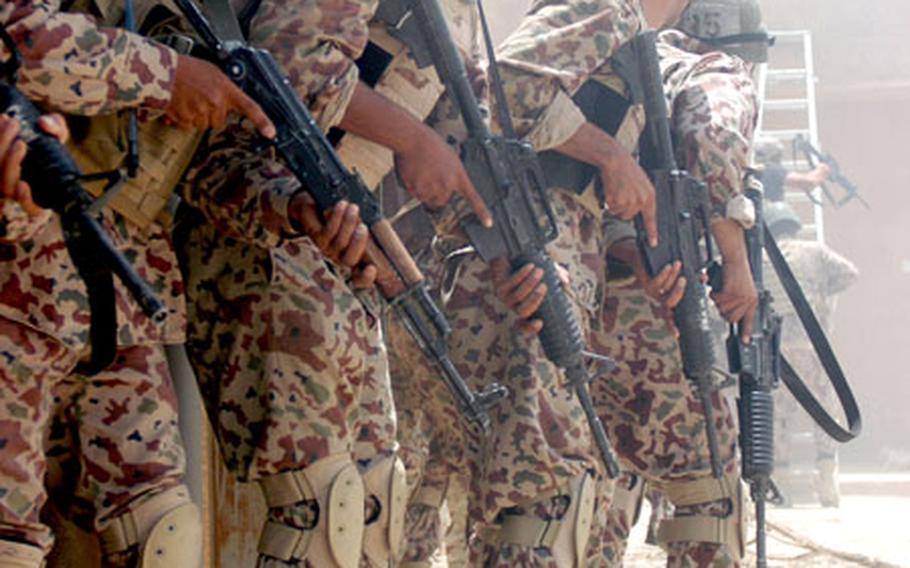 Iraqi soldiers and police prepare to rush a building as part of a training exercise. The day after this exercise, the commandos graduated from the course. (Kevin Dougherty / S&S)

(Editor&#8217;s Note: This is the fourth in a series on training Iraqi security forces. Part I, Part II and Part III appeared June 24-26).

BAGHDAD &#8212; On the day before graduation, the students were in a joyous mood, having just completed their final exam. They danced and sang in the school&#8217;s rear parking lot. A few of the students even surrounded one of their favorite teachers and hoisted him into the air, where assault rifles were already waving high above their heads.

It&#8217;s mid-June, and another class of soldiers and policemen has graduated from the Iraqi Commando School in Baghdad. Since September, more than 400 Iraqi security forces have finished the 21-day program taught by a cadre of their countrymen and monitored by U.S. Special Forces advisers.

In addition to the commando course, there is a staff officer&#8217;s course as well as a program for snipers. On the front end of it all is a 14-day evaluation course for Iraqi civilians and soldiers wishing to join the ISOF Brigade.

Specialized training for Iraqi security forces is also occurring near Amman, Jordan. For the Iraqi Special Operations Force, much of the curriculum focuses on counter-terrorism. In a few years, Jordan may well become the primary training venue for Iraqis and other allied special forces in the region.

The supplemental appropriations bill President Bush signed last month set aside $99 million for a new training facility in Jordan, according to Lt. Col. David Youngberg, an Army comptroller based in Baghdad.

The U.S. Special Forces adviser assisting in the commando training back in Iraq said a far lengthier course is being considered that would represent the next evolution for the ISOF. The course would likely last several months, although an elite corps of ISOF has already spent considerable time in the field with teams of Green Berets.

&#8220;I see a willingness in most of these classes, a willingness to learn from the Americans,&#8221; Niblett whispered as he watched a member of his team instruct about a dozen Iraqi officers.

An hour later, the decibel level was considerably higher as Iraqis in the commando course charged toward a few empty buildings on a nearby training site. The participants included members of the 36th Commando Battalion and Hilla Special Weapons and Tactics (SWAT) team, an elite Iraqi police force.

Not all of the students looked sure of themselves as they executed the training mission, which involved the extrication of some &#8220;insurgents,&#8221; a role played by soldiers of an Iraqi support battalion.

Before a group reached the main building, one student triggered a tripwire, setting off a nonlethal grenade. A few minutes later, in the main house, one of the Iraqi teachers walked over to a student and scolded him for carelessly waving his automatic rifle around.

Iraqi commanders and U.S. military personnel involved in the program collaborate to select the Iraqi trainers. From all appearances, they&#8217;ve picked well. The trainers working with the current class radiate confidence and look and dress the part.

&#8220;With all due respect to the Americans, I think it is better that Iraqis train Iraqis,&#8221; a 26-year-old former high school gym teacher, now a member of the Hilla SWAT team, said through an interpreter. &#8220;They know the language and the culture and the way Iraqis think.&#8221;

Like their American advisers, the Iraqis in the commando course asked not to be named or photographed in an identifiable way.

One of the other students, a 37-year-old who used to sell female beauty products, thought the training was challenging, but not overly tough. It ranged from physical training and survival techniques to shooting and rappelling.