U.S. and China jockeying for space in orbit 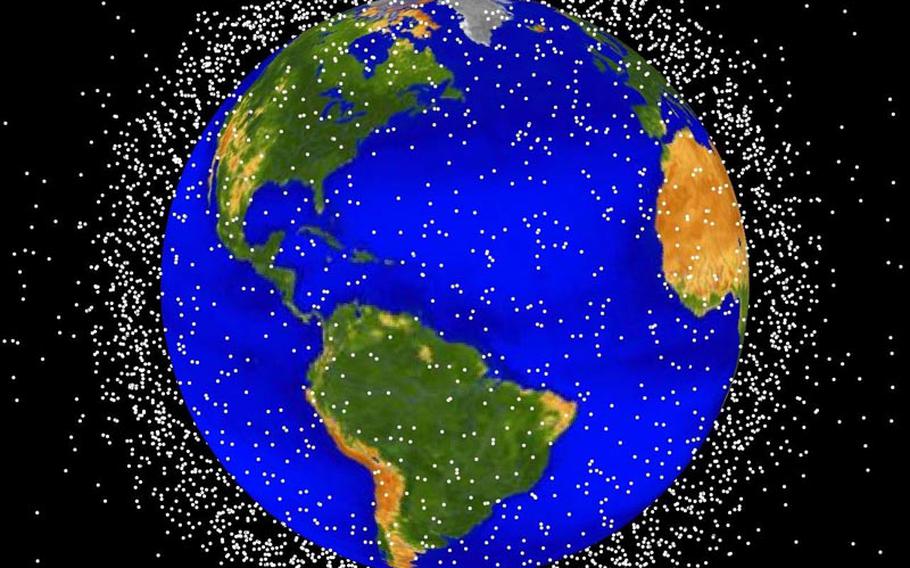 The Air Force tracks thousands of objects ? satellites and space junk ? that fill the skies above earth, as shown in this computer-generated image. (Courtesy of the U.S. Air Force)

WASHINGTON &mdash; With the icy realm of space heating up as a militarized zone, United States spy satellites need to start doing more work than simply peering down at the Earth, a top intelligence official said Thursday.

The spy satellite of the future will need to train sensors outward as well and &ldquo;be more useful by looking at what&rsquo;s around itself,&rdquo; National Reconnaissance Office director Bruce Carlson told reporters.

Near-Earth orbital space is being filled with a growing number of military satellites launched by competitors eager to challenge U.S. space dominance, he said.

&ldquo;The other countries are launching a lot of stuff &mdash; sometimes more than we do,&rdquo; he said. &ldquo;It&rsquo;s becoming very competitive.&rdquo;

China has become a particularly active, if inscrutable, player in the realm of intelligence and reconnaissance satellites.

&ldquo;That concerns us because we&rsquo;re not absolutely sure of their intent,&rdquo; he said.In that uncertain environment, monitoring adversaries&rsquo; orbiters could be key to defending U.S. satellites and keeping vital systems for GPS navigation, communications and tactical imagery up and running in the event of confrontation.

Other nations know their own satellite systems are inferior to the United States&rsquo; in technical capabilities, Carlson said. But instead of directly competing, he said, adversaries will search for ways to neutralize U.S. strengths. That could mean shooting down a satellite &mdash; something China demonstrated when it blew up one of its own weather satellites in 2007 &mdash; or jamming signals from the ground.

Since 2008, the National Reconnaissance Office and Air Force Space Command have collaborated on the Space Protection Program, which aims not only to prevent adversaries from taking out U.S. satellites, but pays attention to a growing cloud of space junk &mdash; much of it detritus of old U.S. and Russian orbiters &mdash; that could destroy operational satellites.

Information about how the Space Protection Program actually accomplishes its aims is closely guarded, he said.

&ldquo;That&rsquo;s going to be our ace in the hole should somebody try to do something,&rdquo; he said.All the satellite jockeying points to one unavoidable fact, said military technology analyst Peter Singer, a senior fellow at the Brookings Institution, a Washington-based think tank.

&ldquo;The future of war on planet Earth is not going to stop at the edge of our atmosphere,&rdquo; he said.

About 175 of more than 900 operational satellites now in orbit are for military use, he said. Half the military satellites belong to the U.S., but the Chinese in particular are unwilling to take a backseat to the United States in using space for military operations.