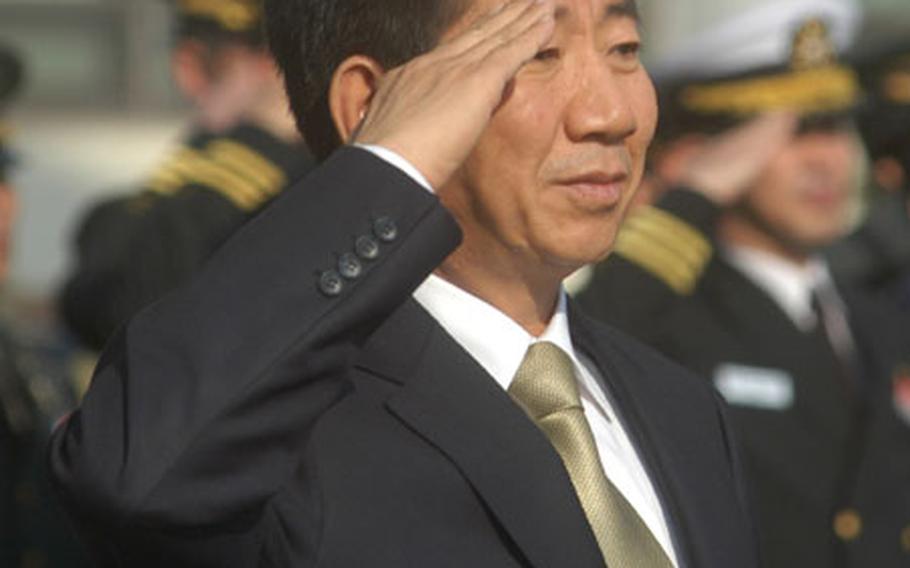 YONGSAN GARRISON, South Korea &#8212; During his first visit to a U.S. base, South Korean President-elect Roh Moo-hyun told senior American military leaders Wednesday that a strong alliance between their countries is necessary, especially with growing tension over the North Korean nuclear crisis.

&#8220;This should be resolved in a peaceful manner in close coordination with the United States, Japan, China, Russia and through the international community,&#8221; he said, referring to the North&#8217;s nuclear development.

Roh spoke through a translator in a briefing room at Yongsan Garrison&#8217;s headquarters building, just minutes after a classified discussion on the CFC&#8217;s mission.

Roh, who rode a wave of anti-Americanism while campaigning last fall, said the South Korea-U.S. partnership is &#8220;the driving force of the security of South Korea&#8221; and &#8220;the backbone of our development and prosperity.&#8221;

LaPorte said he sent Roh a congratulatory letter on his election and invited him to visit Yongsan.

Asked if Roh&#8217;s trip there was symbolic of anything following the anti-military sentiment that grew over the summer, and his tough anti-U.S. talk, LaPorte said no.

As for Roh&#8217;s message to the U.S. military during the afternoon visit, LaPorte said, &#8220;President-elect Roh made a firm and positive statement about the health and future of the alliance.&#8221;

Roh began his tour of the U.S. garrison by inspecting the U.N. Honor Guard, which paraded in front of the headquarters building. He arrived to a 21-gun salute and saluted while the nation&#8217;s anthems were played.

&#8220;Reconciliation between two Koreas would not be made possible if there&#8217;s not any firm and solid security&#8221; on the Korean peninsula, Roh said.

&#8220;I myself, and the Korean people, have great recognition and acknowledgment &#8230; that USFK is needed, and we will make our best efforts to develop further the ROK-U.S. alliance,&#8221; he said.

In a written statement, LaPorte said Roh&#8217;s visit &#8220;reaffirms our commitment to work together as partners and friends.&#8221;