Senior Airman Jason Lambert, No. 14, prepares to receive a pitch from Senior Airman Eric Baxter during a baseball game at RAF Feltwell, England. A team of servicemembers plays in a British baseball league. (Ron Jensen / S&S)

Senior Airman Jason Lambert, No. 14, prepares to receive a pitch from Senior Airman Eric Baxter during a baseball game at RAF Feltwell, England. A team of servicemembers plays in a British baseball league. (Ron Jensen / S&S) 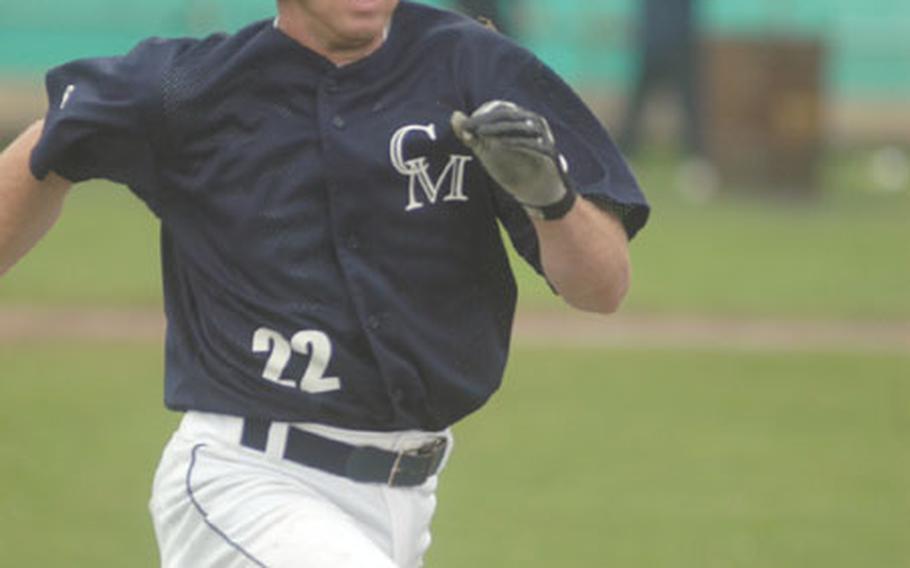 RAF FELTWELL, England &#8212; The national pastime has been exported to England.

Air Force members stationed at or near RAF Lakenheath and RAF Mildenhall can feel the pop of a ball in a leather mitt and the joy of watching the parabolic flight of a dinger.

Jeltema is player-manager of the Cambridge Monarchs, a team of active-duty servicemembers that plays in the British Baseball Federation. The team, which has been around since the 1980s, plays 21 regular-season games and joins a few tournaments throughout the year.

Over the years, the Monarchs have had players who requested an assignment in England so they could play for the team. Others are pleasantly surprised to learn about the team once they arrive.

Spc. Andrew Mabry, a member of the Ohio National Guard contingent deployed to England to provide base security, learned about the league from a notice in the base newspaper.

Tech Sgt. Michael Cleveland of the 67th Special Operations Squadron at RAF Mildenhall said he found information about the team on the Internet before he moved to England from Florida.

Cleveland, whose father, Reggie Cleveland, pitched in the major leagues, said keeping a team of military members is difficult in these times of high operations tempo.

Another team of active-duty American military members plays out of the base at Menwith Hill in northern England.

The game of baseball has been growing in the United Kingdom. It is televised somewhat frequently, especially on the North American Sports Network, which shows professional sports like football, hockey and baseball from the United States.

The British Baseball Federation has several tiers of leagues, from beginners to polished players. Ian Cox, a federation official, said the number of teams has increased each of the past four years.

Ed Bird, a British college student, plays for the Oxford Kings, a recent Monarchs opponent for a doubleheader at RAF Feltwell, the team&#8217;s home field after moving from Cambridge last year.

Baseball has nuances that make it hard to learn as an adult. Cox, who never held a baseball until he was 24, said the idea of tagging up on base after a fly ball or pop-up escaped him for a long time.

The Monarchs take advantage of that, they admitted. They expect an outfielder to hesitate before deciding where to throw the ball, so they may take an extra base.

That, of course, gives the Yanks, who grew up with baseball, an advantage. After polishing off the Kings 13-0 and 17-2 on a recent Sunday afternoon, the Monarchs were undefeated in six league games.

The Monarchs hold a practice at least once a week for those who can make it. They spend hours preparing the field before a home game and kick in a fee for equipment and the league. They may travel nearly three hours for a game.

But the opportunity to knock around the old horsehide makes the effort worthwhile and, for many, is an unexpected bonus for duty in England.

Baxter looked confused when asked why he joined the Monarchs.